The 2010 NBA Draft started the John Calipari era at Kentucky, and throughout this post, his ability to produce NBA draft picks is very apparent.

The 2010 NBA Draft had seven different players selected from the SEC.

Kentucky started out the decade with the first of many impressive drafts and had five guys taken in the first round before any other SEC players were selected.

John Wall became the first player from Kentucky and second player from the SEC taken first overall when the Washington Wizards drafted him.

The SEC improved once again and had eight different players selected in the 2011 NBA Draft.

Kentucky still had a top ten pick when Brandon Knight was drafted eighth overall by the Detroit Pistons, but they “only” had three picks overall this year with the other two going in the second round.

Tennessee had their first draft pick in nine years when Tobias Harris was selected by the Charlotte Bobcats (now Charlotte Hornets) 19th overall.

The 2012 NBA Draft had stars outside of the SEC such as Damian Lillard, Draymond Green, and Andre Drummond. 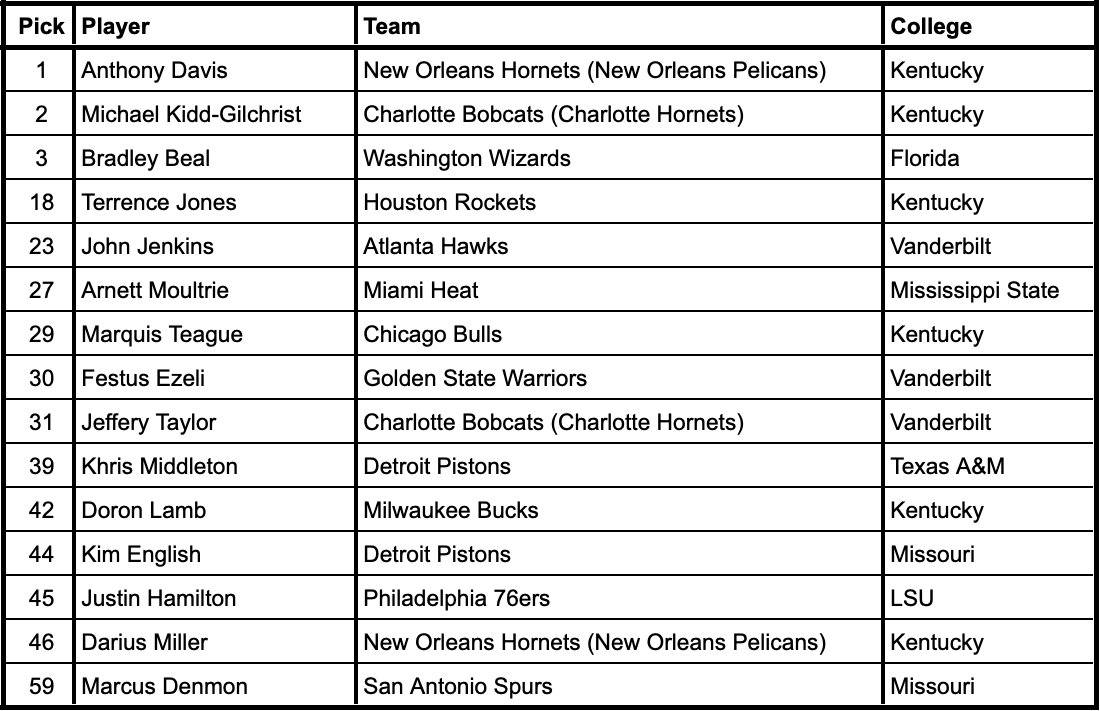 The SEC had a dominant draft with 15 players selected, including all of the first three picks.

Mississippi State had their first first-round pick since 1996 when Arnett Moultrie was selected 27th overall by the Miami Heat.

The 2013 NBA Draft had a few busts at the top, but also included stars like Giannis Antetokounmpo and CJ McCollum drafted in the top 15 picks.

After a very impressive 2012 NBA Draft, the SEC took a step back and had just five players selected in the 2013 NBA Draft.

The 2014 NBA Draft had some key big men selected like Joel Embiid at the third overall pick and Nikola Jokic down at the 41st pick.

The 2014 NBA Draft featured six SEC players with only two going in the first round, both from Kentucky.

Tennessee had multiple players drafted in the same draft for the first time since 2002 when Jarnell Stokes and Jordan McRae went 35th and 58th overall to the Utah Jazz and San Antonio Spurs.

The SEC had another good year with ten total picks, but Kentucky dominated once again with six of them.

Karl-Anthony Towns became the second Kentucky player taken first overall in the NBA Draft when he was drafted by the Minnesota Timberwolves.

Bobby Portis from Arkansas and Jarell Martin from LSU were the two other SEC players to join the four Kentucky players drafted in the first round.

The 2016 NBA Draft included players outside of the SEC like Pascal Siakam, Jaylen Brown, and Buddy Hield.

While the SEC only had six players drafted in the 2016 NBA Draft, five of them went in the first round and the last pick only fell to 34th.

The Philadelphia 76ers drafted Ben Simmons first overall making him the second player from LSU and fourth player from the SEC taken in that position.

Vanderbilt produced two first-round picks in Wade Baldwin at 17 and Damian Jones at 30.

There were only four SEC players taken in this draft with Kentucky once again making up most of them.

Sindarius Thornwell became the first player drafted out of South Carolina since 2006 when he was taken 48th overall by the Milwaukee Bucks.

The 2018 NBA Draft was full of young stars like Luka Doncic and Trae Young.

Seven players were drafted from SEC schools and five of them went in the first round.

Michael Porter Jr from Missouri fell to the 14th pick due to injury, but has just not recently started show why he could end up being a steal.

The 2019 NBA Draft, the most recent, is most notable for picks like Zion Williamson and Ja Morant. 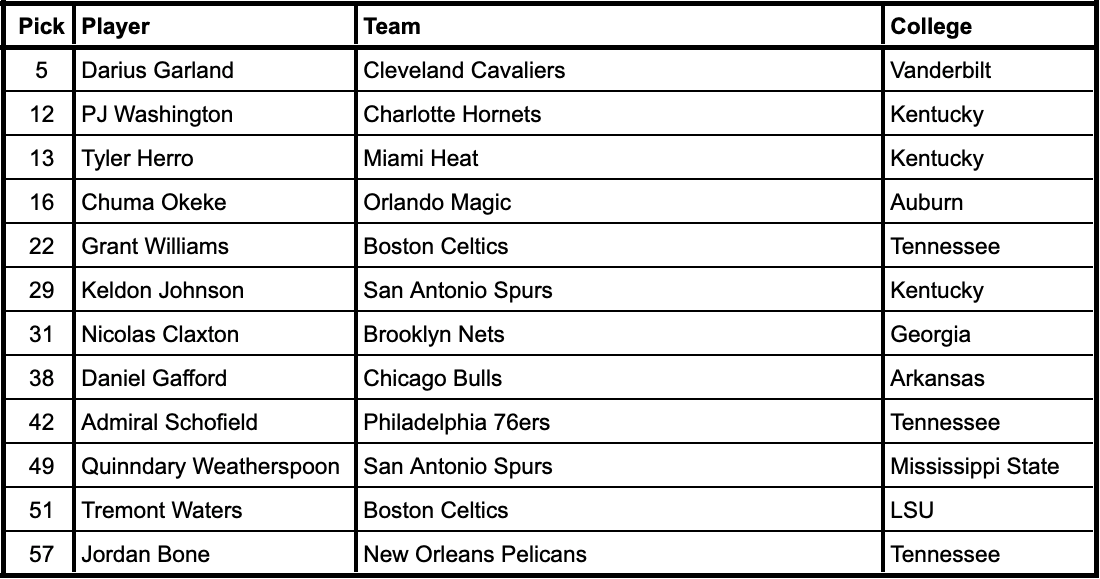 The SEC had another big year with 12 different players getting drafted including seven in the first 31 picks.

Despite being injured for most of the year, Darius Garland from Vanderbilt went fifth overall to the Cleveland Cavaliers.

Chuma Okeke snapped an 18-year drought for Auburn when he was drafted 16th overall by the Orlando Magic. 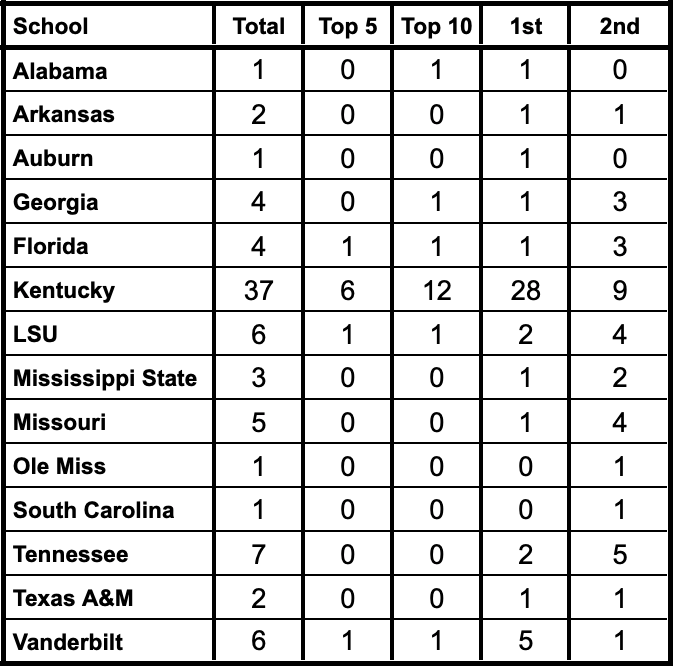 The SEC making up 13.333% of total draft picks was their best percentage and 80 total picks was the most picks since the 1980s when there were several more slots available.

This also made the second decade in a row and fifth overall where every SEC school had at least one player drafted with Alabama, Auburn, Ole Miss, and South Carolina all having a player taken.