The 1960 NBA Draft had an even 100 total selections with the first six rounds consisting of each of the eight teams picking once.

The current SEC teams had eight players selected in the 1960 NBA Draft with Kentucky having half of the selections. Tennessee, Texas A&M, LSU, and Auburn each had a single-player selected as well.

As the final SEC team remaining without an NBA Draft pick, Auburn finally had a player drafted when Henry Hart was selected by the New York Knicks with the 82nd overall pick.

The 1961 NBA Draft had 107 total selections with a format that matched previous years with the addition of the newly formed Chicago Packer (now Washington Wizards) having several extra picks at the end of the second round.

There were eight players selected from current SEC teams with the Los Angeles Lakers and New York Knicks selecting two SEC players each.

The Chicago Packers (now Washington Wizards) selecting Jerry Graves from Mississippi State was the only SEC player taken in the top-20 picks.

Jack Waters being drafted 85th overall by the Cincinnati Royals (now Sacramento Kings) was the only player from Ole Miss taken in this decade.

The 1962 NBA Draft had 102 total selections including two territorial picks at the beginning.

There were a total of six players selected from current SEC teams but South Carolina was the only team with two players drafted.

From South Carolina, Lindbergh Moody went to the Detroit Pistons with the 40th pick and Art Whisnant went to the Los Angeles Lakers with the 44th pick.

At the 96th overall pick, Jerry Carlton was the only player drafted out of Arkansas in the decade.

The 1963 NBA Draft dropped back down to just 84 total selections with a first territorial pick, a first-round for the rest of the nine teams to pick, and then six rounds where each team picks once.

With the reduction of total picks, the current SEC teams only had five players taken in the 1963 NBA Draft.

Mississippi State made up two of those picks with Leland Mitchell going to the St. Louis Hawks (now Atlanta Hawks) at 15 and Red Stroud going to the Boston Celtics at 45.

With just four players selected from curred SEC schools, the 1964 NBA Draft marked the second-fewest SEC players taken in a draft after just three players were taken in the 1954 NBA Draft.

Kentucky, Texas A&M, Missouri, and Tennessee each had one pick with Cotton Nash from Kentucky being drafted by the Los Angeles Lakers with the 14th overall pick.

The 1965 NBA Draft had 112 total selections including three territorial picks at the beginning.

There were seven players taken from the current SEC schools and all seven were from different schools.

The Los Angeles Lakers drafted three SEC players with Brooks Henderson out of Florida at 37, A.W. Davis out of Tennessee at 46, and Bob Andrews out of Alabama at 89.

These picks were the only players drafted from Alabama and Georgia in the 1960s NBA Drafts.

The 1966 NBA Draft again had 112 total selections. Each of the ten teams picked once in the first five rounds.

The 1967 NBA Draft saw and expansion to 162 total selections with 12 picks per round in most rounds.

Ten total players were taken from current SEC schools in the 1967 NBA Draft with half of them going in the top-60.

Hall of Fame coach Pat Riley was drafted out of Kentucky with the seventh overall pick by the San Diego Rockets (now Houston Rockets).

The 1968 NBA Draft saw another large expansion as there were 214 total selections with the league growing to 14 teams. 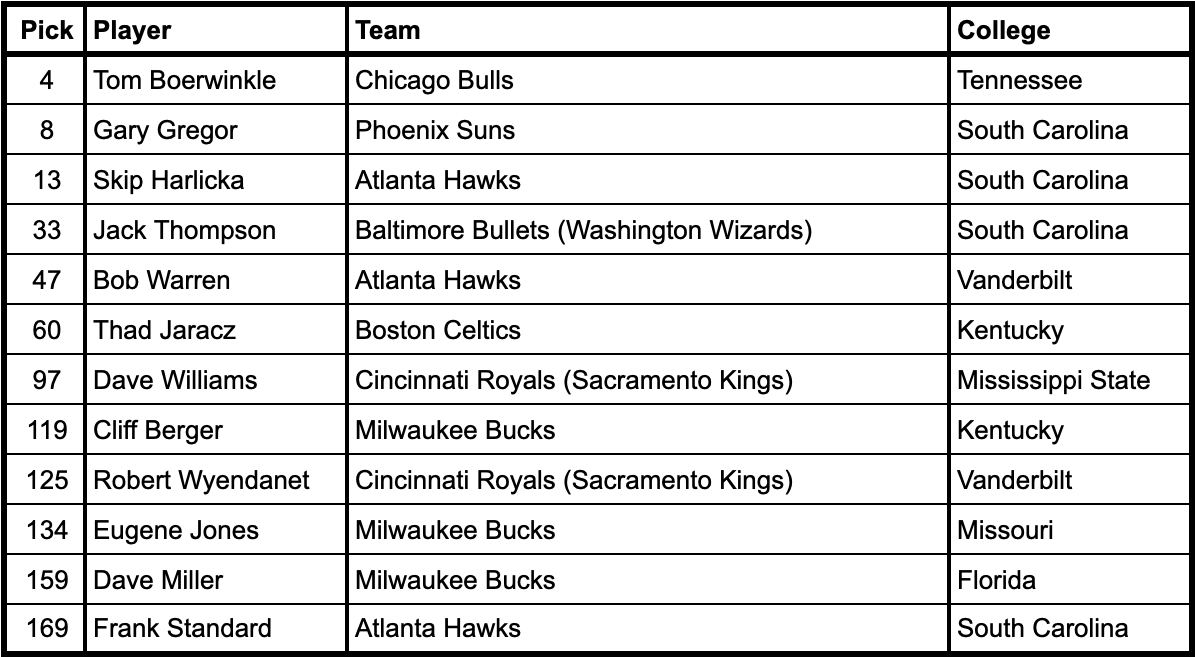 The current SEC schools had 12 total players selected in the 1968 NBA Draft with two going in the top-10.

South Carolina had four total picks in this draft including three near the top with Gary Gregor going to the Phoenix Suns at 8, Skip Harlicka going to the Atlanta Hawks at 13, and Jack Thompson going to the Baltimore Bullets (now Washington Wizards) at 33.

South Carolina’s four total picks in this draft followed up their three players taken in the 1967 NBA Draft.

Despite a large draft, the current SEC schools only had seven players taken in the 1969 NBA Draft.

Following Kareem Abdul-Jabbar, Neal Walk out of Florida was drafted second overall by the Phoenix Suns. At the time, this was tied for the highest an SEC player had been taken in a draft. 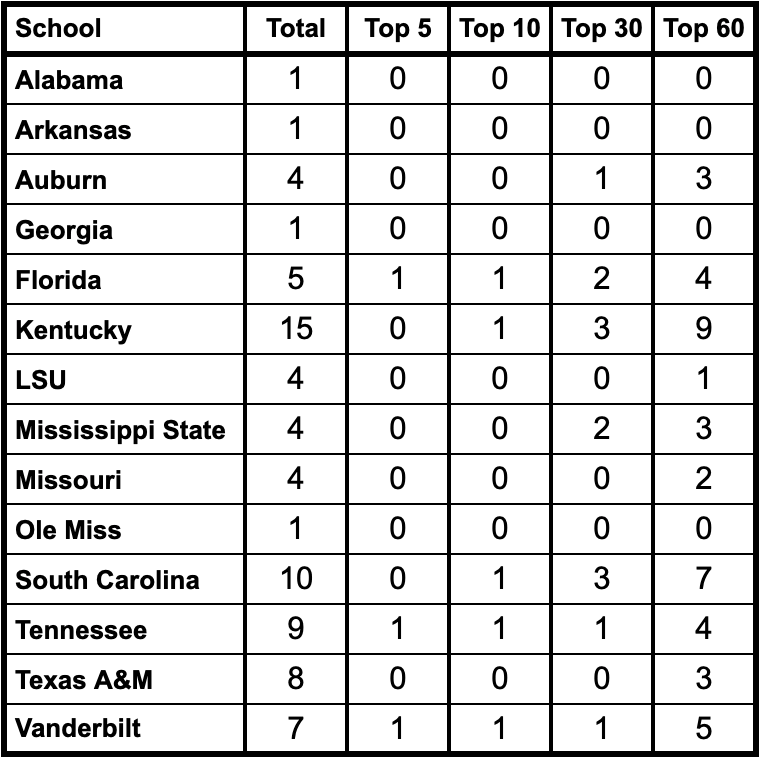 Kentucky once again led this decade with 15 total picks but only nine went in the top-60. South Carolina was not too far behind with ten total draft picks.

There were again just three top-5 picks out of the SEC in the 1960s with Florida, Tennessee, and Vanderbilt each having one.

The 1960s NBA Drafts saw every SEC school have a player selected in the decade at least once.