The 1990 NBA Draft still had 54 total selections in two rounds for the 27 NBA franchises at the time.

This was a rather slim draft for the SEC with just four players being selected. However, each of the four players was taken in the first round.

Mahmoud Abdul-Rauf out of LSU was the first guy off the board in the SEC when he was selected third overall by the Denver Nuggets.

As the 20th pick in the draft, the Minnesota Timberwolves selected Gerald Glass, making him the all-time highest draft pick out of Ole Miss.

The 1991 NBA Draft once again had two rounds and 54 total selections with Dikembe Mutombo being the eventual best player from the draft after he was selected fourth overall by the Denver Nuggets and went on to play 18 seasons in the NBA.

With just two selections, this is the fewest players drafted out of current SEC schools in the history of the NBA draft.

The 1992 NBA Draft still had only 54 selections, but had big names outside of the SEC such as Christian Laettner and Alonzo Mourning going in the top three picks.

The SEC bounced back from just two picks the year before and produced nine total selections for this draft.

Shaquille O’Neal became the first number one overall pick from the SEC when the Orlando Magic drafted him out of LSU.

Arkansas also set a program record for most picks in one year when four guys were drafted, including three in the top-25.

The 1993 NBA Draft was headlined by Chris Webber and Penny Hardaway in the first three picks.

LSU capped off their streak of 16 NBA Drafts in a row with at least one player selected, which is still a program and SEC record. It’ll be difficult for LSU to match that feat, and Kentucky, who currently has a 12-year streak is the only SEC program that could break the record.

The 1994 Draft had Jason Kidd, Grant Hill, and Juwan Howard as notable picks outside of the SEC.

There were five total SEC players taken with one from each of Auburn, Kentucky, South Carolina, Missouri, and Georgia.

With Wesley Person being the brother of Chuck Person and Charles Claxton being the father of recent draft pick Nicolas Claxton, there were two family ties to come out of Auburn and Georgia respectively in this one NBA Draft.

The 1995 NBA Draft was the first year that the league expanded to 29 teams with 58 total selections in the draft.

The 1996 NBA Draft is often considered one of the best NBA Drafts off all time and had notable players such as Allen Iverson, Ray Allen, Steve Nash, and the late Kobe Bryant. 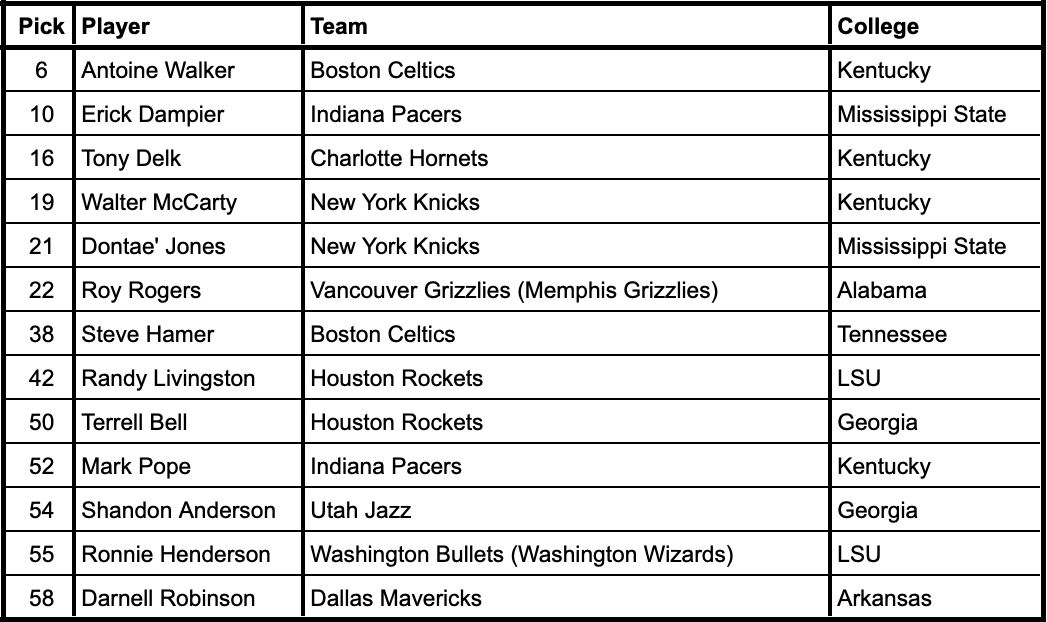 The 1996 NBA Draft was also very good for the SEC with 13 different players selected from seven different schools including six players going in the first round.

The 13 players taken set a record for the SEC in the modern NBA Draft that was not broken until 15 players were taken in the 2012 NBA Draft.

After a dominant National Championship run, Kentucky had four players drafted with three going in the top-20 and Antoine Walker going as high as sixth overall to the Boston Celtics.

The 1997 NBA Draft only had 57 total selections but included Tim Duncan going first overall to the San Antonio Spurs and Chauncey Billups going third overall to the Boston Celtics.

There were only three total SEC players taken in this draft but both Ron Mercer and Derek Anderson from Kentucky managed to go in the top-15.

The 1998 NBA Draft had one of the worst busts when Michael Olowokandi was taken number one overall by the Los Angeles Clippers.

There were just four players picked from current SEC schools with only Florida’s Jason Williams going in the first round at seventh overall.

The 1998 NBA Draft was most notable for Shawn Marion, Elton Brand, Manu Ginobili, and Jason Terry with all of those guys except for Ginobili going in the top ten.

There were just three players selected but two players, Jumaine Jones from Georgia and Scott Padgett from Kentucky, were able to squeak into the first round going 27th and 28th overall, respectively. 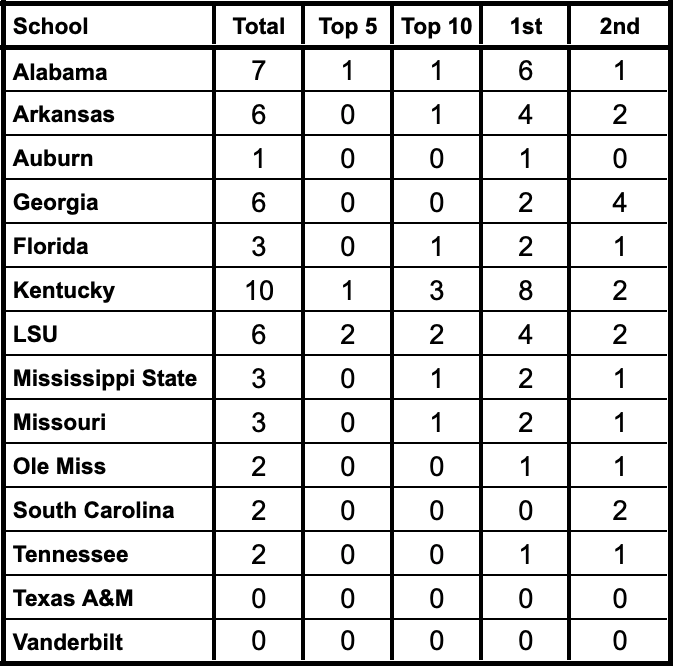 Outside of the 1996 NBA Draft and a few top five picks, the 1990s were a fairly quiet year for the SEC’s NBA Draft production.

Kentucky again had the most players taken with eight of their ten draft picks going in the first round.

All teams except for Texas A&M and Vanderbilt had at least one player taken in an NBA Draft in the 1990s decade.