The 1980 NBA Draft had 214 total selections with the first six rounds expanding to 23 picks per round. 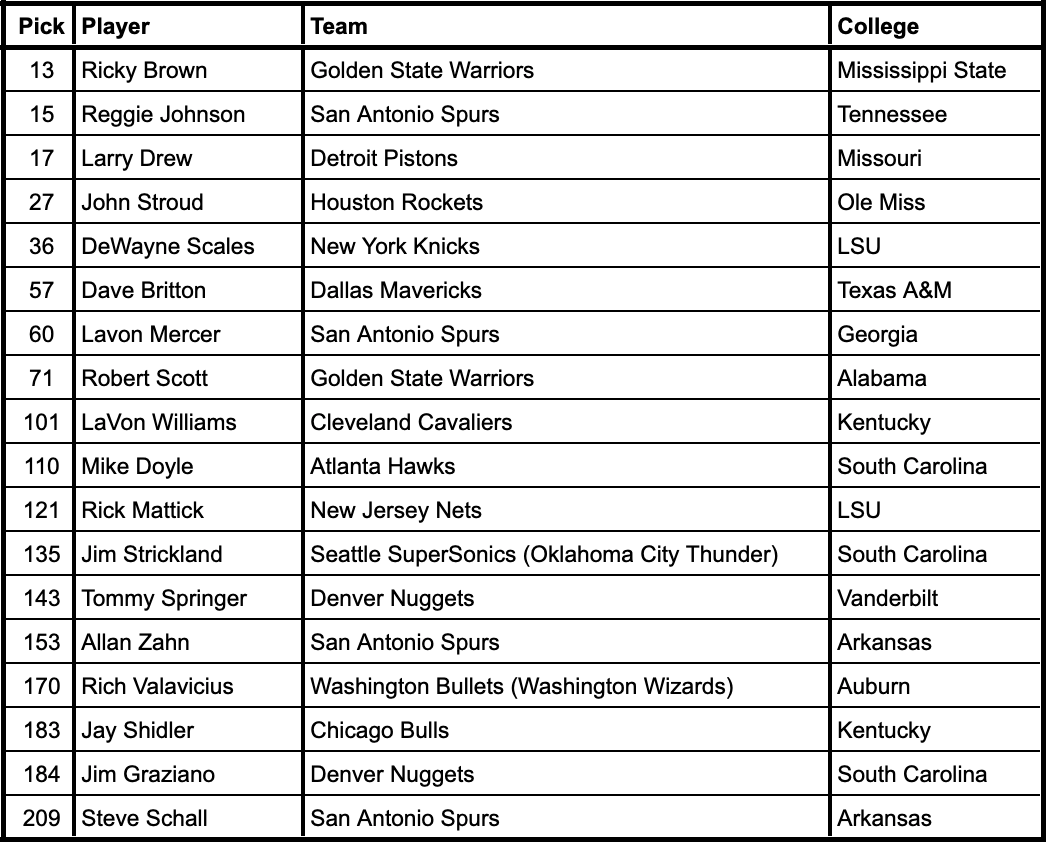 There were 18 players from current SEC schools taken in the 1980 NBA Draft with every school being represented except for Florida.

The San Antonio Spurs got a handful of SEC players in 1980 with four different picks from Tennessee, Georgia, and Arkansas ranging from the 15th pick down to the 209th pick.

The 1981 NBA Draft had 223 total selections with an almost identical format to the year before.

There were 16 different players taken from current SEC schools in the 1981 NBA Draft but none were selected in the top-25.

LSU led the way with four different players being drafted ranging from the 40th pick to the 101st pick. 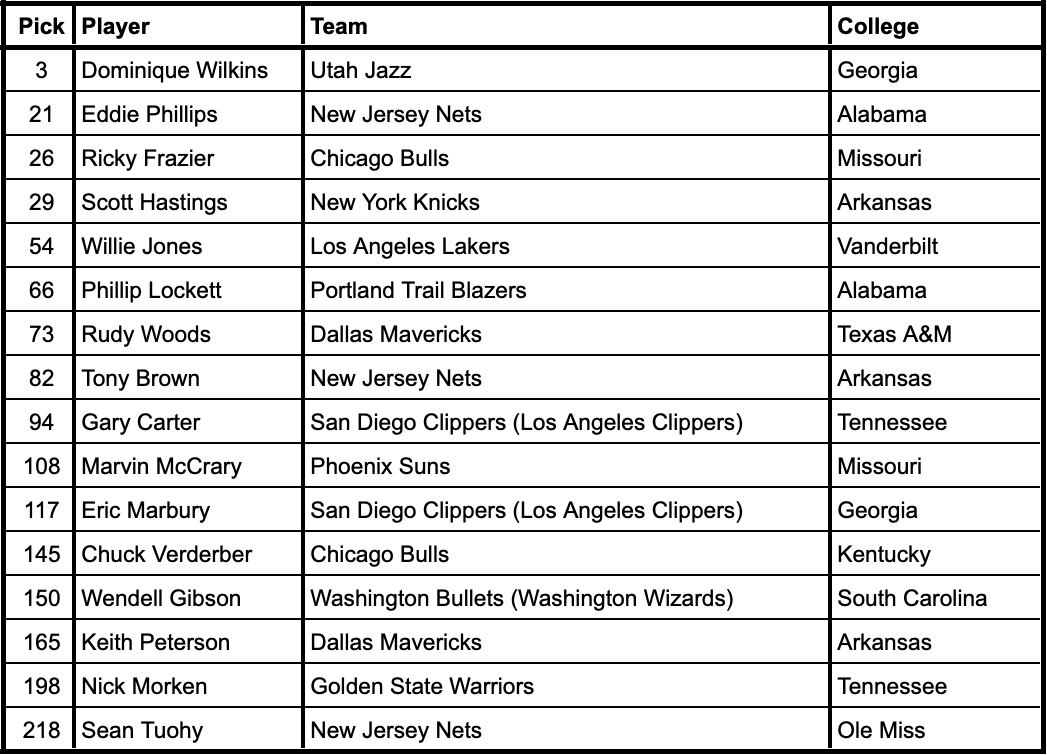 From the current SEC schools, 16 players were drafted ranging from the 3rd overall pick down to the 218th pick. 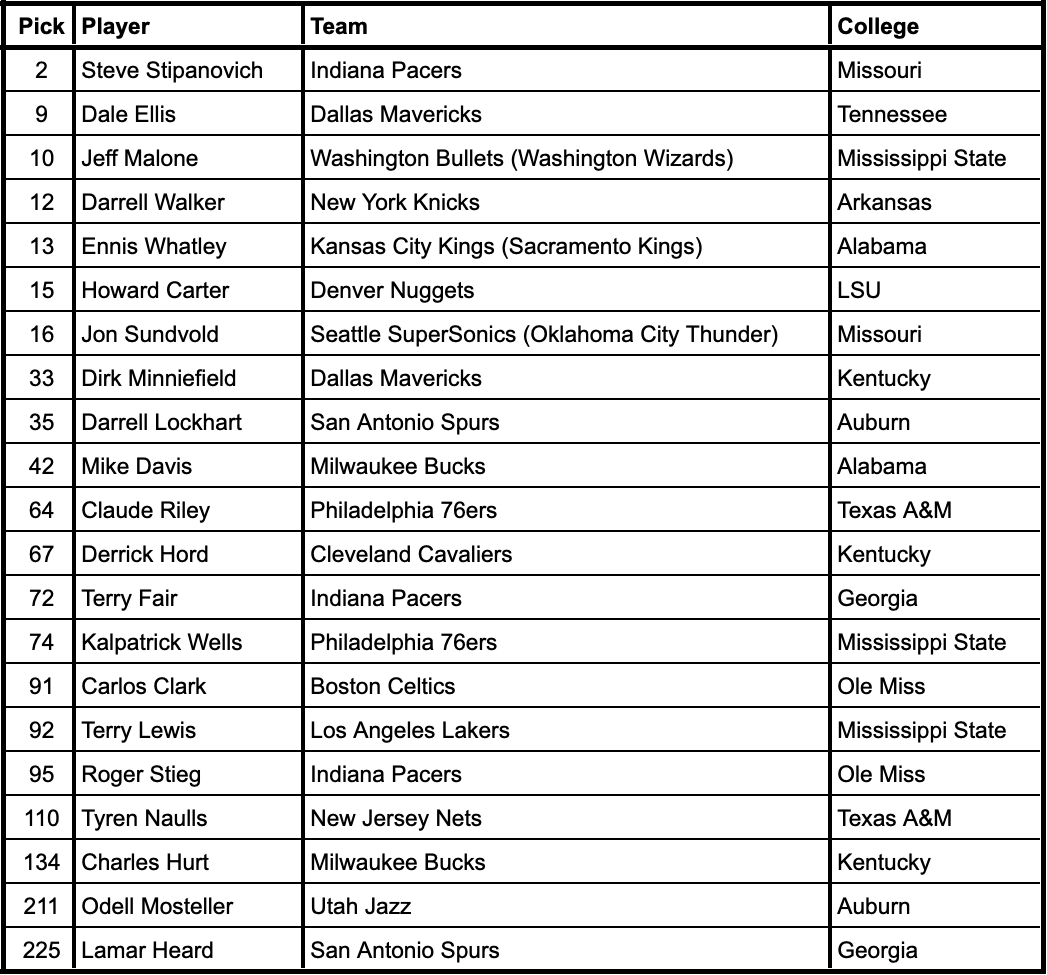 Dale Ellis from Tennessee and Jeff Malone from Mississippi State also got drafted in the top-10 at ninth and tenth respectively.

There were seven different players taken in the top-20 with ten going in the top-60. 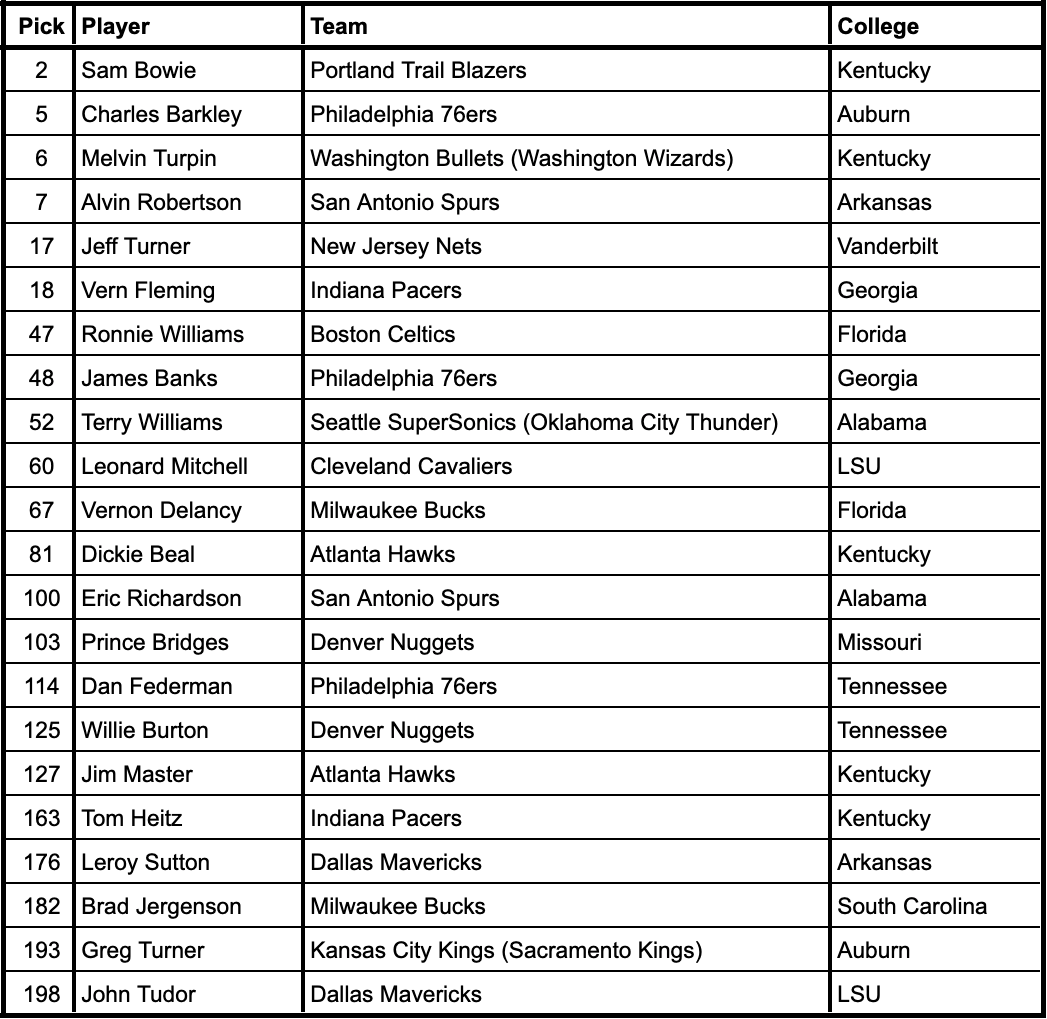 The current SEC schools set a new record for most players selected in a single draft with 22 players picked in the 1984 NBA Draft.

While Sam Bowie is most known for being selected ahead of Michael Jordan, he was also one of two Kentucky players to go in the top-10 of the draft when Melvin Turpin was also drafted sixth overall by the Washington Bullets (now Washington Wizards).

There were four players taken in the top-10 picks including Charles Barkley from Auburn and Alvin Robertson from Arkansas in addition to the two Kentucky players just mentioned.

The 1985 NBA Draft had 162 total selections and Patrick Ewing out of Georgetown went first overall to the New York Knicks. 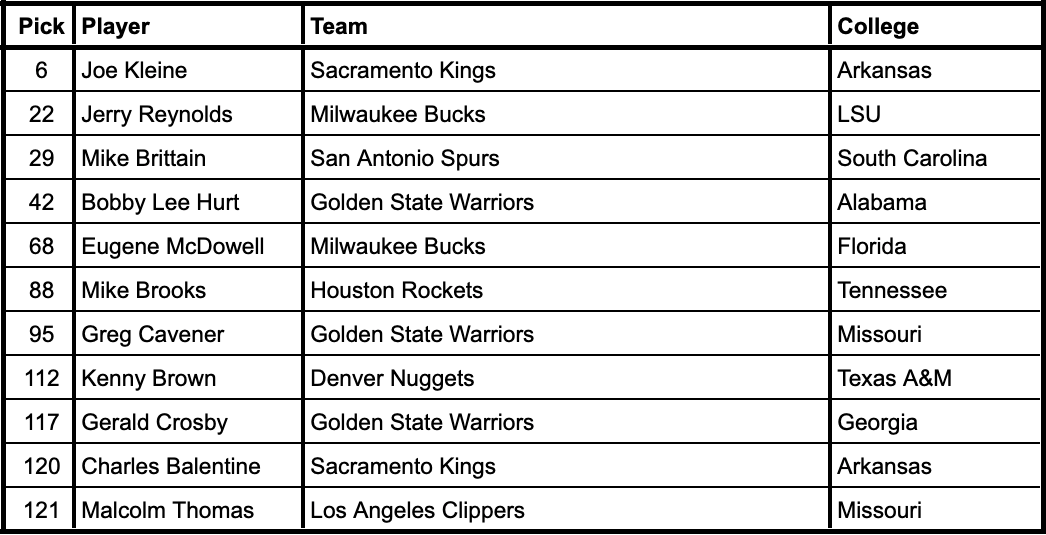 Half the amount of the previous year, only 11 players were selected from current SEC schools in this draft.

Arkansas made it two consecutive years with a player taken in the top-10 when Joe Kleine was drafted seventh overall by the Sacramento Kings. 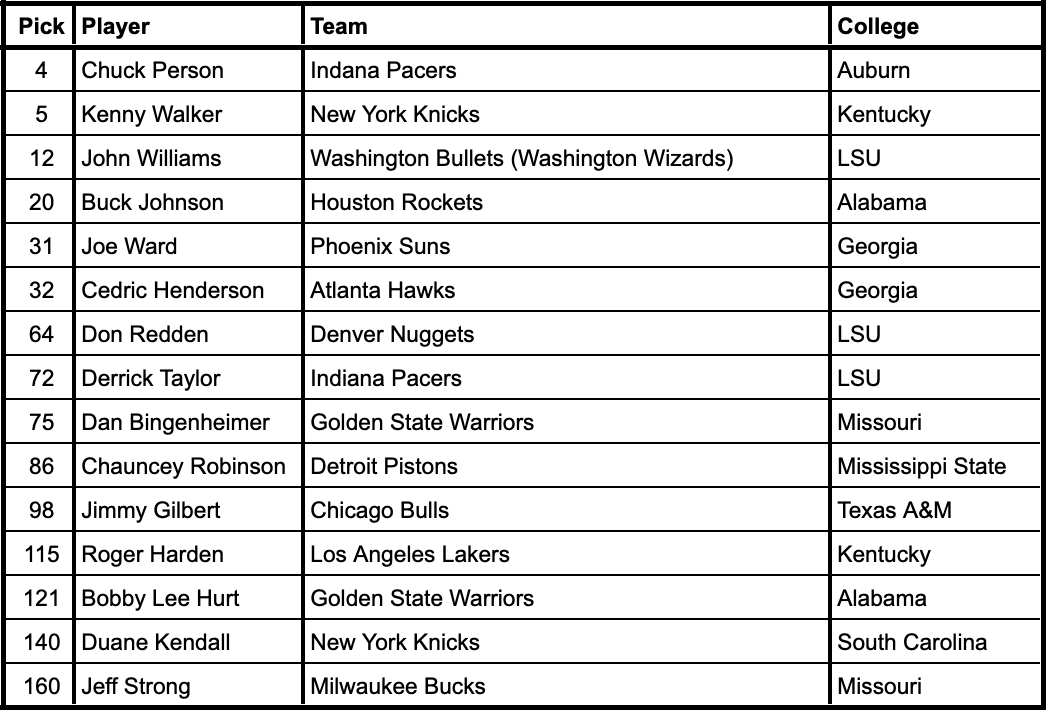 There were 15 players drafted from current SEC schools including at least two players from Kentucky, LSU, Alabama, Georgia, and Missouri.

Kentucky had another top-5 pick of their own when Kenny Walker was selected fifth by the New York Knicks.

The 1987 NBA Draft had 161 total selections and was the last draft before the league started to shift to the modern draft format and make the total number of picks more concise.

The current SEC schools had 17 different players selected in the 1987 NBA Draft.

Alabama got the SEC off to quick start with the two picks inside the top-20 when Derrick McKey was drafted ninth overall by the Seattle SuperSonics (now Oklahoma City Thunder) and Jim Farmer was taken 20th overall by the Dallas Mavericks.

The 1988 NBA Draft had 75 total selections after the NBA shifted the draft format to just be three rounds. 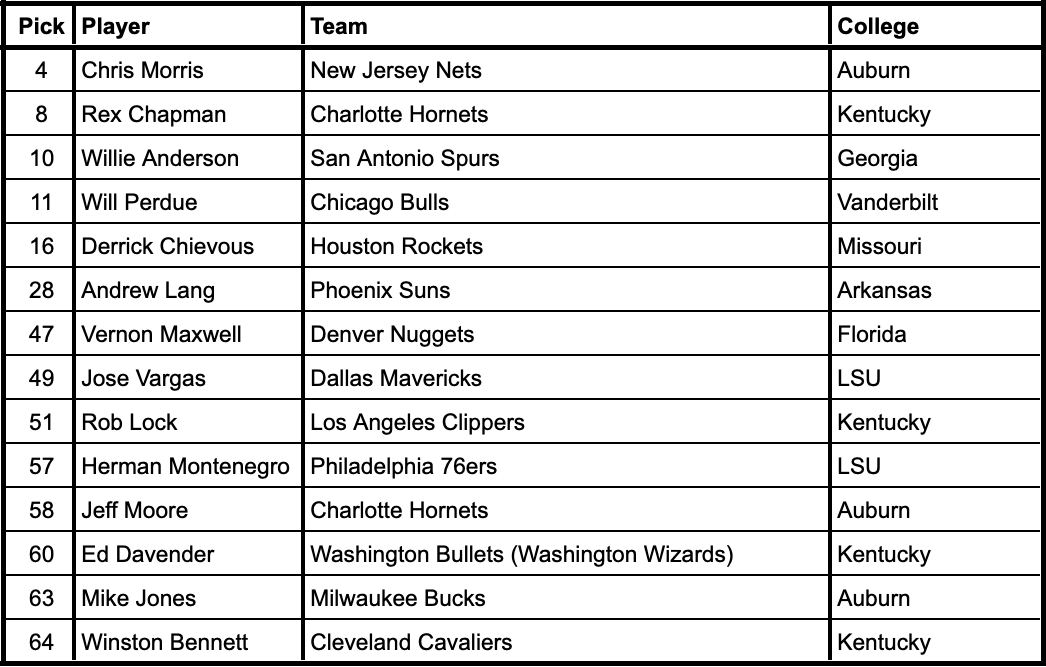 With the new, shortened draft, the current SEC schools only had 14 players selected.

Auburn had yet another top-5 pick in the 1980s when Chris Morris was selected fourth overall by the New Jersey Nets.

Rex Chapman out of Kentucky and Willie Anderson from Georgia were also selected in the top-10 at eighth and tenth respectively.

The 1989 NBA Draft had just 54 selections and marks the beginning of the modern NBA draft format with just two rounds after the league expanded to 27 teams.

The SEC didn’t have quite the success as the previous year with just eight players getting drafted in the new concise draft format.

Only one player, Byron Irvin from Missouri, was drafted in the first round when he was selected by the Portland Trail Blazers.

Missouri and Tennessee each had two players selected in the 1989 NBA Draft and made up half of the SEC selections by themselves. 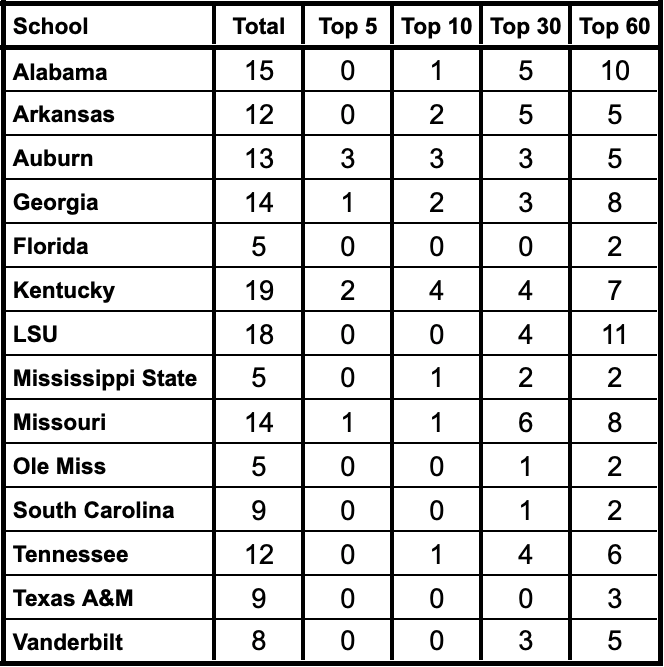 Kentucky once again had the most players selected in this decade, but many of the other current SEC programs were right there with them were Alabama, Arkansas, Auburn, Georgia, LSU, Missouri, and Tennessee all had 12 or more picks in the 1980s.

Auburn led the way with three top-5 picks throughout the decade and Kentucky also had two in the same range.

Overall, there were 15 players from current SEC schools taken in the top-10 through the 1980s NBA Drafts.