With the completion of another eventful SEC regular season, it’s time for people to release their postseason awards for players, teams, and coaches. I enjoy putting my thoughts out there and providing a slightly different way of looking at things.

In almost anything I do regarding basketball, I will never claim to be an expert on X’s and O’s and instead prefer to dive into stats and data. Now you need a combination of both to have a really good analysis, but I’ve always felt that people lean too much on the first one and trust the “eye test” a little bit too much. I’ve also sensed that people use a few good early games they watch the dictate a little too much of their decision and make up their mind on things, postseason awards, in this case, just a few weeks into the season.

Stats do not tell the entire story, but I think with the right stats you can get a better starting point than just going off of the games that you watch and what you think that your eyes are telling you. I try to watch just about every SEC basketball game each year, and this year I think I was able to fully focus on watching at least half with even more on in the background while I did other things. But even with all of that consumption, I still can’t take in every game, therefore my “eye test” is already not as valuable.

That’s where I prefer to use stats. I will never be able to watch every game, but I can easily track stats for every game and keep up with them as the season progresses. This allows me to keep an eye on interesting teams and players throughout the year that might not be getting a ton of recognition because TV or commentators don’t want to show or talk much about them, for whatever reasons.

There are some downsides to a stats first approach, but that’s why I still try to watch as much basketball as I can and try to accurately appreciate players (and sometimes teams) that just do the things that are hard to see in any stats well. With the various advanced metrics I’ve added over time, I think there is less and less that doesn’t show up on the stat sheet, but there are still plenty of other things that need to be seen in context when evaluating players for awards like this, in my opinion.

Just like with my preseason awards, I have selected just five players per team and tried to make each team resemble a real group of players that could be on the court at the same time, so generally there are at least two forwards and two guards on each team. The SEC is almost always a guard-heavy league, so that leads to more guards getting left off the All-SEC teams and that’s probably the case with mine.

Also, with the weird season, I did decide to set a minimum of 12 games played to be considered for the All-SEC teams, except for the freshman team. This means that players like Sharife Cooper, Dylan Disu, and Emanuel Miller did not make any of my All-SEC teams, despite each of those guys being in my top-10 players for most of the season.

I did not just use my Player Nice Rating to determine the All-SEC teams, but it was my strong starting point because I believe that the formula I use already does a good job of factoring in a variety of advanced all-around stats that determine good players and then each result is normalized against other players in the league. For reference, this was my final top 25 players at the end of the regular season: 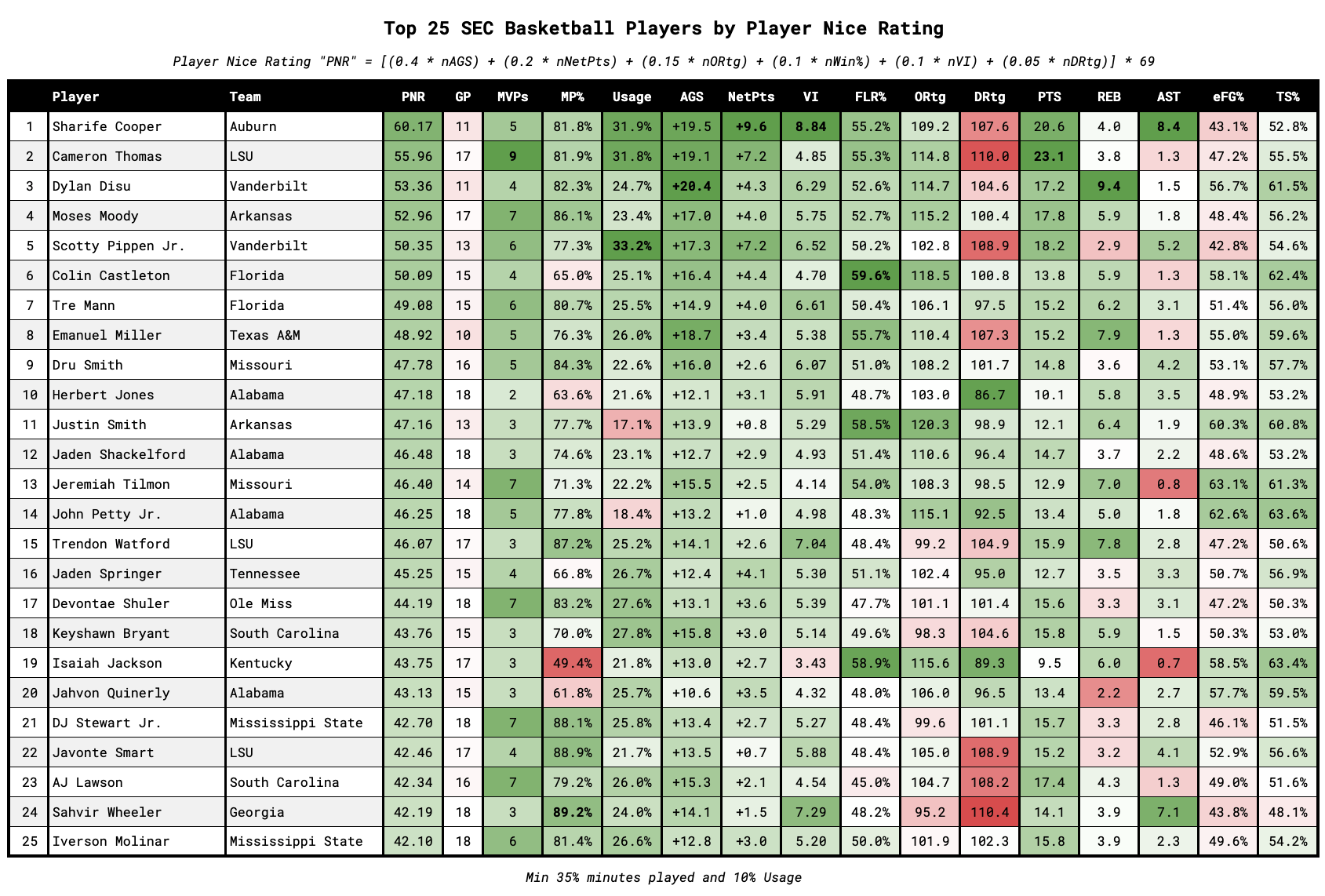 With all of those caveats, here are my 2021 SEC postseason awards:

Aside from a few spots where my position limitations affected which team a player is on, each of my teams is listed in order of how I would rank those guys. For instance, I have Cameron Thomas, then Moses Moody, then Scotty Pippen Jr., then Herbert Jones, then Jeremiah Tilmon as the five best players in the SEC this season.

Sharife Cooper did not meet my minimum requirements for making the All-SEC teams, but he held the top spot in my player rankings almost the entire time he played, and not many people came close to him at times. If he had played all year, he might have been on the All-SEC first team and could have been the best freshman, but I have him on just the All-SEC Freshmen Team to at least recognize him for his fantastic play this year when he was healthy.

Other players that I highly considered for the final spots on the All-SEC Third Team, that were eligible under my minimum game requirements, were DJ Stewart Jr., AJ Lawson, and Darius Days.

SEC Player of the Year

SEC Freshman of the Year

SEC Defensive Player of the Year

SEC Coach of the Year

SEC Sixth Man of the Year

For SEC Coach of the Year and SEC Sixth Man of the Year, it came down to Alabama versus Arkansas, just like at the top of the standings, and ultimately I sided with Alabama’s representatives in both.

While I think Nate Oats inherited a more talented roster, the ability to completely get them to buy in on defense and become a truly dominant defense on top of his beautiful offense gave him the edge. He and Eric Musselman both surpassed the high expectations I had for their teams, and Musselman arguably did more with more newcomers and fewer certainties coming into the year, but ultimately, Alabama leading the league all year, and then ultimately winning the SEC regular season title made me go with Oats.

JD Notae was a close second for SEC Sixth Man of the Year, but I ultimately went with Quinerly because he narrowly beat out Notae in a handful of stats I favor, including Adjusted Game Score (+10.6 to +10.3), Net Points (+3.5 to +3.4), Versatility Index (4.32 to 3.88) while having better efficiency ratings, shooting percentages, and ultimately being a better scorer and facilitator.

Mike White also deserves an honorable mention in the SEC Coach of the Year category for what he and his team were able to accomplish after Keyontae Johnson went down. I’ve been hard on Mike White as a coach, and there were still some concerning moments this year, but overall, I don’t think anyone would have expected Florida to be sitting where they are now after Johnson went down and the other setbacks they had throughout the year.