Last week, I released my “way too early” preseason power rankings for SEC basketball teams. Now to follow that up, here are my preseason all-conference teams as well as my predictions for player awards.

While it made it harder to decide on teams, I believe in having all-conference teams that only have five players per team and resemble an accurate mix of players that could be run out onto the court at once. In this case, each team has three guards and two frontcourt players. Because of these guidelines, there are quite a few quality guard players that were left off of the three teams, and I plan to have a follow-up post covering the players that were also considered for these teams but didn’t quite make the cut.

Throughout this post, I reference stats form last year for the returning players. Each stat also shows where they rank amongst returning players for SEC games only, or full season in a few instances where a player missed time and the full season stats and ranking better represents that player’s value.

Like a lot of my posts and analysis, a lot of these decisions were based heavily on stats, but I made sure to also point out where a player is included because of things that aren’t perfectly reflected through statistics and I believe that I used a broad enough group of advanced statistics that players on these teams are qualified through “the eye test” as well. I’m sure this alone will lead to a lot of disagreement from others, and I know that I’ll miss a few freshman or players that had small roles last season that have breakout seasons, but I think that’s expected with any attempt at picking the best players for a basketball season before a single game has been played.

With that being said, here are my preseason All-SEC teams and predictions for postseason player awards.

Keyontae Johnson was the lone player that made the coaches All-SEC First Team last season and is returning for the 2020-2021 season. That alone gives him a good shot to find himself on the first team once again, but he also will likely have an even bigger role for the Gators with higher expectations now that Kerry Blackshear Jr. and Andrew Nembhard are gone.

John Fulkerson ended up being the best offensive threat for Tennessee last season, and in his final year, I expect he’ll expand on that and be an even bigger leader this season for the guys that had the opportunity to develop last season as well as the talented freshmen class joining them in Knoxville.

John Pett Jr. placed his name in the 2020 NBA Draft originally but opted to return to Alabama where he will once again be a major focal point of the offense and dangerous shooter from outside.

BJ Boston comes to Kentucky as the highest-ranked freshman in the SEC and 5th-ranked player in the country. With just Dontaie Allen returning to the backcourt after redshirting last season, Boston will get a chance to make an instant impact for the Wildcats and will be one of many key freshmen expected to step up quickly to make Kentucky as good as they usually are.

Jaden Shackelford made the All-Freshman Team last season and I was shocked to see just how much he contributed statistically despite playing alongside likely first-round pick, Kira Lewis Jr. in the backcourt.

Trendon Watford made the All-Freshman Team last season and opted to return for his sophomore season where any improvement will establish himself as one of the best players in the SEC overall and a key piece as LSU looks to keep up their success competing for conference championships.

While Trendon Watford will be expected to help anchor LSU’s frontcourt, Ja’Vonte Smart returns for his Junior season as LSU’s best guard. Smart will have some competition with 5-star, top-25 freshman Cameron Thomas, but Smart should still be the guy that means the most to LSU’s overall success.

Dru Smith was another player that shocked me a little bit when looking at where he ranks amongst returning players. Smith will be one many key returning players for Missouri who will give the Tigers plenty of experience to hopefully finally find success under Cuonzo Martin.

Terrence Clarke joins BJ Boston as the only other top-10 freshman playing in the SEC this season and will also be expected to contribute immediately if Kentucky is going to successfully rely on a loaded freshman class even more so this season.

I currently have Kentucky as one of the favorites to be the best team in the SEC this season along with Tennessee, but Olivier Sarr being eligible is a big part of that expectation. If Sarr is granted immediate eligibility by the SEC after transferring from Wake Forest, he would immediately become one of the best bigs in the SEC after having success in the ACC.

Devontae Shuler is already one of the returning guards in the SEC based on last season’s stats, but I also expect him to take an even bigger step forward as he is expected to fill the shoes of Breein Tyree who was the second-leading scorer in SEC games last season. If Shuler can elevate his game to replace or exceed Tyree, he will be one of the best guards in the SEC and give Ole Miss a chance to be one of the better teams in the league.

Jemaine Cousinard will join A.J. Lawson in anchoring South Carolina’s backcourt next season and while I think A.J. Lawson might be the better NBA prospect, Cousinard brings back some impressive stats from last season and if he can build on them, I think he’ll ultimately be the one to have the best chance of landing on an All-SEC team at the end of the year.

Yves Pons was one of the players that I was shocked to find his stats didn’t reflect what I believe his overall skill level is, but that’s likely because he’s just a freak athlete that contributes in so many ways. In his final year at Tennessee, he’ll play a major role in establishing the Vols as one of the best teams in the SEC and country.

Pons was the SEC Defensive Player of the Year last year and with a little bit more offensive contribution, he should be a quality candidate to land on an All-SEC team by the end of the season as well.

KJ Buffen was one of several players that I struggled to decide between for this final spot, with there being a bunch of big men returning that have the potential to be really good next season but not any that shine in enough areas that I am safe picking them for an All-SEC team. Ultimately I decided on Buffen because I think his advanced stats are some of the best amongst the others being considered and he will be another major piece that helps Ole Miss jump into the top half of the league this season.

There were again quite a few guards I considered for this last spot, including fellow 5-star freshman Jaden Springer and Keon Johson heading to Tennessee. I picked Cooper for this spot because I feel that at least one Auburn player will take over as a player worthy of being on an All-SEC team at the end of the season and with almost a brand new offensive attach, Cooper has a ton of talent and is almost perfectly made for Bruce Pearl’s offense.

Cooper may not be a better guard overall than some of the other freshmen joining the SEC or young guards that started to show promise last season, but I think the situation fits him too well for his skill not to be taken advantage of. If Auburn can finish near the top of the SEC once again, Sharife Cooper will be a big reason why.

The first three guards make the All-Freshman team because I think they’re also set up perfectly enough to be some of the best players in the SEC overall, but the top freshman forwards could be a more interesting competition. There aren’t many freshmen forwards to begin with and Jackson will be given more of an immediate role than any of them, so if he can live up to his ranking and expectation, he could wind up being one of the best freshmen in the conference.

Yes, I realize it would be a little strange to see the entire All-Freshman team made up of just two teams, but as I mentioned above, there aren’t a ton of options for breakout freshmen forwards and again Thor is one of the highest-ranked prospects and will be expected to contribute early if Auburn is going to find the success they’ve quickly become accustomed to.

I’m more likely to predict that one of the other lower-rated forwards will surprise some people and end up as one of the best freshmen next season, but if I had to pick just one player Thor has enough skill and seems to be in the best situation. Count this as one of the picks I expect to get wrong in these All-SEC predictions.

Herb Jones could easily find himself on one of the main All-SEC teams above at the end of the year after choosing to return for his senior season, but at the very least I expect him to maintain his spot on the All-Defensive team because he does so many things well that help Alabama win without always showing up on the stat sheet.

At best Abdul Ado could step up replace Reggie Perry as one of the best players for Mississippi State and the best bigs in the SEC, but at the very least I do expect Ado to be a key defensive player in the league and one of, if not the, top shot blockers.

Along with Abdul Ado, Justin Minaya was another forward that I considered for the main All-SEC teams above but ultimately picked Buffen to edge them both out with the added advantage of Ole Miss’s overall success. Regardless, Minaya returns with a lot of skill on the defensive end and has the stats to prove it.

SEC Player of the Year

SEC Freshman of the Year

SEC Defensive Player of the Year 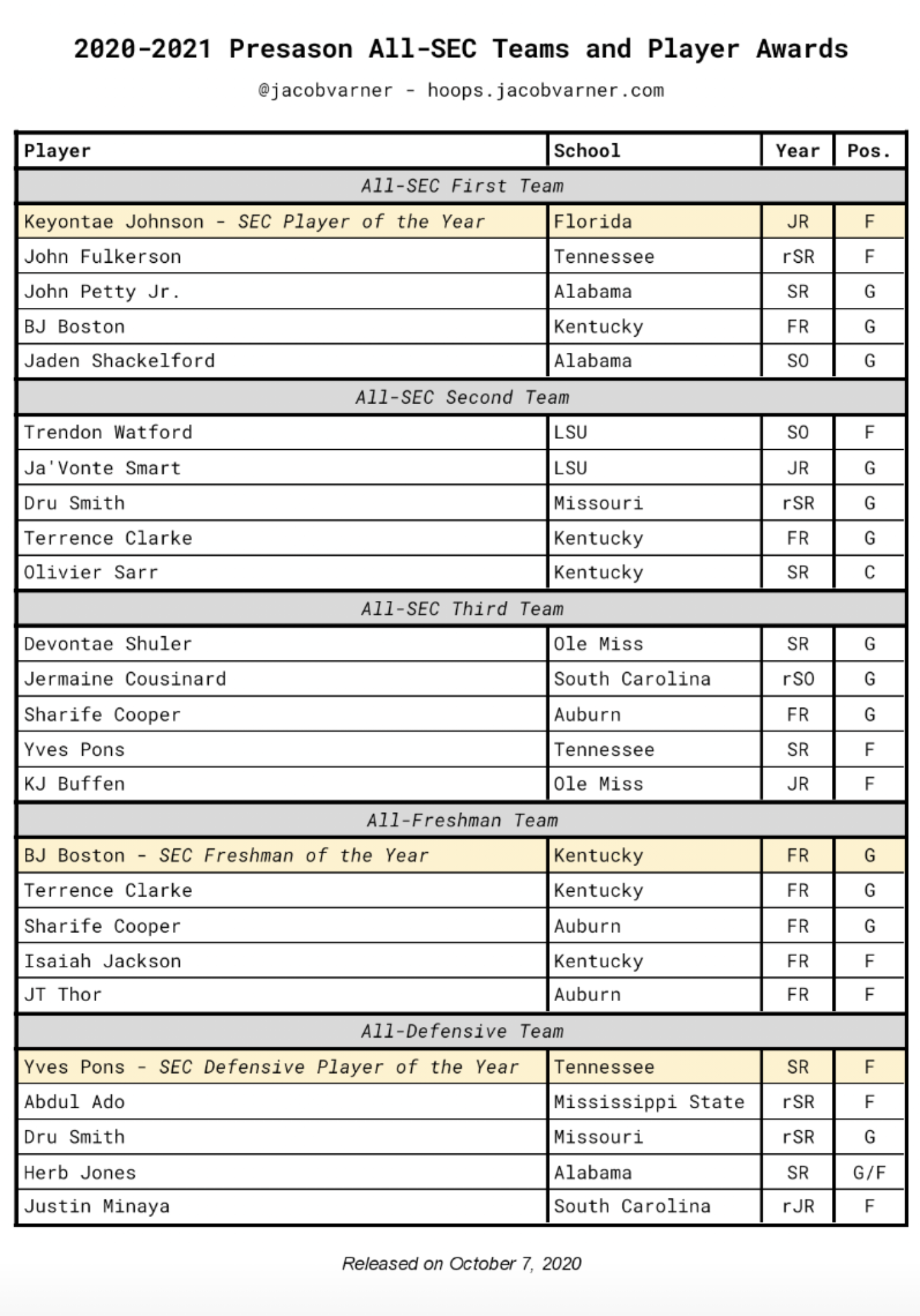