The 1970 NBA Draft had 239 total selections, which is the most selections in a single draft of all time.

There were ten total players drafted from the current SEC schools with the highest being LSU’s Pete Maravich who was drafted third overall by the Atlanta Hawks.

LSU then had Dan Hester drafted by the Atlanta Hawks as well, which gave them two draft picks in the 1970 NBA Draft along with Kentucky and Georgia.

The 1971 NBA Draft was another long one with 237 total selections. 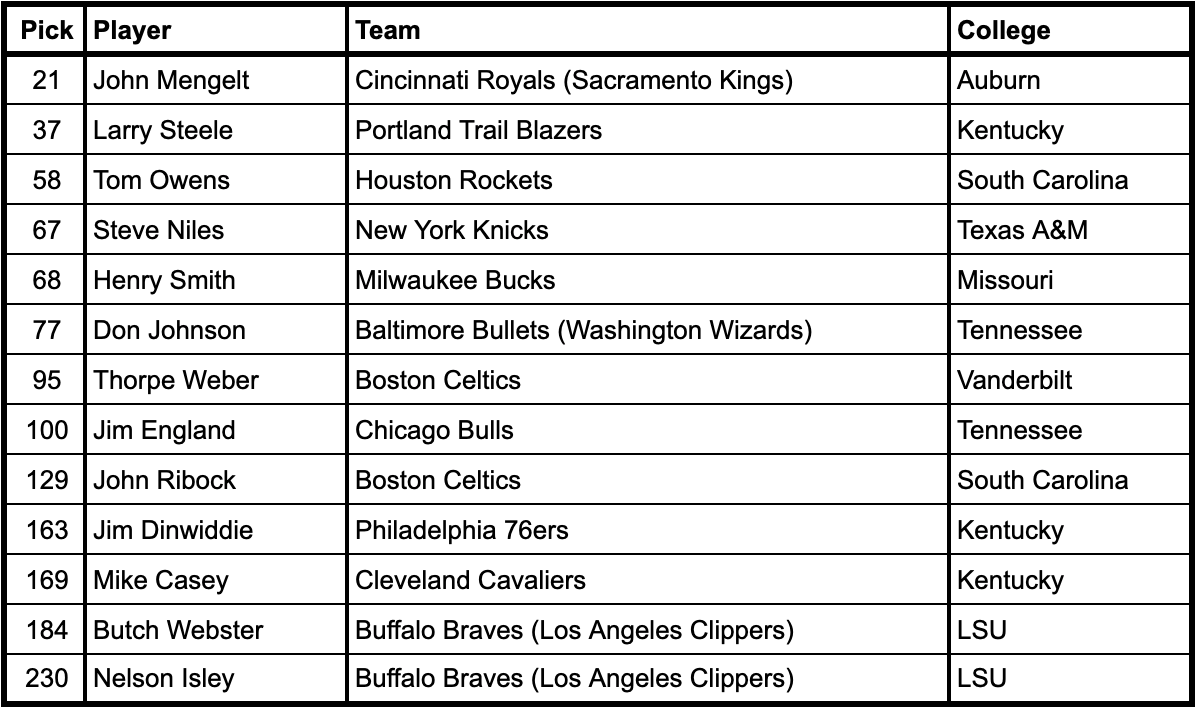 In total, 13 players were drafted out of current SEC schools with Kentucky, South Carolina, Tennessee, and LSU all having two or more draft picks each.

The 1972 NBA Draft dropped back down below 200 selections with only 198 picks throughout the entire draft.

After 13 players being taken the year before, current SEC teams only saw seven guys get selected in the 1972 NBA Draft.

South Carolina did add another top-10 pick for the SEC when Tom Riker was selected by the New York Knicks with the eighth overall pick.

The rest of the draft was pretty thin for the SEC with the six other picks all falling outside of the top-50.

The 1973 NBA Draft had 211 total selections and the early rounds have stuck to the increased amount of picks per round at 17 or more. 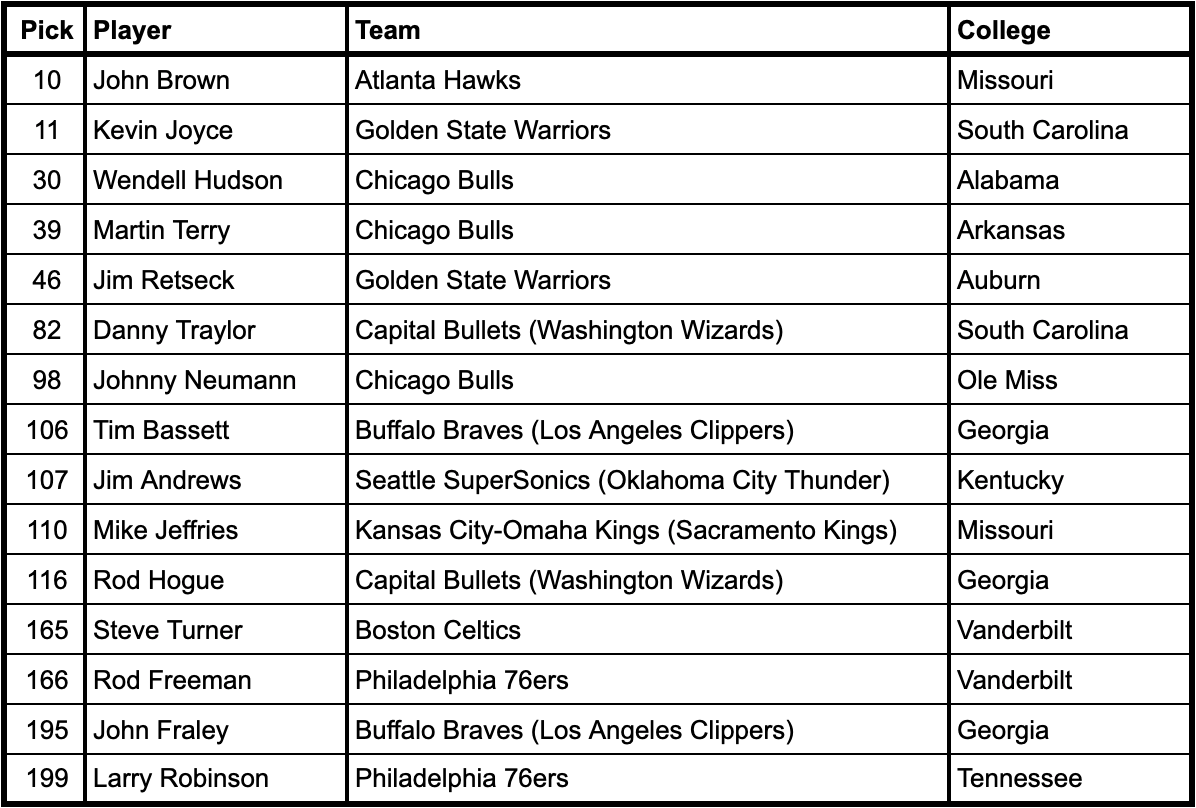 Missouri landed another top-10 pick when John Brown was selected 10th overall by the Atlanta Hawks.

This draft also set a new record at the time for the most players drafted from current SEC schools. 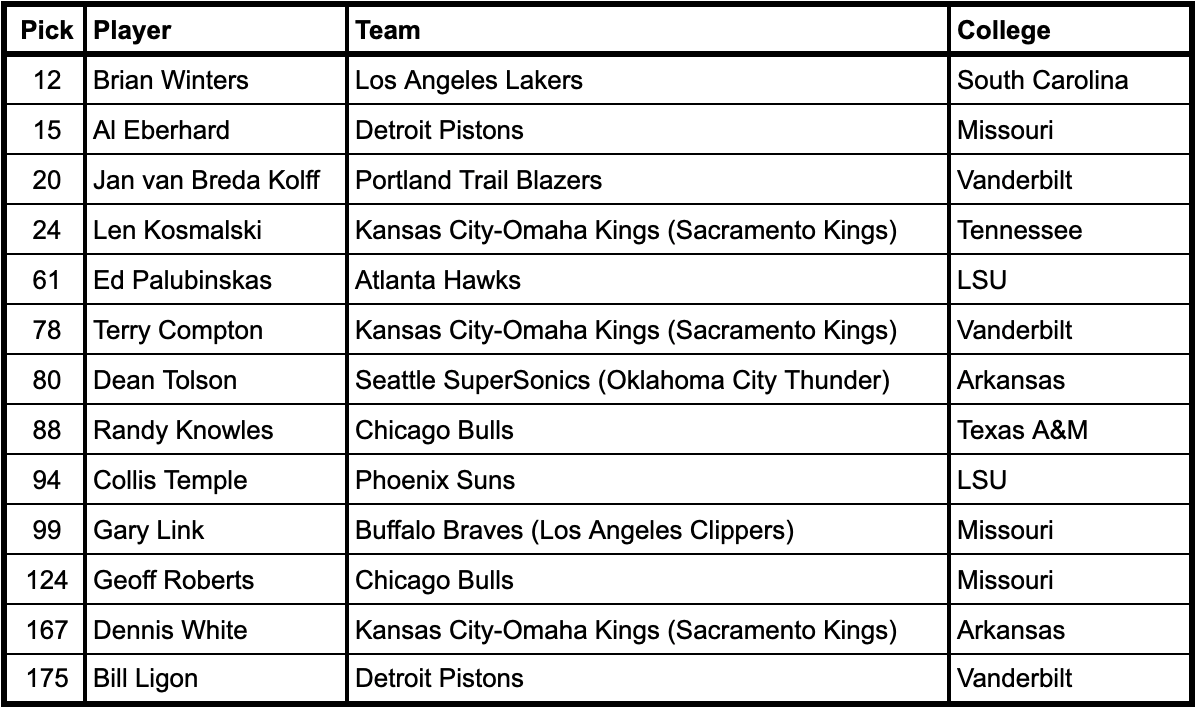 There were 13 players drafted from current SEC schools with four of them being taken in the top-25.

Missouri had three different players taken in the 1974 NBA Draft, with Al Eberhard being the highest selection when he was drafted by the Detroit Pistons with the 15th overall pick.

The 1975 NBA Draft had 174 total selections with the first eight rounds all having 18 picks each.

Nine total players were drafted from current SEC schools with Kentucky making up four of those draftees.

South Carolina once again had the first player selected amongst the SEC schools with Tom Boswell going 17th overall to the Boston Celtics.

The 1976 NBA Draft had 173 total selections with the first four rounds decreasing slightly to a consistent 17 picks per round. 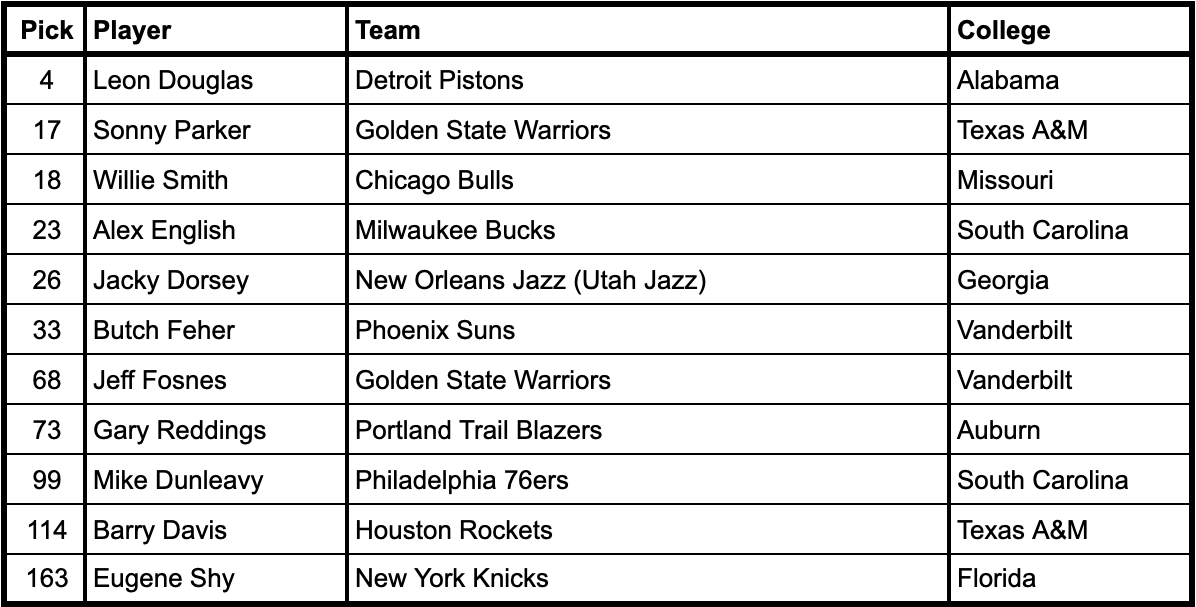 There were 11 players drafted from current SEC schools in the 1976 NBA Draft with eight different schools having a player selected.

Alabama led the way, and landed another top-5 pick when Leon Douglas was taken with the fourth overall pick by the Detroit Pistons.

There were five total players taken in the top-30 of the draft with Butch Feher from Vanderbilt landing just outside that mark at 33.

THe 1977 NBA Draft had 170 total selections with the first five rounds expanding to each have 22 picks. 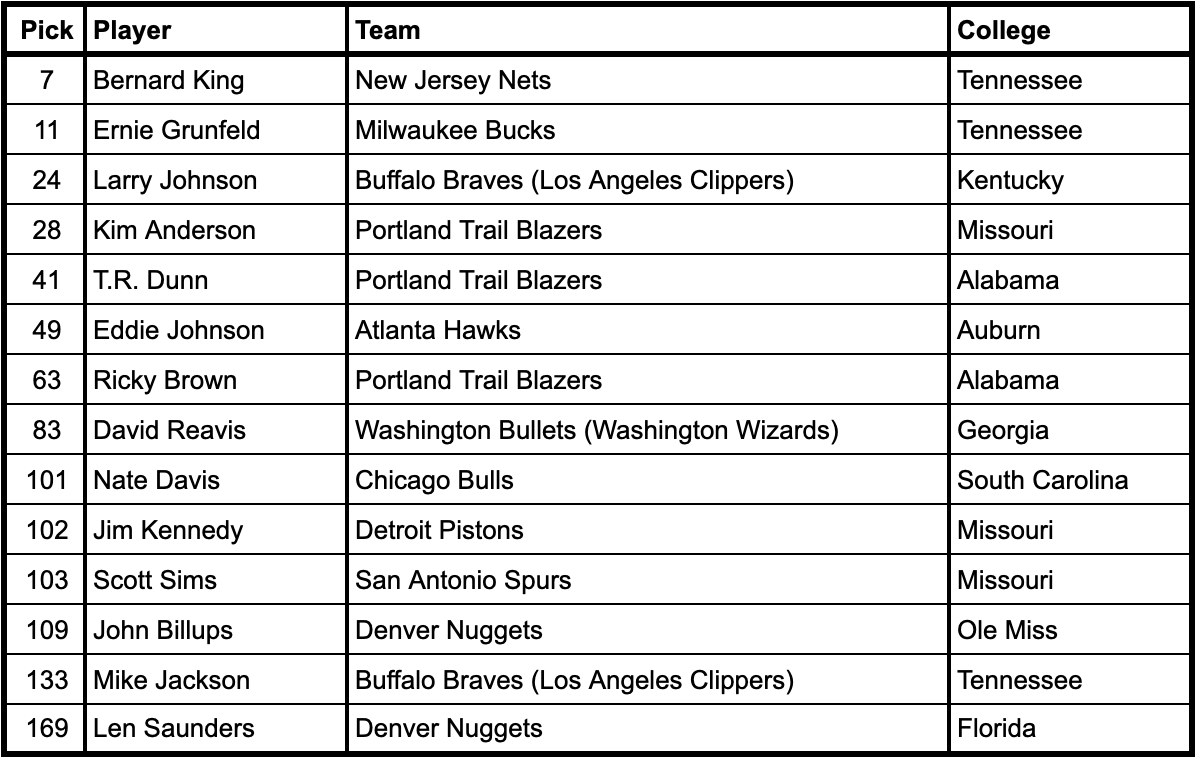 The current SEC schools had 14 different players selected with nine teams having at least one player drafted.

Tennessee had the best representation and the first two picks from the SEC when Bernard King was drafted seventh overall by the New Jersey Nets and Ernie Grunfeld was taken 11th overall by the Milwaukee Bucks.

The 1978 NBA Draft had 202 total selections with the first five rounds once again having 22 picks in each round. 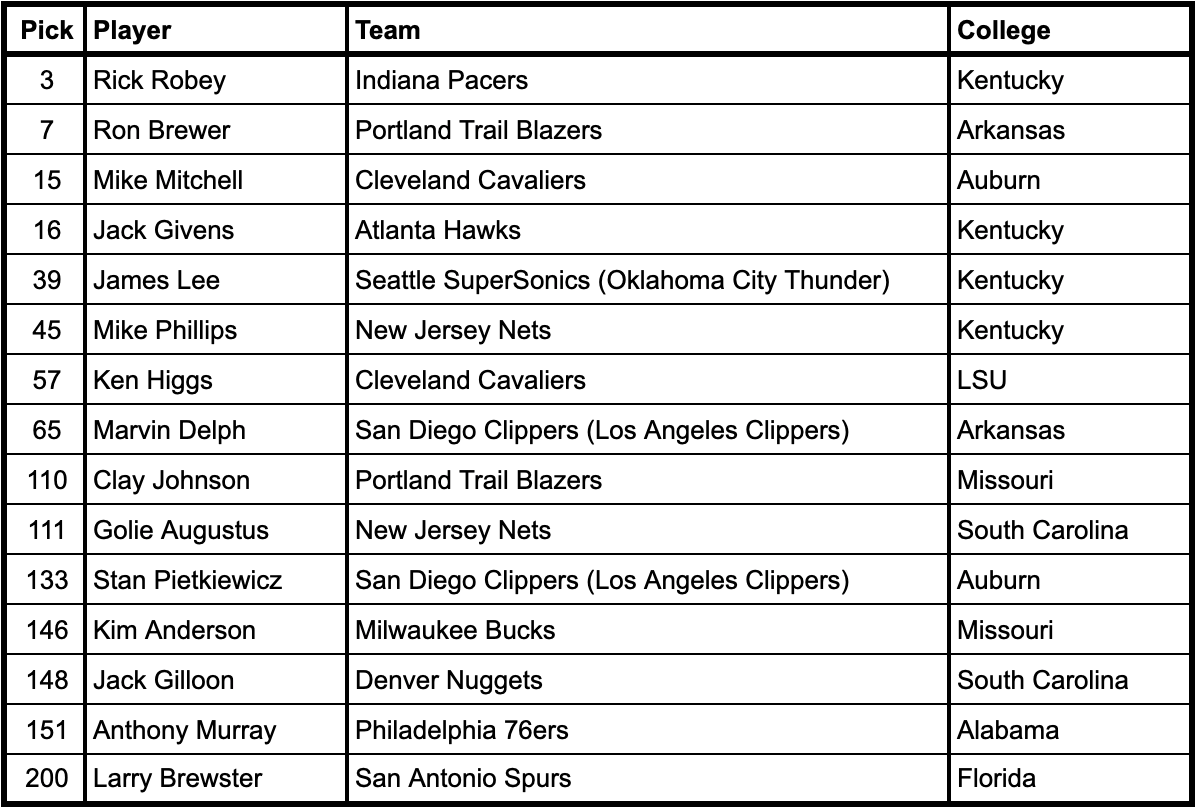 Kentucky had four different players drafted, led by Rick Robey going third overall to the Indiana Pacers, with all four of them being selected in the top-50 picks.

The 1979 NBA Draft once again had 202 total selections but only the first four rounds having all 22 picks in each round.

Hall of Famer Magic Johnson was taken number one overall by the Los Angeles Lakers. 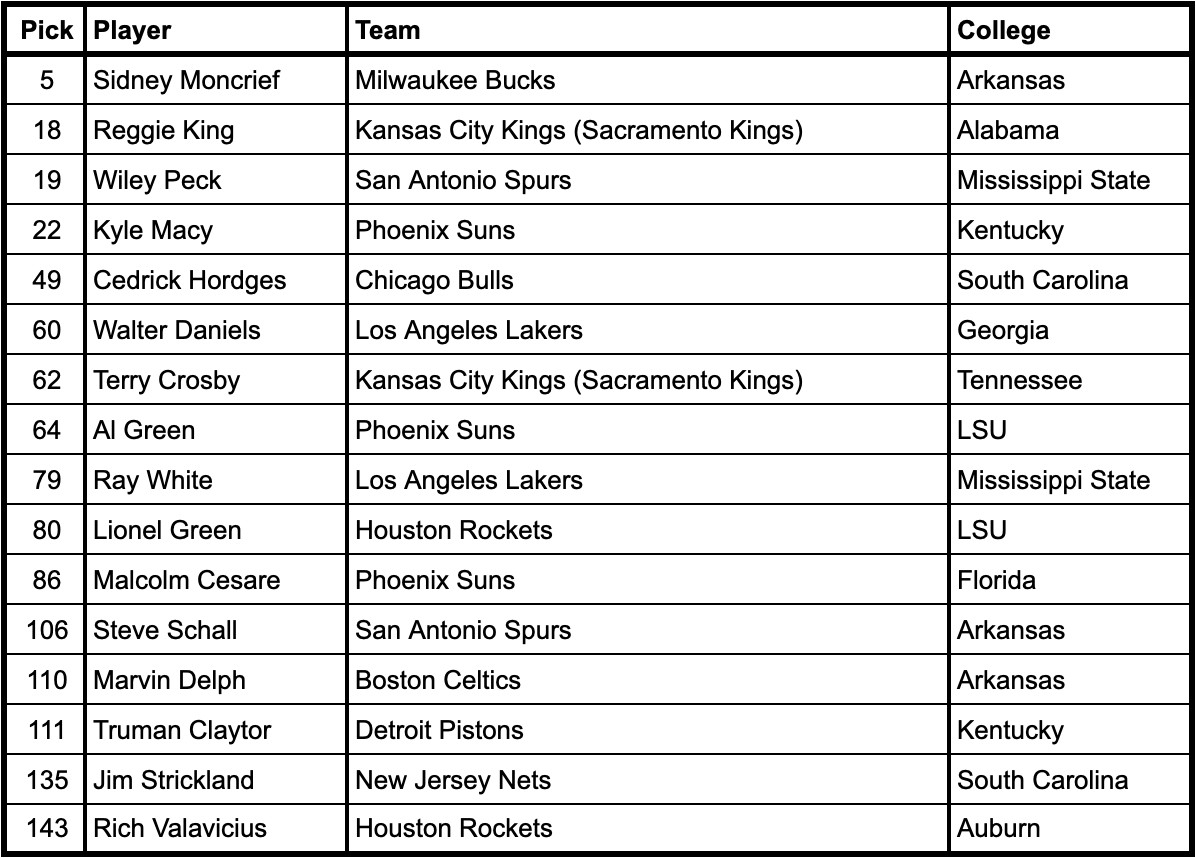 Arkansas improved on their seventh overall pick with another top-10 pick in this draft when Sidney Moncrief went fifth overall to the Milwaukee Bucks.

Ten different current SEC schools had at least one player taken in this draft with Arkansas, Mississippi State, Kentucky, South Carolina, and LSU all having two or more picks. 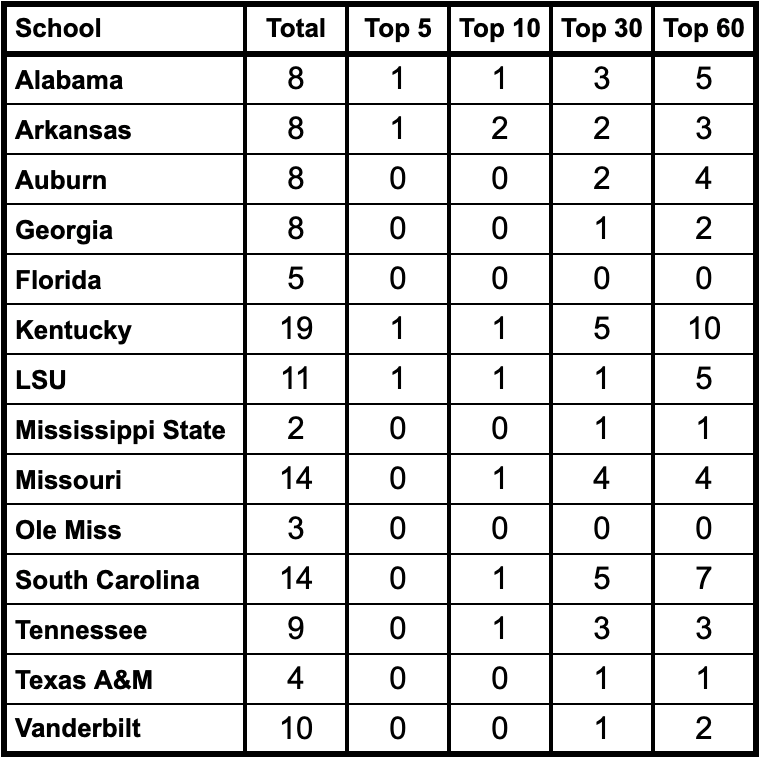 Kentucky had 19 players selected in the decade and then Missouri and South Carolina each had 14 players drafted.

There were four total top-5 picks with each selection coming from a different SEC school.

Arkansas had the most top-10 picks with two and Alabama, Kentucky, LSU, Missouri, South Carolina, and Tennessee each had one to give the current SEC schools a total of eight players taken in the top-10 throughout the 1970s NBA Drafts.