The 1950 NBA Draft consisted of 121 total picks with a single territorial pick to start it off, a first-round with 11 picks, eight more rounds with 12 picks, the tenth round with ten picks, and an 11th and 12th rounds with two picks and one pick respectively.

Yes, the draft formats for the early years didn’t make a ton of sense compared to the modern standard.

Art Burris out of Tennessee officially became the first SEC basketball player drafted into the NBA down at the 28th overall pick in the draft.

Overall, there were eight players taken from current SEC schools including three from Tennessee and two from Kentucky. Ed Montgomery from Tennessee was the very last pick in the very first NBA Draft.

The 1951 NBA Draft dropped back down to 87 total selections, but the format remained similar to the year before.

With the shorter draft, there were just six players selected from current SEC schools. Georgia, South Carolina, Mississippi State, Arkansas, Vanderbilt, and Texas A&M all had one player selected each.

The Tri-Cities Blackhawks (now Atlanta Hawks) favored SEC teams by selecting half of the SEC players taken in the draft that year.

The 1952 NBA Draft had 106 total selections but after the first territorial pick and the first round of just nine picks, each of the following nine following rounds had just one or two picks each and there was a large pool of players selected by teams picking all of their picks at once.

There were nine total players selected from current SEC schools with Joe Dean out of LSU being first at the fifth overall pick in the draft.

The 1953 NBA Draft had 122 total selections starting with two territorial picks, the first round of seven picks, 11 rounds of two or three picks, and then another large pool of extra picks at the end.

Kentucky had four different players selected with three of them going in the first 25 picks.

The 1954 NBA Draft had a nice and even 100 total selections. The draft started with a sensible order where the first eight rounds consisted of each of the nine teams selecting a player in each round.

At this point, there was not a snake order in the draft, so the Baltimore Bullets (now Washington Wizards) had the first pick in each round.

Despite there being 100 total players selected in the 1954 NBA Draft, there were just three players taken from the current SEC schools.

LSU’s Bob Petitt was selected with the second overall pick which would be the highest pick from an SEC school for the decade.

The SEC got a few more players selected in this draft with five total, but all of them were selected out of the top-25.

Tennessee, Kentucky, Ole Miss, LSU, and Missouri each had a player selected in the 1955 NBA Draft.

This was Ole Miss’s fist NBA Draft pick and through six NBA Drafts, only Auburn and Florida have not had a player selected.

The 1956 NBA Draft had 92 total selections with a territorial pick first, then the first round of seven picks followed by nine rounds with one pick each and the remaining players selected in a large pool of “other picks.”

There were seven total players selected from current SEC schools with Kentucky having three of those picks and Alabama having two.

The Minneapolis Lakers (now Los Angeles Lakers) used three of their 13 picks in the extra pool to select SEC players.

The 1957 NBA Draft had 85 total selections with the first six rounds consisting of one pick for each of the eight teams followed by final rounds where the teams picking dwindled round after round.

Despite teams picking once per round for the first several rounds, there was still no snake order to the draft so the Cincinnati Royals (now Sacramento Kings) picked first in each of the first twelve rounds.

There were five total players selected from current SEC schools with none getting selected in the top-30 picks.

The Boston Celtics selected three of the five players from the SEC taken in the 1957 NBA Draft including Joe Gibbon out of Ole Miss with the 69th overall pick (nice).

The 1958 NBA Draft had 88 total selections with the format being very similar to the previous year’s draft with the addition of a single territorial pick to start the selections.

Six players were selected from the current SEC schools with Florida having their first NBA Draft selection, Joe Hobbs, taken all the way down at the 64th pick.

With Florida finally having a draft selection, Auburn is the only SEC team without a player selected in the NBA Draft up through 1958.

The 1959 NBA Draft closed out the decade with 85 total selections and another format similar to the 1957 and 1958 drafts.

The SEC had four players selected to close out the decade with Johnny Cox getting drafted 30th overall out of Kentucky after being selected with the 28th pick the year before.

Mississippi State’s Bailey Howell was picked fourth overall, making him the third and final top-5 pick of the 1950s. 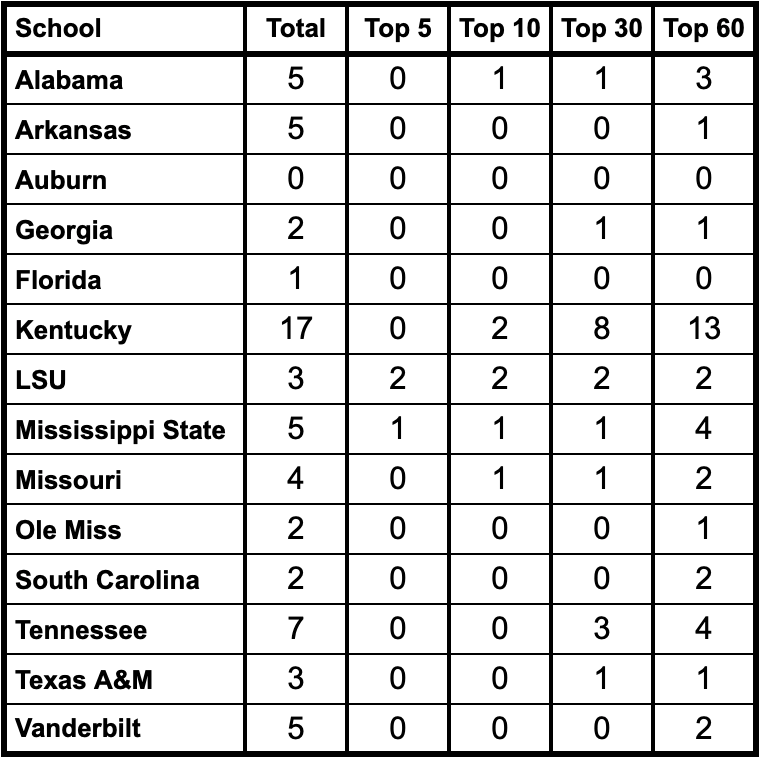 Despite having only three players taken during the 1950s, LSU had the most players picked in the top-5 with two.