The 2000 NBA Draft is known as one of the worst NBA Drafts overall and only produced a handful of successful players such as Hedo Turkoglu, Mike Miller, and Jamal Crawford.

Despite the draft not turning out to be a strong one in terms of NBA success, the SEC still had nine different players selected with two each from Florida and Auburn.

The Orlando Magic used both of their top ten picks on players from current SEC schools by selecting Mike Miller from Florida at fifth overall and Keyon Dooling tenth overall from Missouri.

The 2001 NBA Draft was headlined by Tyson Chandler and Pau Gasol getting selected with the second and third overall picks. There were also only 57 total selections because the Minnesota Timberwolves forfeited their first-round pick.

There were only three SEC players drafted, but Arkansas’s “Iso” Joe Johnson was drafted tenth overall by the Boston Celtics.

The 2002 NBA Draft also only had 57 total selections because of the Timberwolves forfeited pick in the first round.

The current SEC schools had five total selections in the draft, with three of them going in the first round.

The 2003 NBA Draft is also considered one of the best drafts of all time and still has several stars in the league such as LeBron James and Carmelo Anthony who are still in the playoff hunt.

The current SEC schools had six different players drafted, but just one of them was in the first round: tenth overall pick Jarvis Hayes out of Georgia.

The 2004 NBA Draft was the first since the league expanded to the current 30 teams and Dwight Howard was selected first overall by the Orlando Magic.

There were five players drafted from current SEC schools and none of them went in the first round.

Ole Miss had one of their rare NBA Draft picks with Justin Reed going 40th overall to the Boston Celtics.

The 2005 NBA Draft was the first with all 60 selections and included productive players like Chris Paul going fourth overall to the Hornets and Deron Williams going third overall to the Jazz.

The SEC had five players selected with three of them sneaking into the first round.

With the very last pick in the first round, the New York Knicks selected David Lee out of Florida and he ended up going on to one of the more productive careers for players taken in the 2005 NBA Draft.

The 2006 NBA Draft had LaMarcus Aldridge second overall but then also had some steals with Kyle Lowry 24th overall and Paul Millsap all the way down at 47th overall.

There were just four players drafted from current SEC schools in the 2006 NBA Draft.

LSU picked up another top-five pick when Tyrus Thomas was drafted fourth overall by the Portland Trail Blazers.

The eventual best player from the SEC in this draft ended up being Rajon Rondo out of Kentucky down at the 21st overall pick.

The 2007 NBA Draft featured the Portland Trail Blazers passing up on Kevin Durant, who ended up going second overall, to select Greg Oden from Ohio State.

The current SEC schools had a good draft with nine players taken overall including four in the top 11.

Florida set their record for most draft picks in a single draft with five different players selected including Al Horford, Corey Brewer, and Joakim Noah all going in the top ten.

Texas A&M also had their highest ever draft pick when Acie Law was selected 11th overall by the Atlanta Hawks.

There were seven players drafted from current SEC schools in the 2008 NBA Draft with two going in the first round.

All seven picks came from different schools with Kentucky having the last player taken when Joe Crawford was drafted by the Los Angeles Lakers with the 58th overall pick.

Texas A&M had the most productive NBA player in this draft in DeAndre Jordan, who was drafted with the 35th pick by the Los Angeles Clippers.

The 2009 NBA Draft included Blake Griffin as the number one pick and James Harden being taken third overall by the Oklahoma City Thunder.

The SEC closed out the decade with six players selected where once again they all came from different schools.

Just one of the players, DeMarre Carroll out of Missouri, was taken in the first round. 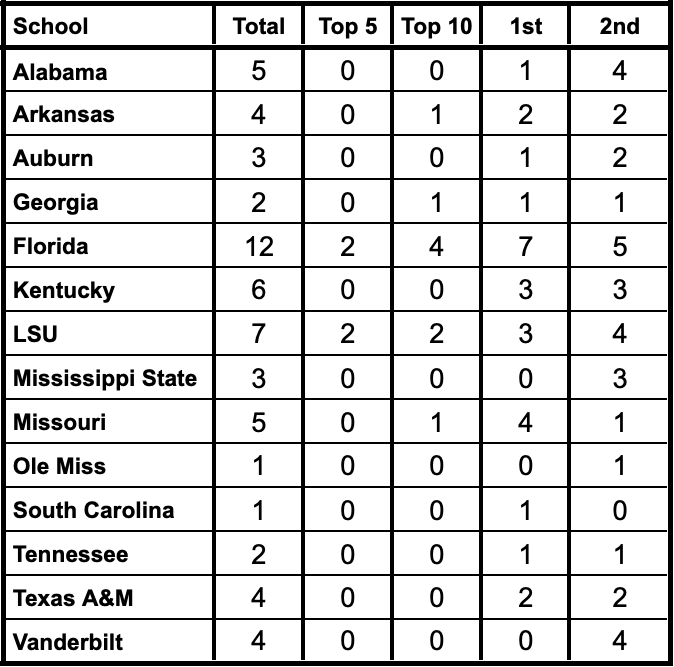 LSU and Florida were also the only teams that had top five picks this decade, with each having two.

Florida had over half of their league-leading 12 picks go in the first round and four of them went in the top ten.