Florida didn’t get off to a great start in the 2019-2020 season and while they started to figure out things towards the end of the season, they never really met their lofty preseason expectations. This year, the Gators aren’t garnering the same national praise to start the year, and that might be what Mike White and his squad need.

While they may not be considered one of the best teams in the nation going into the 2020-2021 season, the Gators still return key players from last season and will once again have the talent to contend near the top of the SEC.

I have Keyontae Johnson as my preseason Player of the Year in the SEC because he was the leading returner in several key statistical metrics as well as having a better opportunity to shine on this Florida roster. There are other talented players around Keyontae Johnson, but I think his ability to expand on last year’s success will drive how far Florida can go. If he can have an SEC Player of the Year season, the Gators will be in contention for the league title.

Florida knew that they would only have Kerry Blackshear Jr for one year a grad transfer, but the loss of Andrew Nembhard was a big blow to the Gators ceiling going into this season. Even without Nembhard, the return of Keyontae Johnson, Noah Locke, and Scottie Lewis is a good sign for Mike White.

The returning talent will be needed a little more for Florida because most of the young newcomers seem to be more of project prospects that might take a year or two to develop to the talent level that the Gators are used to. 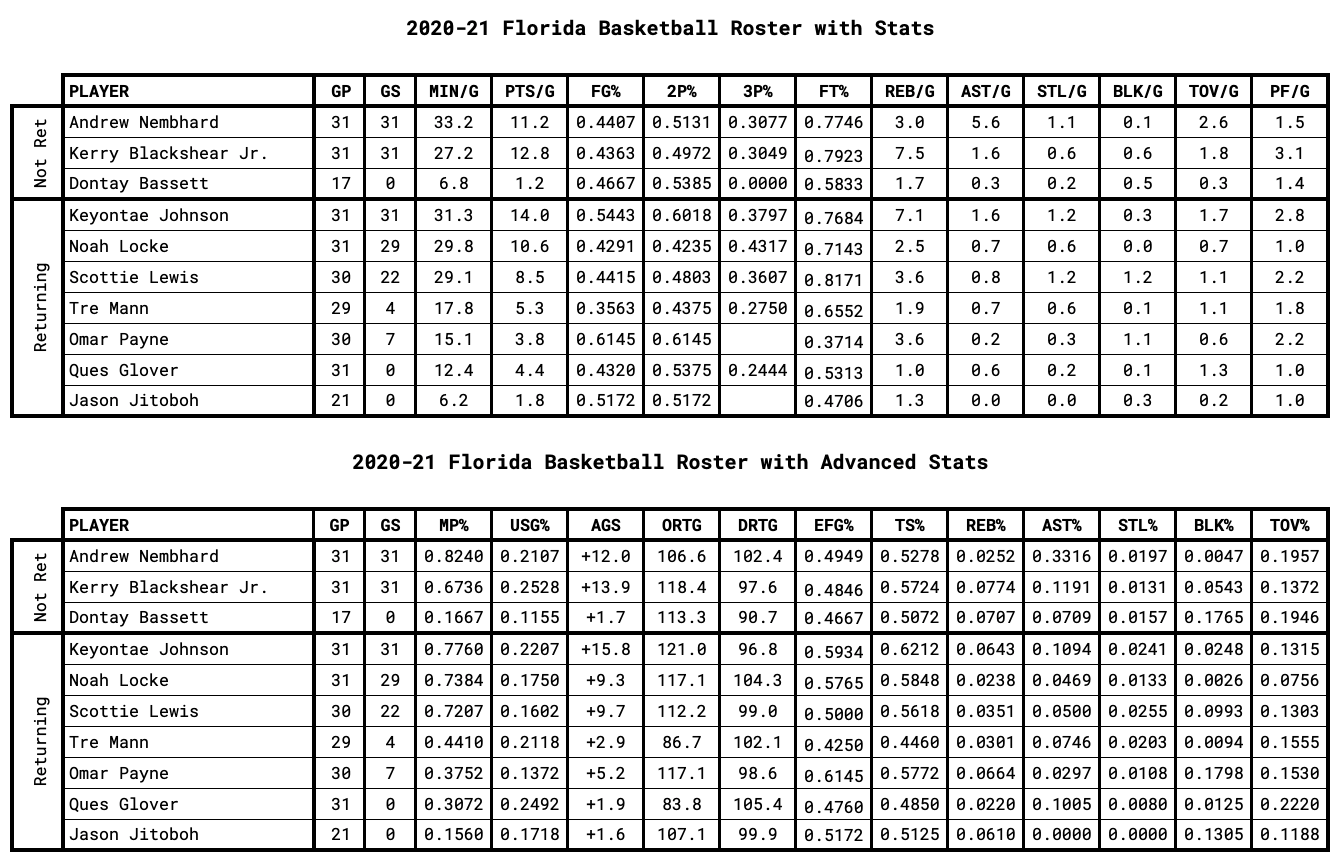 Speaking of newcomers, the Gators have a good mix of transfers, high school prospects, and even a top-10 junior college guy. Michigan Transfer Colin Castleton was granted immediate eligibility, so Florida will have another key player to help add talent and depth to their front-court. 4-star, top-50 prospect Samson Ruzhentsev could be a key piece, but because the Gators also have added depth with Castleton and Anthony Duruji, he should have time to develop into the system and isn’t going to be rushed to produce early.

The three returning starters all hold onto their starting spots and then the final two spots left by Nembhard and Blackshear should be filled with Tre Mann and Omar Payne, who also have a little bit of starting experience from last season. This should allow key additions like Castleton, Ruzhentsev, Appleby, and Duruji to help out more as role players while Ques Glover and Jason Jitobah have another year to expand their roles. 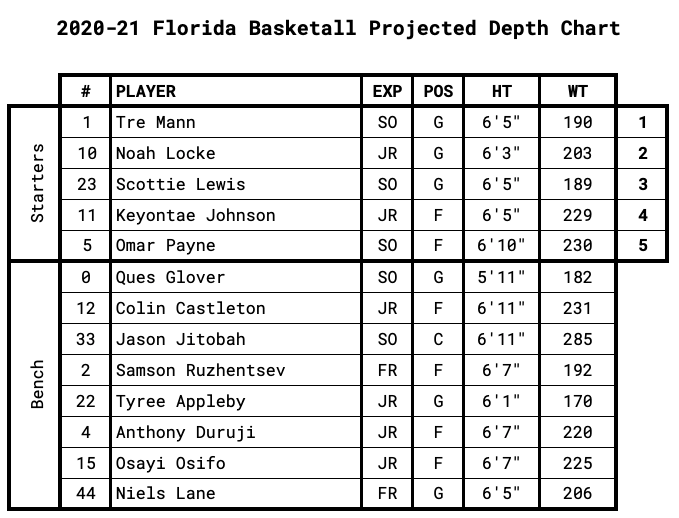 Florida won’t have much time to get accustomed to a new year of college basketball as they have major games against Virginia, Oklahoma, and Florida State all within the first month and all three are away from home. I have the Gators losing each of those, but if they can win one of those or at least all of their other non-conference games, they should set themselves up well enough where a nice run in the SEC can secure them a tournament spot.

In SEC play, I have the Gators as one of the second-tier teams and I think their schedule will play out where they find themselves tied with Alabama and South Carolina in the final standings but the tiebreaker will benefit them the most. Florida is fortunate to have Kentucky only at home, but they also have to travel to West Virginia in the middle of league play for the SEC/Big 12 Challenge.

I’m hesitant to put a lot of faith in Mike White’s team again this year, but I think they’ll start clicking once they get to SEC play again and the talent should be enough to handle games they should win and pull off enough wins against better competition.

EDIT: Florida had a COVID instance reported on 11/22 and will not travel to Mohegan Sun to face UMass Lowell and Virginia as previously scheduled. The updated schedule and predictions are below. 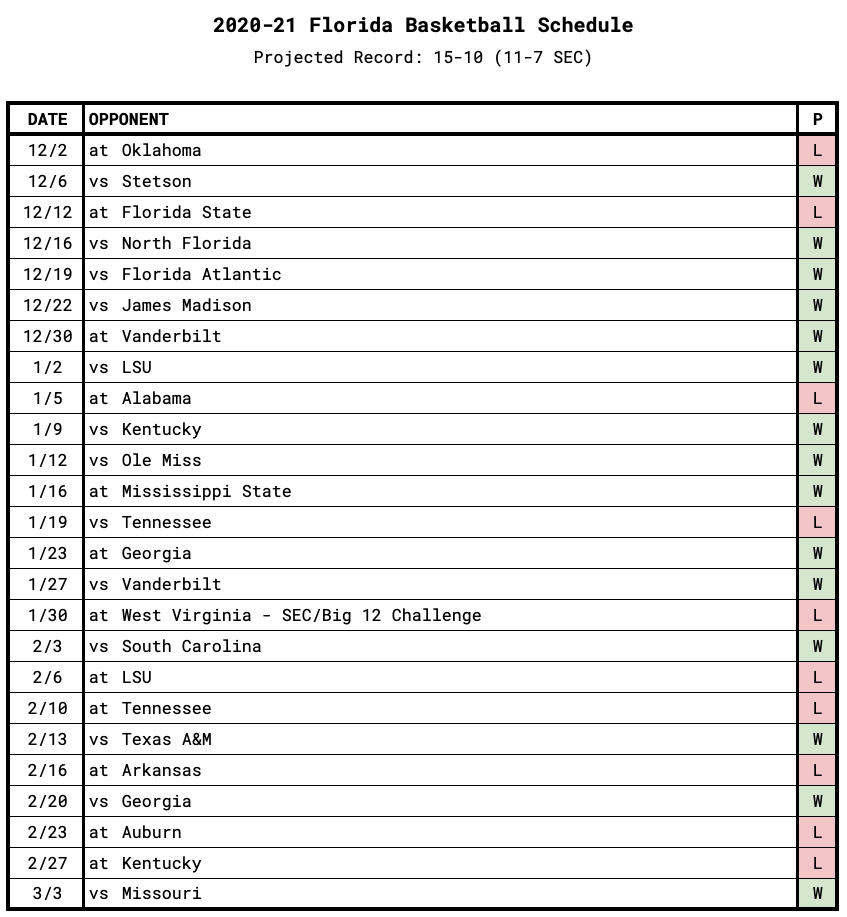