Alabama is entering year two under Nate Oats, and after instilling an exciting, fast-paced offense last year and an impressive result on the recruiting trail, the Crimson Tide are garnering plenty of preseason expectations. While I have more faith in Oats than I did in Avery Johnson, mostly because his style of play is a little bit easier to succeed with in college, he is only entering year two, so I’m still a little too skeptical to assure that they’ll be a top team in the SEC.

However, Nate Oats has all of the talent needed to be successful in year two after signing four 4-star recruits to join four high quality returning players. I have both John Petty Jr. and Jaden Shackelford on my preseason All-SEC First Team as well as Herb Jones on the All-SEC Defensive Team.

My biggest concern for Alabama is their ability to replace Kira Lewis Jr. who left early after his sophomore year to declare for the NBA Draft, where he is expected to be a first-round pick. The expectation is that Jahvon Quinerly and Josh Primo can step up to replace all that Lewis brought to the table, but replacing a point guard might be one of the hardest spots on the court to turnover.

The Crimson Tide are losing six different players from last year’s team, but the four players that are returning have 99 combined starts between themselves and all shot over 39% from the field. 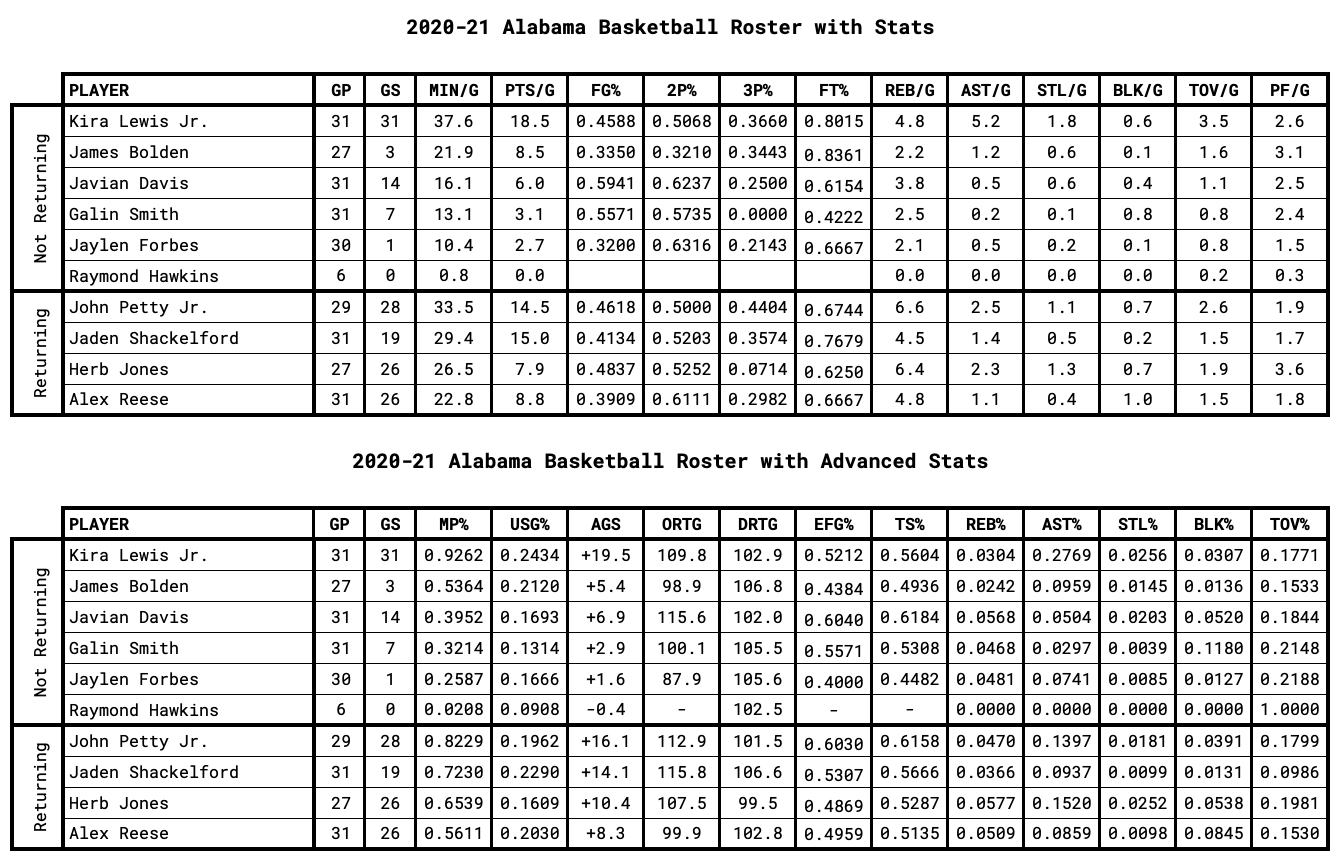 In addition to the four returning players, Alabama will have nine newcomers on the roster. James Rojas and Juwan Gary will be available after missing all of last season due to injuries. Quinerly, mentioned above, is eligible to play after transferring from Villanova before last season and Jordan Bruner is immediately eligible after grad transferring from Yale.

The Crimson Tide landed the 12th-best recruiting class in the nation and 6th best in the SEC which includes two top-60 prospects and four 4-stars overall.

I think that all four returning players will find a spot in the starting lineup with Jahvon Quinerly initially taking over for Kira Lewis Jr. at the point guard spot. Alex Tchikou going down in preseason practice with a season-ending injury might end up hurting the Crimson Tide’s depth quite a bit, but they still have James Rojas and Juwan Gary back from injury to help anchor the front-court this season.

Josh Primo has the talent to challenge Quinerly for the starting spot and I think that competition will keep both players at their best as they try to earn more minutes in the up-tempo Nate Oats offense. 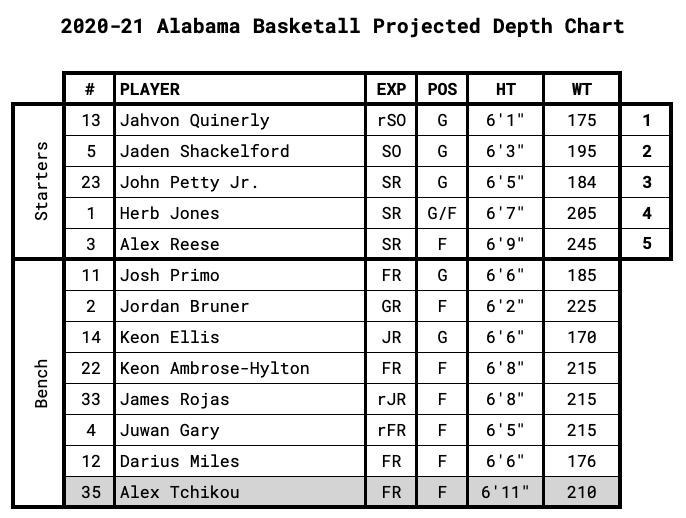 Alabama, like a lot of SEC teams, will have no true road games in their abbreviated non-conference slate aside from traveling to Oklahoma for the SEC/Big 12 Challenge in January. They still have key neutral matchups in the Maui Invitational (now being held in Asheville) and the Holiday Hoopsgiving event in Atlanta where they can hopefully get some preparation for the NCAA Tournament at the end of the year.

In Asheville, I have the Crimson Tide going 2-1 if they lose their first game, but could also go 1-2 if they manage to make it to the top half of the bracket and face a team like UNC. Facing Clemson in Atlanta will be a nice challenge and I think AAC front-runner, Houston, will give them a lot of trouble in a likely diminished crowd at home.

When Alabama gets to conference play, I have them finishing 11-7 and in a four-way tie for 4th with Florida, Ole Miss, and South Carolina, where my projected tie breakers would give them the 5th seed going into the SEC Tournament. I have Alabama as one of the five SEC teams that I think will safely make the NCAA Tournament at the end of the year. 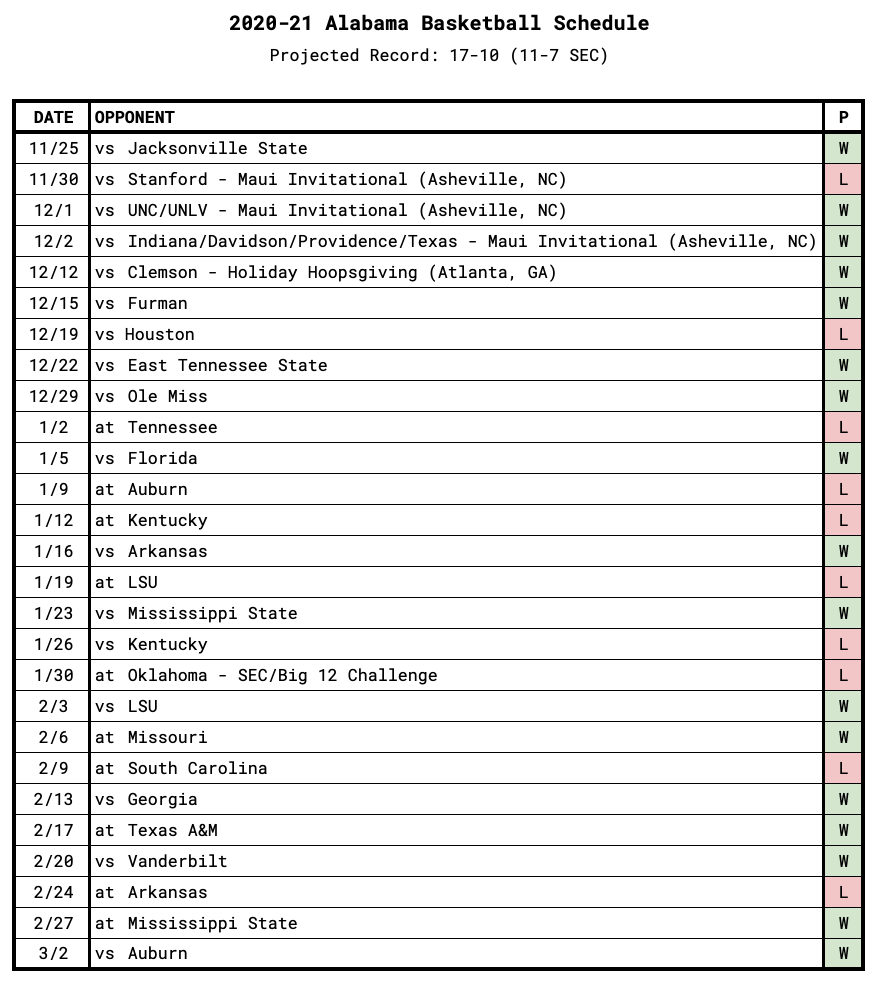