With almost every major player returning for the Tigers, Cuonzo Martin’s team has as good a shot at taking the next step and being competitive in the SEC once again. Last season saw Missouri deal with various injuries throughout the year, which ultimately allowed nine different players to get starting experience with eight of those starting at least ten games. All but one of those nine players are back for another year, and that’s what makes Missouri a very serious contender to be a major sleeper and shock some people this season.

I believe Missouri was supposed to be an addition to the SEC that made the conference better in basketball, and since the Tigers joined, the conference has gotten better without them. Missouri being competitive again will allow the conference to bring in another passionate basketball fanbase and continue the progression towards being seen as more than just a football conference.

Cuonzo Martin hasn’t had a winning record since his first season in Columbia. If he can’t manage to pull it off this year, I’m not sure when it will happen again.

The Tigers are returning three different players that averaged over ten points per game last season as well as their leading rebounder. Dru Smith, who was the only player to start in every game last season, boasted the best overall stats by averaging 12.7 points, 4.2 rebounds, and the SEC’s tenth best 3.9 assists per game.

Dru Smith’s +15.7 Adjusted Game Score is also the third-best amongst returning players and puts him right below SEC Player of the Year candidates John Fulkerson and Keyontae Johnson.

Mark Smith also returns as one of the best three-point shooters in the conference and will look to further improve on his 37% from behind the arc.

There isn’t much to talk about here since Missouri is returning almost everyone from last season. The only newcomers for this season are a grad transfer from Hawaii, Drew Buggs, a junior college transfer, Ed Chang, and a 7’3”, 3-star high schooler. All will likely be depth pieces, but it can’t hurt to have more experience and a massive presence in the paint.

With so many players who have starting experience returning, this competition might be one of the best in the SEC, but barring any injuries this season I think the main starting five is going to mostly stay consistent this season. All three of the Smiths are joined by Jeremiah Tilmon and Xavier Pinson.

Along with being one of the most experienced teams, Missouri will also be one of the biggest with no players being listed under 6’2” and just two players weighing less than 200 pounds. 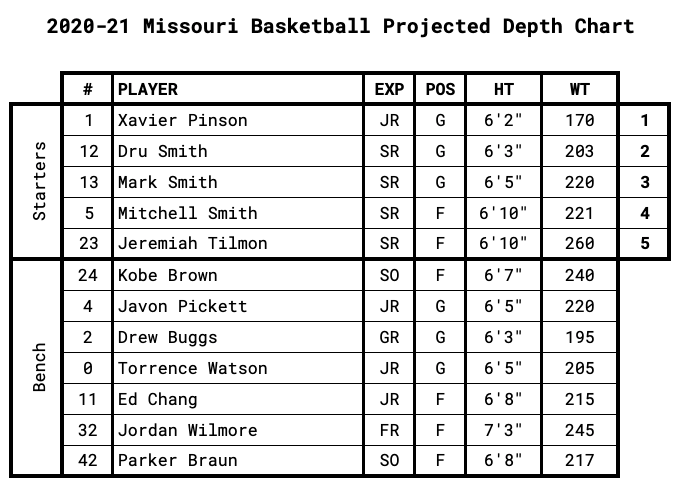 Whether it was their plan or not, it doesn’t look like Missouri managed to finish filling out their schedule or more matchups could fall into place after the season starts. The Tigers will open the season tomorrow at home against Oral Roberts and could start the season on a nice little winning streak if my predictions are accurate.

In each of the first few games of the season, I’m giving Missouri a little bit more of an advantage because of how much experience they return. I think the fact that this entire team has already played with each other will be extra valuable early on as other teams are still getting situated after a weird offseason with limited practice time because of COVID-19 and frequent shutdowns.

Missouri won a coin toss in order to host Illinois in one of the better college basketball rivalries. Illinois looks to be one of the top teams in the country, so that game a few weeks into the season will be a major indicator of how good Missouri can actually be this season. I don’t think the experience and home advantage will be enough for the Tigers, but if they can keep it competitive or shock everyone, they’ll find themselves on way more people’s radar.

By the time the Tigers get to SEC play, I’m not sure the advantage of having everyone back will be as great as it is in non-conference play. Yes, there were plenty of injuries, but this team still only finished tenth in the league last season and it’s not like the rest of the SEC isn’t also continuing to get better. I certainly won’t be shocked if Missouri is the sleeper in the SEC, but at the moment, there are just too many other talented teams for me to comfortably pick Missouri in enough games that puts them in the top half of the league. 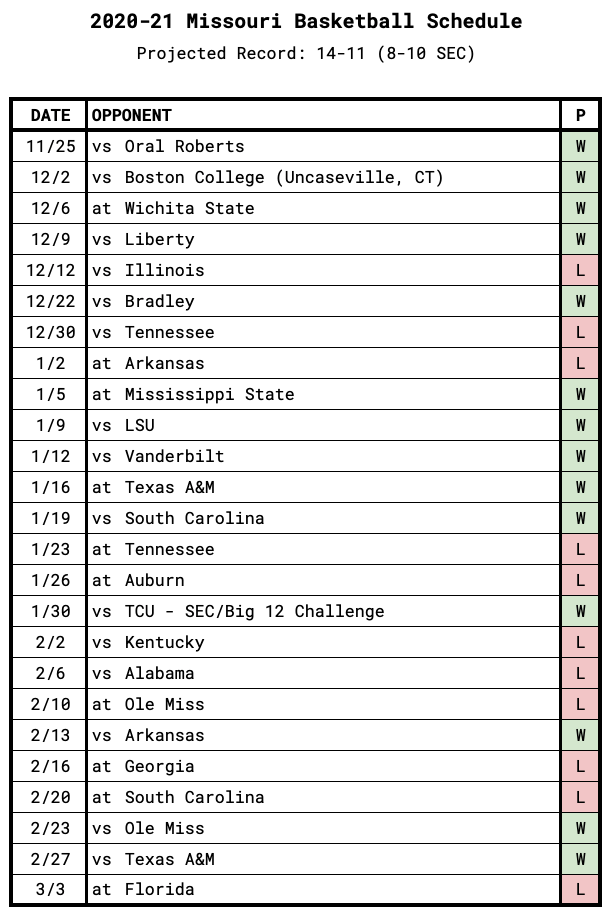