There is speculation about how he was able to do it, but there is no denying that Will Wade has turned LSU into an SEC power in just his first few seasons on the job. With 28 SEC regular-season wins over the last two seasons and already a regular-season title, Will Wade just keeps reloading. While the Tigers struggled down the stretch in SEC play last season, they return key players and have one of the nation’s top recruiting classes which should put them in a position to push for another conference title.

I have LSU as one of the more talented teams in the SEC this season, right below Tennessee and Kentucky, and I think what Will Wade has already proven makes me a little more confident in them, compared to teams like Alabama and Florida who have just as much talent. Assuming the NCAA doesn’t finally choose to do something about all the things LSU has been investigated for, this will likely be another season where the Tigers have lofty expectations.

The best part for fans of LSU basketball is that this team should be one of the more talented teams with plenty of experience, but they still only have one senior. Trendon Watford opted to withdraw from the NBA Draft last season, and it’s not likely he’ll do so again, but his return gives LSU a true SEC Player of the Year candidate that should help lead other key players in pursuit of another SEC regular-season title.

LSU did see leading scorer Skylar Mays get drafted in the 2020 NBA Draft, and they also lose third-leading scorer Emmitt Williams, but Javonte Smart, Trendon Watford, and Darius Days all return and are poised to take another step forward.

Watford was third in the league in rebounds during SEC play last year and is the leading returning rebounder both for SEC play and the full season. Watford also averaged over 13 points per game last season, so if both numbers go up, even just slightly, he’ll be a threat to average a double-double and will be one of the favorites to win the SEC Player of the Year Award when it’s all said and done.

In addition to Darius Days and Javonte Smart also returning, a guy that I have my eye on is Charles Manning Jr. who could be a valuable shooter from outside to balance a team that is very talented in the frontcourt. Manning Jr. shot over 40% from three last year on just 32 attempts, but if he can keep that percentage, or improve it while getting more opportunities in the offense, it can give LSU the outside threat to replace Skylar Mays. 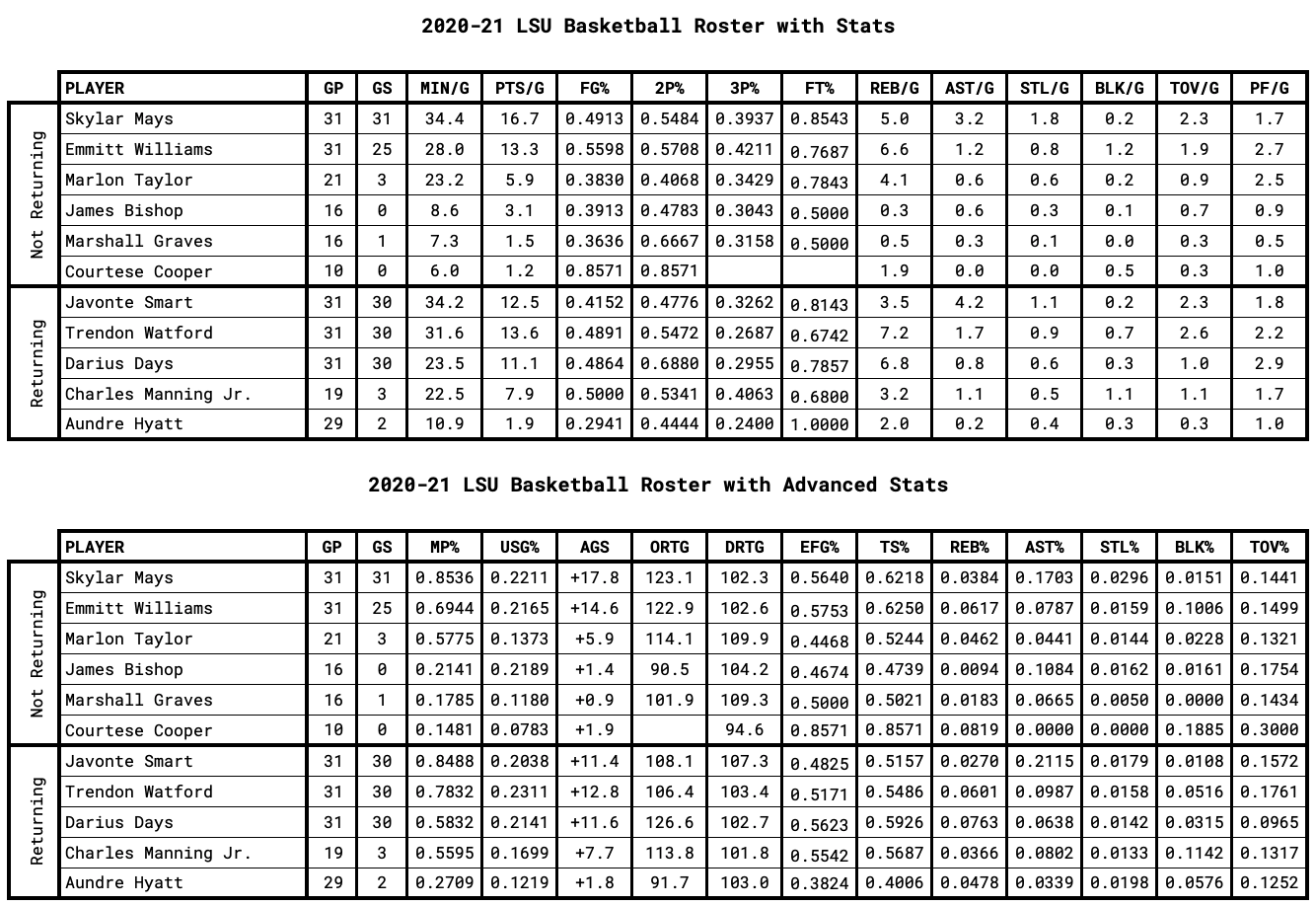 The Tigers only have to replace two starters from last season, but because several other role players graduated or decided to transfer, LSU also had room to bring in key transfers and sign the sixth-best recruiting class in the country.

Because of the pandemic increasing the likelihood of the NCAA approving waivers, LSU will now have even more depth in their frontcourt with the immediate eligibility of Shareef O’Neal and Bryan Penn-Johnson who transferred from UCLA and Washington, respectively.

Joining the transfers top-100 players Cameron Thomas, Mwani Wilkinson, and Eric Gaines along with 3-stars Jalen Cook and Josh Gray. Also eligible this season is Parker Edwards, who transferred to LSU last season after scoring 25 points against them in a short stretch while playing for Southeastern Louisiana.

The three returning starters, Javonte Smart, Darius Days, and Trendon Watford will all retain their spots in the starting lineup and then I think they’ll be joined by Charles Manning Jr. (mostly because of his shooting ability that I mentioned above) and Cameron Thomas who will also be a major scoring threat in the backcourt as a freshman.

Aundre Hyatt, who played in all but two games last season, will join two transfers and two top-100 freshmen in the main bench rotation for the Tigers. Then Parker Edwards, Josh Gray, and Jalen Cook will provide depth that could be even more important this season. Because Watford and Days will make up a starting frontcourt that is on the smaller size, bigger guys like O’Neal, Penn-Johnson, and even Josh Gray could be used more in certain games and matchups so that bigger teams aren’t able to take advantage of LSU at all. 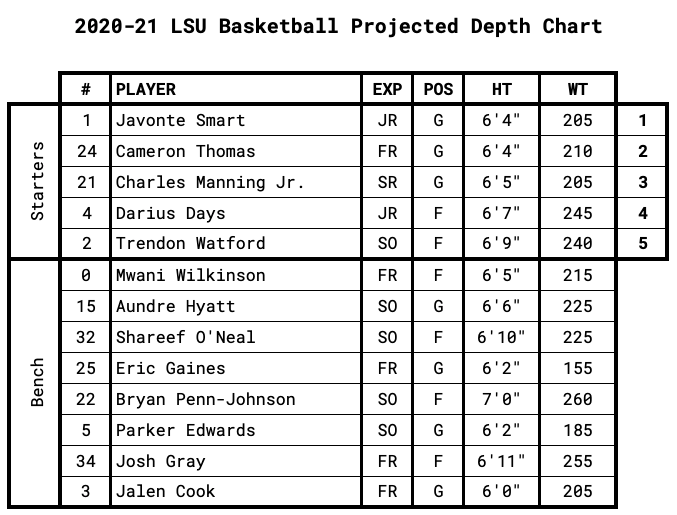 In the main part of non-conference play, LSU has one of the easier scheduls compared to most other SEC teams. They’ll at least start their season in Missouri with a neutral game against SIU Edwardsville and a road matchup against Saint Louis. If LSU is going to lose a game before SEC play starts, the road game against Saint Louis will be the most likely with South Florida and VCU also having a shot to throw off the Tigers.

Almost immediately into SEC play, we’ll get a good opportunity to see where both LSU and Florida stand when the Tigers travel to Gainesville. I give Florida the edge at home, and then the same for Missouri a week later, but otherwise LSU could start SEC play on a big winning streak like last season. The middle stretch of the schedule could be pivotal for the Tigers since they’ll have a home game against Alabama and Texas Tech, then road games against Kentucky, Texas A&M, and Alabama all within about two weeks.

The backstretch of the conference schedule should be a little easier with two of LSU’s road games coming against Mississippi State and Georgia, but the Tigers will still have tough home games against Florida, Tennessee, and Auburn. LSU is fortunate to only have to play Tennessee and Kentucky once each, and the Tennessee game is in Baton Rouge, which is why I think the Tigers have a slight advantage to finish just above the other large group of teams in the middle tier trying to finish in the top half of the league.

When it’s all said and done, I have LSU alone in third place in the SEC, but like so many others, one or two more losses could make them fall quite a bit in the standings. Again assuming that Will Wade coaches the entire year (and even if he doesn’t, but all the players remain eligible), LSU has a ton of talent this season and should be right below Tennessee and Kentucky all year with a shot to be in contention down the stretch, which is all that the Tigers could need. 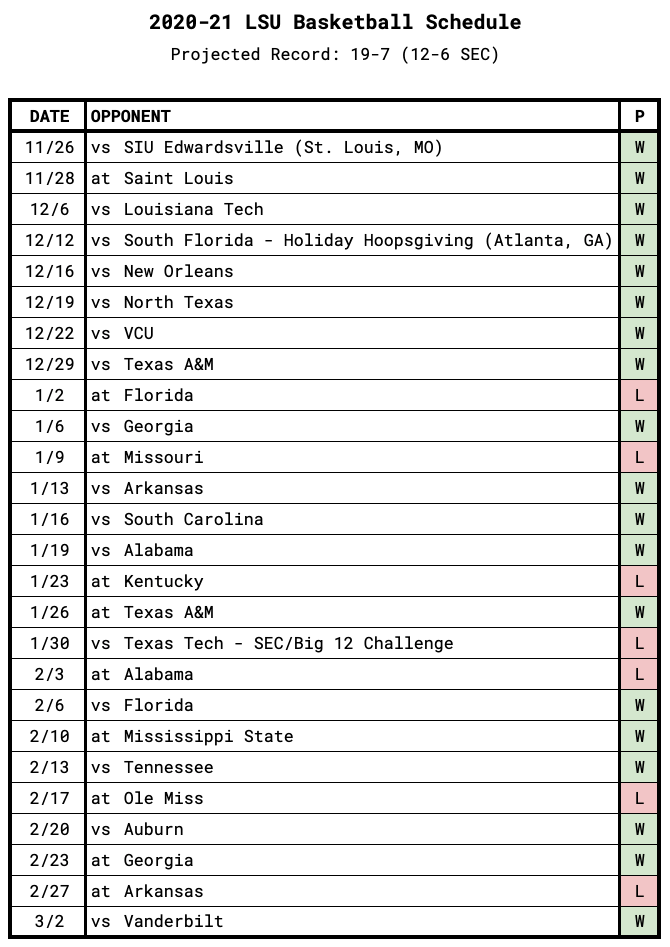