For each of the last few years, Auburn has been underrated going into the season, and it’s hard to doubt Bruce Pearl and his squad at this point. However, it is undeniable that this will be the youngest team in recent memory and while it still has a high ceiling, getting young guys to all play to their full potential is a bigger challenge than getting experienced players to play better than others expected them to. Last season, Auburn won a lot of games with clutch moments late in games and made a lot of comebacks based on insane runs. I’m not saying that all the young talent can’t do that, but early in the year, I don’t expect Auburn to wind up on the winning side of every game.

Last season Bruce Pearl had a case for coach of the year, and if the award was given out at the end of the postseason, he probably should have won it in 2019 as well. But if Pearl can manage to turn this young team into a contender in the SEC, and not just finish in the top half like I expect them to, then he deserves the award, finally. All eyes and expectations should be on the 2021-2022 team at this point, but Pearl has shown that overlooking Auburn might be a mistake and I don’t think he or the team are looking for a “rebuilding year” even if Auburn fans should still set that as their expectation (I know they won’t).

An extremely young team is already a difficult challenge, but add in COVID-19 and a shortened offseason and this team will likely take even longer to start playing up to their full potential. Like previous years, I don’t think many teams will want to play Auburn later in the season, but the trick will be the Tigers figuring things out early enough that they can be playing for something meaningful down the stretch.

Auburn is replacing all five starters from last season which includes all their top scorers and over 65 points per game. I can keep harping on how young and inexperienced Auburn will be, but I think the little bit of playtime that some guys got last season will also be a major key in this squad figuring things out a little earlier.

Sure, all the starters are gone, but Auburn still returns Allen Flanigan, Devan Cambridge, and Jamal Johnson who each played in every single game last season along with Jaylin Williams who started to work his way into the rotation and show his true potential right before the season was canceled. While Cambridge and Williams had some very impressive spurts, the key for Auburn this season will be if they can continue that level of play for a sustained portion of games. A 25 point game from Cambridge is great and certainly valuable, but I think the key for Auburn will be how many he averages, instead of just one or two big games.

Tyrell Jones, Jamal Johnson, and Babatunde “Stretch” Akingbola will all also have to take major steps this year because Auburn can’t afford to have them play minor roles. Johnson and Jones could each find themselves starting in the backcourt and Akingbola will be tasked with starting or at least playing heavy minutes at the five, alongside Cardwell. 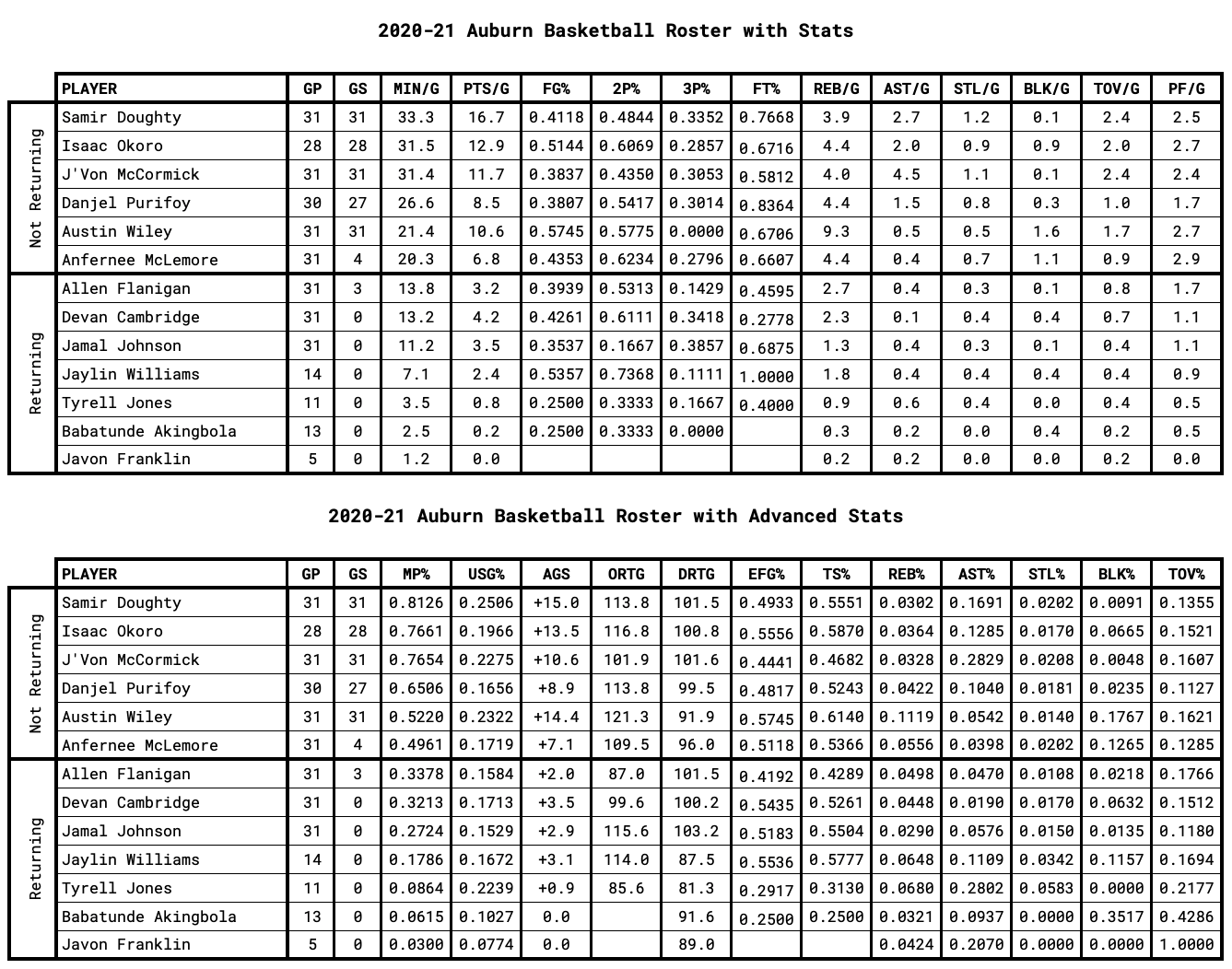 Even though the title has already been surpassed, Sharife Cooper will still come into the season as the highest-rated prospect to play for Auburn. He’s the face of another impressive recruiting class for Bruce Pearl that also includes highly ranked 4-star JT Thor and three 3-stars that all have a ton of potential to play key roles and might prove their rankings wrong.

Cardwell and Thor will most likely join Cooper in immediately vying for starting spots and certainly playing major roles while bolstering Auburn’s frontcourt depth. Powell could provide plenty of shooting ability and might even help take some of the pressure at the point guard spot if Jones ends up being more of a two-guard this season. Lastly, Chris Moore might not have an immediate role, but he can contribute in so many ways that I think it will be hard for him to stay off the court as the season progresses.

I made my starting five predictions awhile ago and I’m sticking with it. I think Cooper and Williams are locked to start at their positions and then the other three are more likely to start at the beginning of the year but could see others step in or take more of their minutes as the season goes on. What Auburn loses in experience from previous teams, they certainly make up for with depth this year. There are probably nine guys on the roster that will not only play but could contend for starting spots throughout the year.

Also, after years of undersized guards, Auburn has a roster with no one listed under 6’1” (although Sharife Cooper and Tyrell Jones still aren’t “large” guards). In a year where COVID-19 could potentially sideline guys more frequently, Auburn should be fortunate to have such depth. And at the very least, they’ll have guys that are all capable of learning the system and having their opportunity to “audition” for roles in a 2021-2022 team which should have plenty of hype. 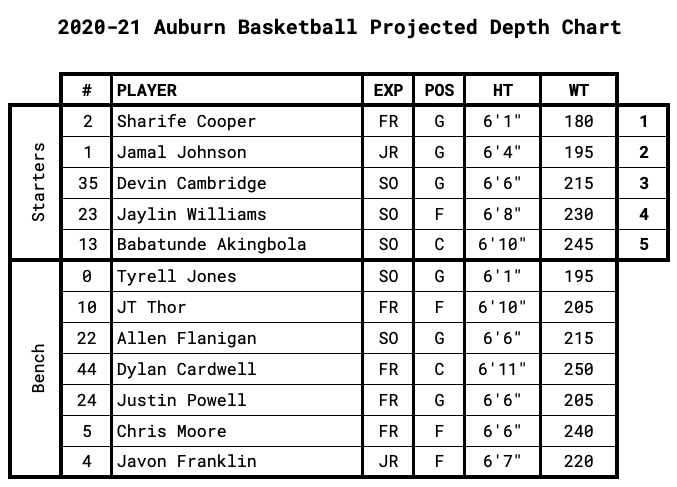 Bruce Pearl didn’t allow having a young roster to be an excuse for scheduling weak, even in a pandemic. Auburn will face the almost consensus top two teams in Gonzaga and Baylor, and both will be away from home. The Tigers also have a tough matchup with Memphis in Atlanta for the Holiday Hoopsgiving event. I see a lot of Auburn’s losses coming in the early part of SEC play because the team will be figuring things out, but I also don’t fully expect them to get through the rest of their non-conference schedule unscathed, although it’s hard to point to another game that I think they’ll have a good shot of actually losing.

Then, when they do make it to SEC play they almost immediately get a tough road trip to College Station and Oxford where I think the loss at A&M, in particular, is a game that the Tigers wouldn’t lose if it was played later in the season and could be key in them finishing in the top half of the league.

The sky is blue and Alabama has another talented team on paper, so I once again see these two rivals splitting the series with both teams winning at home like they usually do. A road game at Georgia is a slight chance for Auburn to get a win against a less talented team, but then it’s right back to the gauntlet with the first matchup against Kentucky and then Arkansas and South Carolina on the road.

I mentioned Baylor above, but going to Waco in the middle of the season can be the ultimate deciding point in Auburn’s season. While I think it’s still a very likely loss, how Auburn responds could decide the success of the season overall. At this point in the year, the team should be coming together and getting ready for another late surge, but the lack of experience and leadership could lead to a young team cracking and finishing on a worse note.

I think Pearl will have the team focused when they get to the last stretch after the SEC/Big 12 Challenge and Auburn should be able to get rolling with wins over Georgia, Ole Miss, and Vanderbilt before running into Rupp Arena, where Auburn hasn’t won since 1988. A road game at LSU will be equally difficult, but Auburn will need to take advantage of playing both Florida and Tennessee at home if they want to stay in the top half of the league or higher.

Tennessee is still my early favorite as the best team in the SEC, but Auburn and Bruce Pearl have had their number, so I think at that point in the season and maybe an expanded crowd in Auburn Arena, the young Tigers can pull it off again. A final regular-season game against Alabama will likely mean a lot for both teams, rivalry aside, but I think Alabama will be too talented, even if Auburn is reaching their peak at that time.

Overall, I have Auburn finishing with the ninth seed in the SEC Tournament, but they’re also a game away from fourth in my predicted scenario for all teams in the league. No matter where they finish in the SEC, the non-conference schedule that Auburn has should put them in a position to be on the bubble if they can get double-digit wins in SEC play. 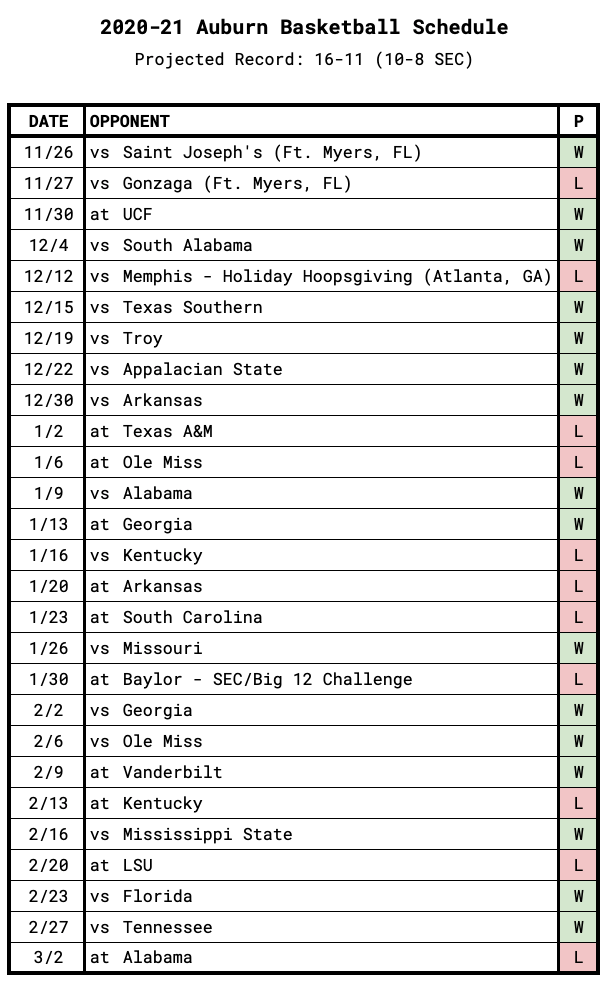