It feels bad to pick Vanderbilt at the bottom of the league, once again, but with the SEC acquiring a surge of talent each of the last few years, the Commodores find themselves still in a transition as Jerry Stackhouse enters year two. Key pieces are returning like Scottie Pippen Jr. and Maxwell Evans, but unless one of them or someone else has an Aaron Nesmith like breakout season (and stays healthy) it’s hard to see Vanderbilt climbing too far out of the cellar this season.

The Commodores will most likely look better, and may actually be better, but so is the rest of the league around them. Similar to Texas A&M, Vanderbilt just doesn’t have enough to get into the next tier and compete with the large group of teams in the “middle of the pack” in the SEC. I think Stackhouse can work at Vanderbilt, but he’ll need much more patience than Bryce Drew received while he was in Nashville, and the injury bug has to leave the Commodores alone for at least a few years.

Every time I look at the stats that Aaron Nesmith put up in the first half of last season, it is even worse to know we missed out on a potential Player of the Year caliber season for Vanderbilt, and probably a few more wins. Although the injury set Vanderbilt back last season, it did provide more minutes and opportunities for young guys like Scottie Pippen Jr. and Dylan Disu. If those two can provide even more this upcoming season, after having a full year of starts already under their belt, the Commodores just might be able to pull off a few wins in the SEC.

The Dores will also have plenty of experience with Maxwell Evans and Ejike Obinna back for their senior season and Clevon Brown being granted another season of eligibility after going down with an injury early last season. Brown was on pace to be one of the better players statistically before the injury, so if he can stay healthy and keep up those stats against better competition, it’ll be yet another key for Vanderbilt getting out of the cellar. 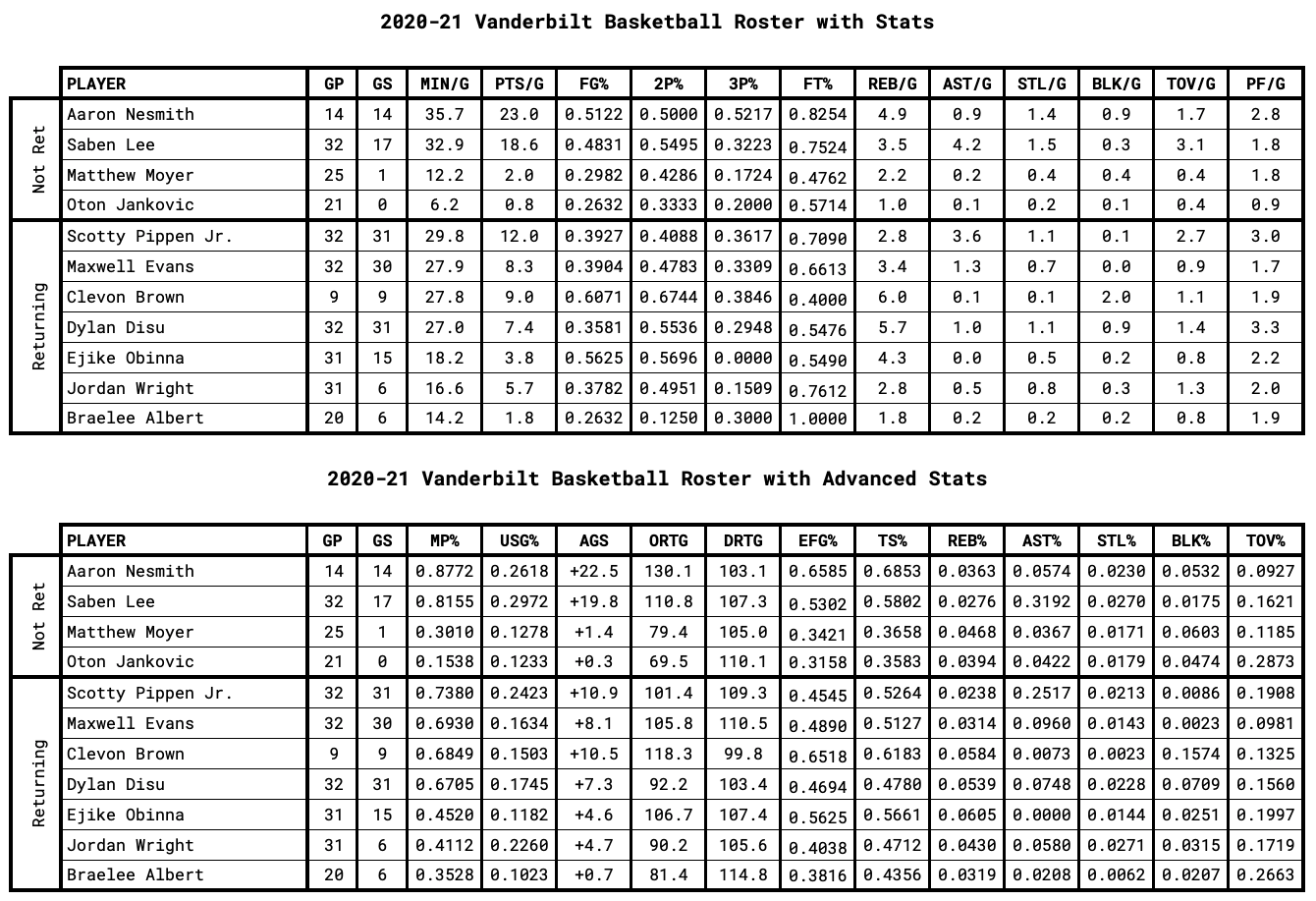 Vanderbilt doesn’t have the most impressive recruiting class, but they make up for that through transfers. DJ Harvey and Quentin Millora-Brown are eligible after sitting out last season due to transfer rules. Isaac McBride will get to start right away after transferring from Kansas before playing a game for the Jayhawks.

High school prospects Tyrin Lawrence, Myles Stute, and Akeem Odusipe will all have time to develop behind the more experienced players and could manage to provide a contribution in ways that wouldn’t be expected based on their ranking alone.

There should be no problem scoring and getting production from Vanderbilt’s backcourt this season and the wealth of talent should provide competition within the guards to keep them all playing at their best. I think Quenton Jackson will get the nod to start the year because he had so much starting experience from last season and Jaxson Robinson just has too much talent not to be utilized. Right behind them will be Jay Jay Chandler, Cashius McNeilly, and Andre Gordon all fighting for minutes.

However, the front-court isn’t nearly as deep. After starters Flagg, Miller, and Marfo, there’s just one other scholarship forward listed on the roster and that’s 6’10” sophomore Jonathan Aku. Especially with the added risk of missing guys for COVID-19, the lack of availability of forwards could pose a serious issue down the stretch for the Aggies. 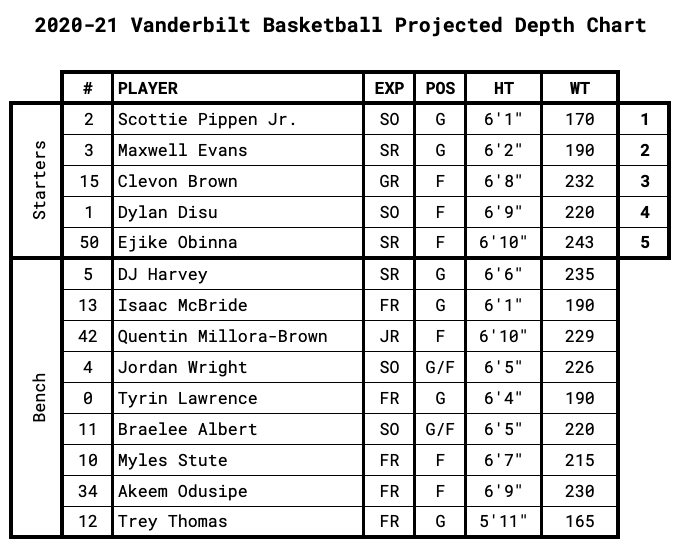 Overall, while there are possibilities for players to break out this season and Vanderbilt to take a step forward, the season will likely be another familiar one with quite a few losses. The Commodores didn’t back away from a challenge and have a pretty tough non-conference schedule including games against UConn, BYU or USC, SMU, and Davidson all away from home. I have each of those and the home game against Richmond all being losses to give Vanderbilt just a 4-5 record heading into SEC play.

The conference schedule isn’t any friendlier to the Dores since they don’t even get to play the other worse team, Georgia, at home. Home games against Mississippi State and Texas A&M might be the best opportunities for a few wins and I could also see Arkansas and Auburn be potential upsets when they have to travel to Memorial Gym.

While I don’t see a lot of wins on Vanderbilt’s schedule this season, the quality of their play will say a lot about this season and what the future looks like for the Commodores. Stackhouse managed to get a few wins last season in year one and if they can continue to look like they’re playing better against tough SEC competition and show the development of the young talent like Pippen Jr. and Evans, there might be a brighter future than the past few seasons. 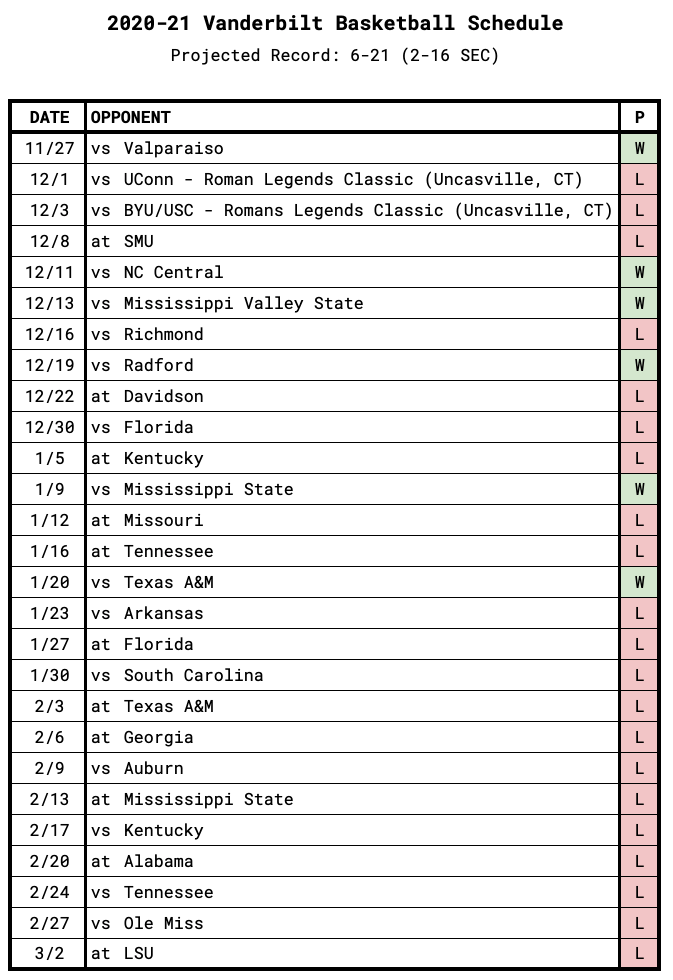