Buzz Williams enters year two in College Station after managing to get his team to rally from a 6-6 non-conference record to finish 10-8 in the SEC in year one. With another difficult non-conference schedule and arguably a better SEC from top to bottom, it might be difficult for Williams to repeat the top-half finish in league play, but I also wouldn’t be surprised if he did it again since Texas A&M does have enough talent.

While I have the Aggies down at 11th in my preseason power rankings, that’s mostly because the teams above them are better instead of them being bad. I think there’s still a decent gap between them and the bottom three teams and they have the opportunity to be a surprise if they can overachieve like they did last season. It’s just going to be a massive challenge this year for any of the teams in the middle of the pack to set themselves apart and I just don’t see enough upside from Texas A&M to pick them over other teams like Missouri, South Carolina, and Ole Miss.

Texas A&M’s biggest loss is certainly Josh Nebo, who led the team in points, field goal percentage, adjusted game score, and almost all other advanced stats. Wendell Mitchell is also gone after graduating as one of the other two players to average double-digit points for the Aggies last season.

Savion Flagg is the only double-digit scorer to return and he was also the team leader in assist. Flagg will have to continue to affect the game in many ways if the Aggies are going to outperform my expectations this season. Emanuel Miller will add some much-needed depth in the front-court and should continue to pull down boards, even if he likely won’t lead the team again in that stat since the nation’s leading rebounder from last year, Kevin Marfo, transferred to Texas A&M in the offseason. 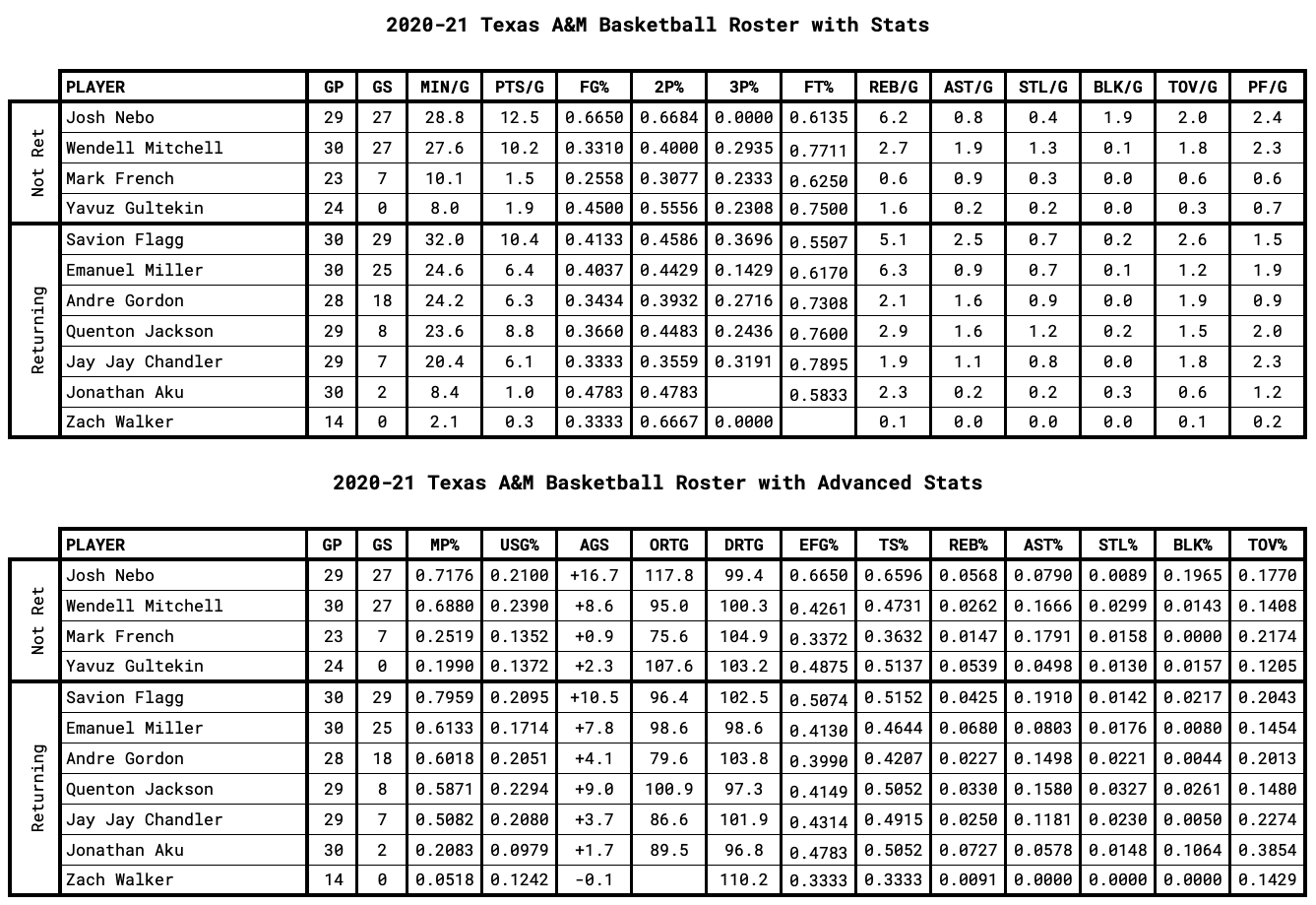 Speaking of Kevin Marfo, he joins the Aggies as one of the best grad transfers in the country and will likely be the primary player tasked with replacing Josh Nebo. The jump from the MAAC to the SEC might pose an issue, but Marfo should be good enough to overcome the increase in talent that he’s used to.

Texas A&M will also add three key young guards including Cashius McNeilly who redshirted his first season last year, Jaxson Robinson who reclassified into the 2020 class after being one of the better players in 2021, and Hassan Diarra who is also a 4-star, top-75 high school prospect.

There should be no problem scoring and getting production from Texas A&M’s backcourt this season and the wealth of talent should provide competition within the guards to keep them all playing at their best. I think Quenton Jackson will get the nod to start the year because he had so much starting experience from last season and Jaxson Robinson just has too much talent not to be utilized. Right behind them will be Jay Jay Chandler, Cashius McNeilly, and Andre Gordon all fighting for minutes.

However, the front-court isn’t nearly as deep. After starters Flagg, Miller, and Marfo, there’s just one other scholarship forward listed on the roster and that’s 6’10” sophomore Jonathan Aku. Especially with the added risk of missing guys for COVID-19, the lack of availability of forwards could pose a serious issue down the stretch for the Aggies. 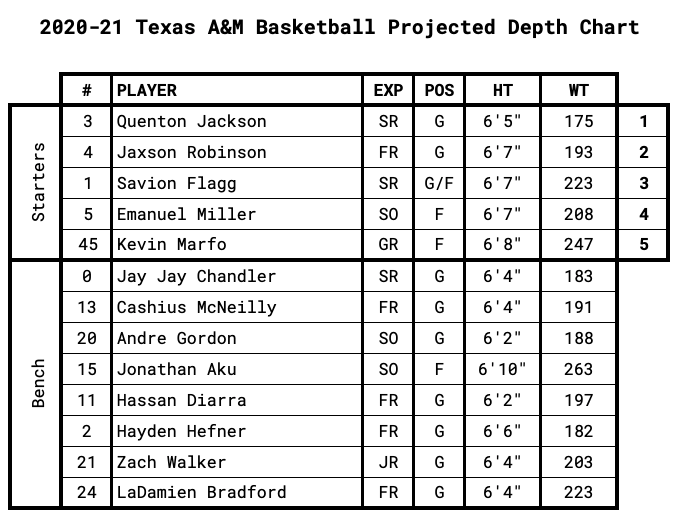 Once again, I think that Texas A&M can be a good team this season, especially since I trust Buzz Williams. However, I think they’ll be a good team amongst mostly pretty good or great SEC teams in the middle of the conference. They also don’t get an easy start where they’ll have to face West Virginia and then either St. Mary’s or Memphis in the first two days of the season. The Aggies should be able to get at least one win in the Bad Boy Mowers Crossover Classic, and then they have two easier games before taking on TCU in Fort Worth.

The start of SEC play also won’t be kind to the Aggies where they go on the road to face LSU at the very beginning followed by Auburn at home, South Carolina on the road, and Tennessee at home. I think A&M will be a better team at the time they play Auburn early in the year, and the home crowd should help them get an early SEC win and maybe get more momentum than I’m giving them credit for in my predictions.

I have the Aggies losing to both Mississippi State and Vanderbilt on the road, although those are both certainly two of the games that could certainly go the other way and make Texas A&M’s overall record better. I just think if Vanderbilt and Mississippi State are going to get a few wins in the SEC, home games against a team like A&M that is at the bottom of the next tier could be one of their few opportunities.

The Aggies should have the opportunity to finish strong again with home games against Vanderbilt, Georgia, Arkansas, and Mississippi State in the last month of the season. While my projected record for A&M doesn’t look great, they’re probably the team that I would feel most confident in surpassing my predictions. I just have them losing most of the close games where they also have an almost equal opportunity to get some wins. 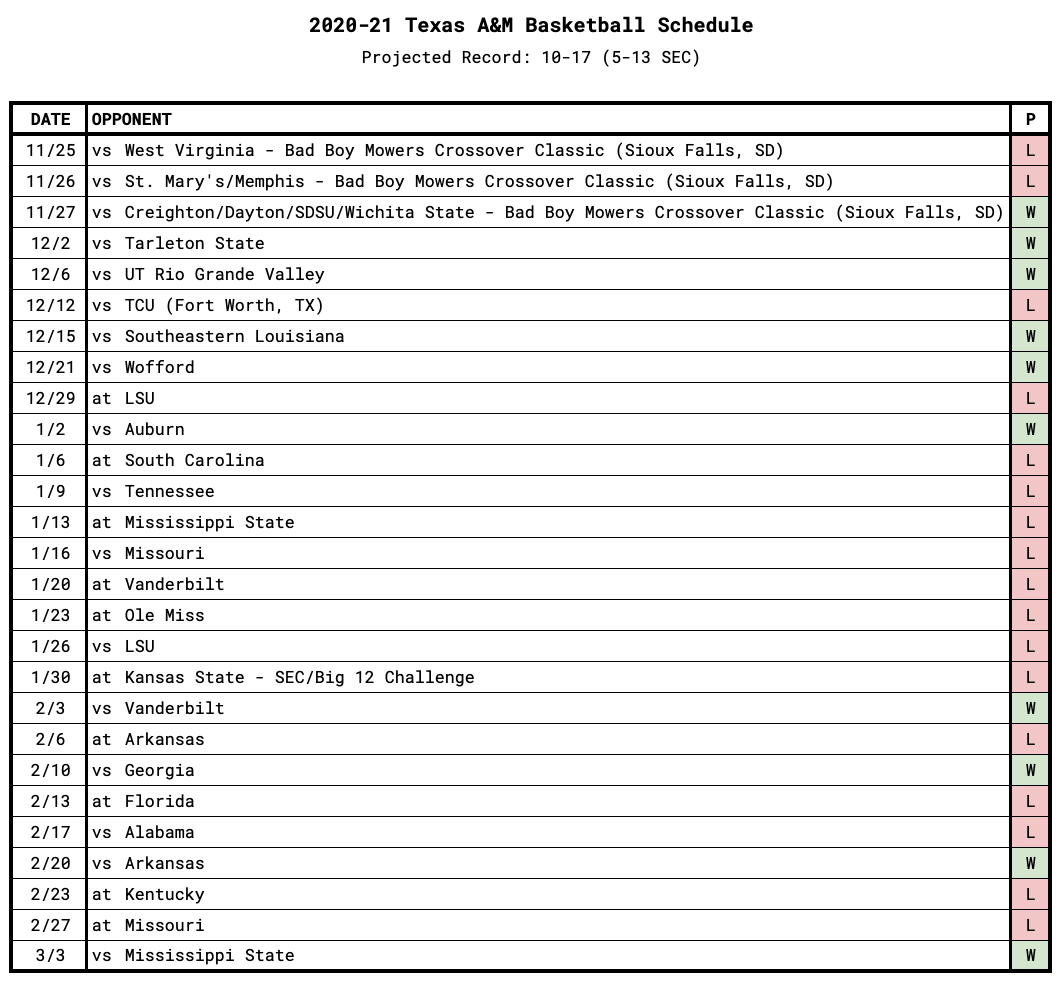