Last season was a bit of a down year for Tennessee under Rick Barnes, but a lot of that had to do with key injuries and other factors. To make up for it, Tennessee returns almost all of the talent from last year and adds even more which makes them the best team in the SEC, in my eyes, going into 2020-2021.

Rick Barnes has done a nice job developing lower-ranked guys and international prospects over the past few years, but now he’s starting to also sign top-ranked high school prospects, so the Volunteers might be able to take the next step on the national stage. The non-conference schedule this season is tough enough to challenge Tennessee and get them in front of enough fans, but also manageable enough that they could enter SEC play with a record good enough to keep warranting national attention.

The SEC schedule will be tough for Tennessee, as they’ll come in with the target on their backs after being selected as the media’s preseason favorite, but the Volunteers should have plenty of talent to live up to that billing and could come out on top. Tennessee joins Kentucky in a tier by themselves at the top of a very talented league this season. The returning talent plus the young talent is most likely going to be too much for most SEC teams to match.

Lamonte Turner going down with an injury early last season certainly derailed a lot of Tennessee’s expectations, but it also gave Santiago Vescovi extra time to adjust to running the offense early. That experience will be valuable going into this season as he looks to expand on his impressive double-digit scoring average and assist rate over 25 percent.

I think Vescovi will be a big key piece for Tennessee’s ceiling this season, but he’ll have the support of fellow returners Yves Pons and John Fulkerson who both do just about everything and are certainly worthy of all their preseason hype. Fulkerson is a contender for SEC Player of the Year and Pons just does so many things well that make him an invaluable asset, like block almost two and a half shots per game. 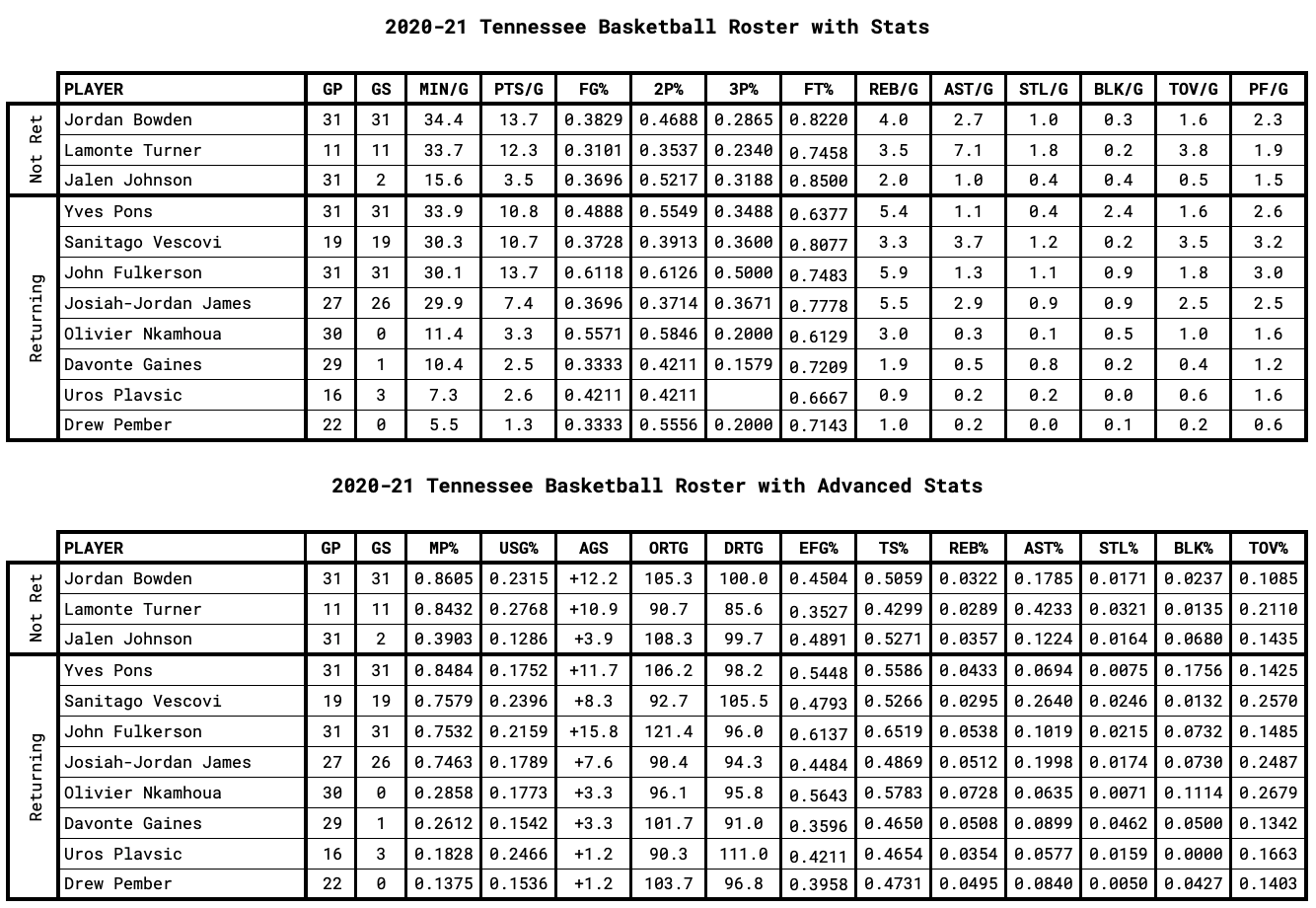 Rick Barnes has already made Tennessee nationally relevant and won a regular-season SEC championship, but he’s done that all with just one 5-star prospect, Josiah-Jordan James last season. Now he’ll double that number in one class with the addition of Jaden Springer and Keon Johnson. Both highly rated freshmen will still have plenty of opportunities to contribute and show what they can bring to college basketball, but they also have the benefit of not being heavily relied on since they’re joining an already talented team.

Along with the two 5-stars, Tennessee also adds more experience with Victor Bailey Jr. and E.J. Anosike. Bailey Jr. has already had a year in Knoxville to learn the program and Anosike will provide more depth in the front-court as he takes the step up from the Northeast Conference to the SEC.

Four starters are back from last year’s team, and each will hold onto their starting spot. They’ll be joined by freshman Jaden Springer and have plenty more talent challenging them for their starting jobs most of the year as well. Tennessee should have a rotation of eight or nine guys that could each likely be a starter on other SEC teams.

Size shouldn’t be an issue for the Volunteers as their smallest guy, the point guard, still comes in at 6’3” and nine of their players are at least 6’6”. The starting five might be a little small in the front-court, but both Yves Pons and John Fulkerson have done more than enough to prove that they can each handle their own in creative ways.

We’ll get a good idea of how good Tennessee is early on when they face one of the best teams in college basketball, Gonzaga, early on in the Jimmy V Classic. While the main non-conference schedule isn’t a cakewalk, Gonzaga should be the only team that gives Tennessee any real trouble. A road game at Notre Dame could be tricky, especially after playing Gonzaga, but I think the Vols can either carry the major momentum from beating the Zags or use it as an opportunity to show they can bounce back quickly after what I predict will be their only non-conference loss.

In SEC play, I have Tennessee getting to the SEC/Big 12 Challenge without a loss, mostly because they don’t face Kentucky in the first half and their biggest road competition will just be Missouri, South Carolina, and Florida. The final month of conference play will be more difficult for Tennessee with road games against Ole Miss, Kentucky, LSU, and Auburn where I see them suffering their three losses. Kentucky and LSU are two of the teams on or closest to Tennessee’s level of talent this season and Auburn has had Tennessee’s number in recent years, at in the last week of the season, their young, talented roster should be coming around.

Because Tennessee only plays Kentucky once, and I have both teams finishing 15-3, the Wildcats would get the top seed in my predictions, but both would have a share of the regular-season title and would likely have a very good chance of settling the “tie” in the SEC Tournament Championship Game. 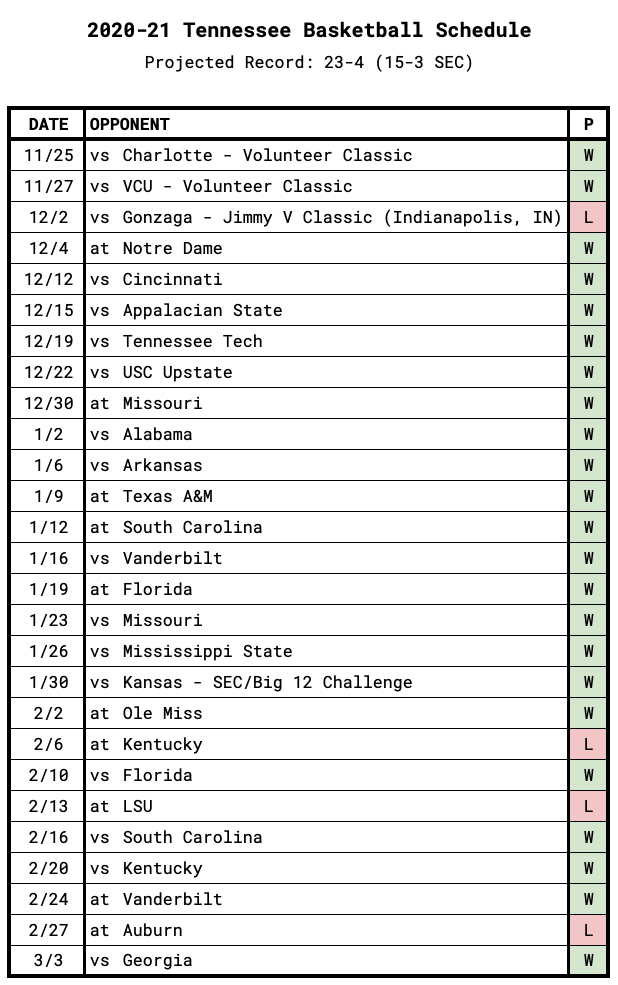