While I don’t think he’s fully shown it yet, I have long realized that Kermit Davis is one of the better coaches in the SEC, especially when it comes to X’s and O’s and in-game performance. Now that he has one of his most talented, well-rounded teams since coming to Oxford, Ole Miss is a popular pick to be a team that can make some noise in the SEC this season.

Consider me on the Ole Miss hype train going into this year. The Rebels return three of their top five scorers including Devontae Shuler who looks like he can step in as the primary scoring guard that Ole Miss usually has, most recently Breein Tyree. Along with returning several key players, Ole Miss also adds three transfers, two guys who redshirted last season, and a top-40 prospect in Matthew Murrell.

The talent is certainly there to be a good team in the SEC and if Kermit Davis can continue to outcoach some of the teams as he has in the past, this talented group could contend closer to the top of the league than even I expect them to. Ole Miss might have a better top seven or eight players than anyone in the SEC not named Kentucky and Tennessee and that will benefit them as the season goes on.

Replacing Breein Tyree, who scored almost 20 points per game last year, won’t be an easy task, but I think Devontae Shuler, Matthew Murrell, and Jarkel Joiner should provide enough of a scoring threat in the backcourt to well make up for the loss. The frontcourt should be equally strong for the Rebels this season with KJ Buffen and Khadim Sky returning and Luis Rodriguez being back after a foot injury early into last season.

Rodriguez in particular was showing several good signs in the first five starts of the season before he went down with the injury, especially in regards to his advanced stats. If he can continue to put up those numbers against better teams, including in SEC play, Ole Miss will be a really dangerous and deep team. 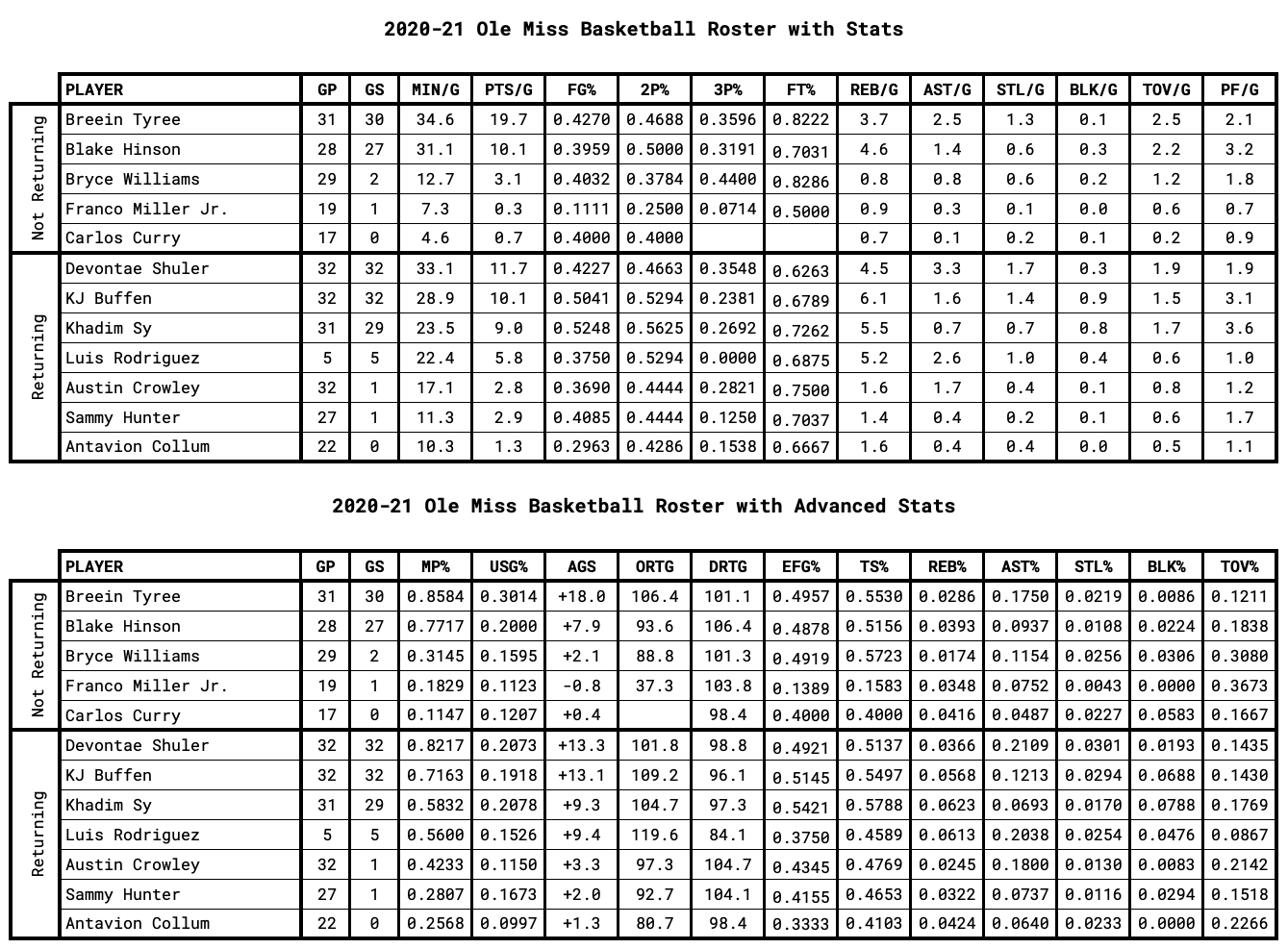 The returning players for Ole Miss are certainly good, but the newcomers that they also add is what takes them from a sleeper to a legitimate threat in the SEC this season. Kermit Davis has already said some good things about Jarkel Joiner and he’ll also be expecting major production from grad transfers Dimencio Vaughn and Romello White.

Matthew Murrell, a 4-star, top-40 prospect, will come in and provide even more talent and scoring ability to the Ole Miss backcourt alongside Devontae Shuler.

Shon Robinson, who redshirted the 2019-2020 season, and Robert Allen, who was granted immediate eligibility after transferring from Samford will just add more much-needed depth and size in the frontcourt.

The three returning starters from last season, Shuler, Buffen, and Sy will all hold onto their starting spots this season and then they’re joined by Romello White down low and Matthew Murrell at the top of the key. Jarkel Joiner should provide a major spark whether he comes off the bench or works his way into the starting lineup.

I touched on Luis Rodriguez’s potential if he builds on his hot start to last season, but he and Crowley will work to expand their usefulness as sophomores at Ole Miss. 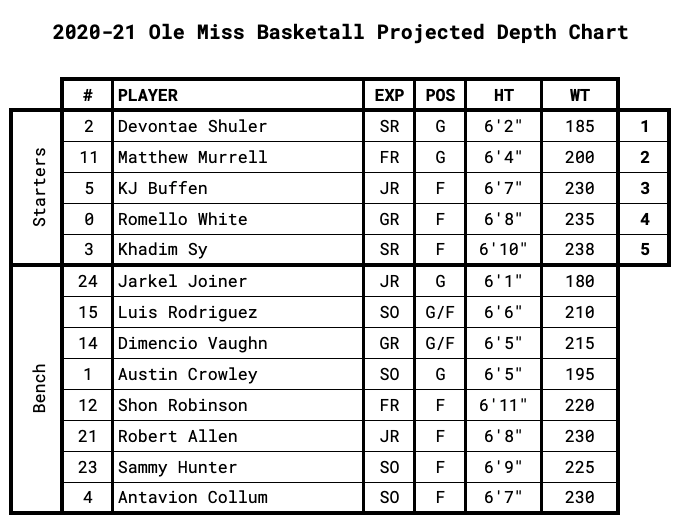 Ole Miss will start the season with a nice warmup at home where they host the Justin Reed Ole Miss Classic MTE and face Central Arkansas, Jackson State, and Arkansas State. After that, they’ll have their first big test of the season against Memphis. I have Ole Miss beating the Tigers in a close game, and if they do, this could be an early sign that they are going to be as good as some are expecting. The only non-conference loss for Ole Miss could come in one of two road games, more likely at Dayton.

In the SEC, Ole Miss has an early opportunity to set themselves apart from teams that I have in a similar tier as the Rebels. Kermit Davis’s squad will face Alabama, Auburn, South Carolina, and Florida all within the first few weeks. The back half of Ole Miss’s schedule will be a little more difficult with road games at Arkansas, Auburn, South Carolina, and Missouri as well as Tennessee, LSU, and Kentucky at home. I’m going ahead and picking Ole Miss to knock off Kentucky in their final game of the season and that game could end up having SEC championship and seeding implications for at least one of the two.

In the scenario I’ve predicted, Ole Miss will finish on the worst end of the four-way tie at 11-7, a win or two more could easily have the Rebels closer to the top three in the league. I’m expecting big things out of Ole Miss this year, and at the very least, I think they’ll be a fun team to watch all season long. 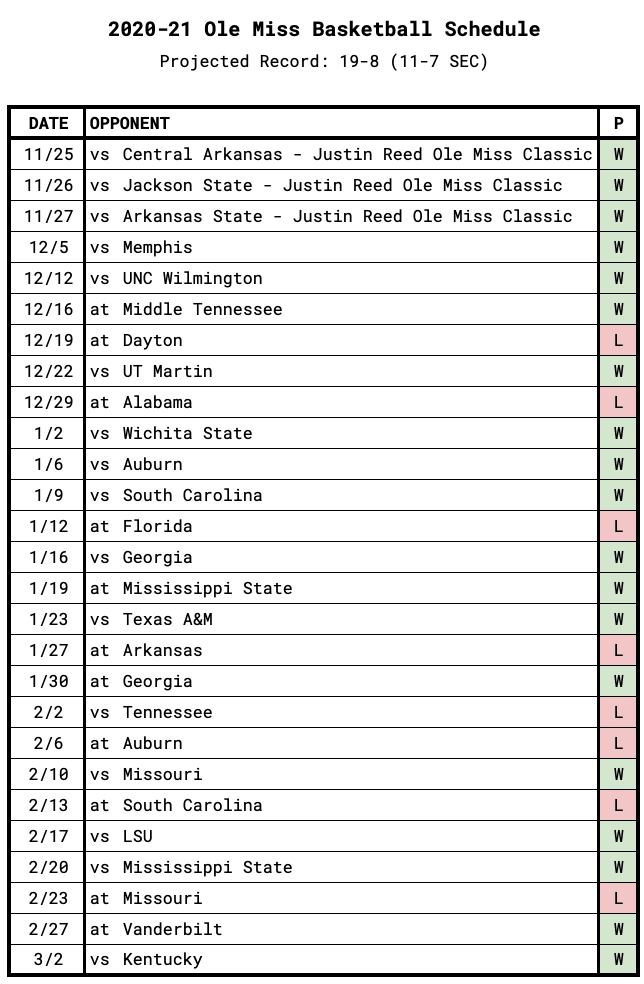