It is never a good sign when eight different players leave the program, and it’s an even worse sign when only one of them was a graduating senior. That’s exactly what Ben Howland and Mississippi State are coming off of in a year where rebuilding a team will likely be even harder due to the pandemic that’s been going on since March. If Mississippi State had managed to return Nick Weatherspoon, Robert Woodard, and Reggie Perry, they might be one of the favorites to finish near the top of the SEC.

Instead, they only return a handful of players including Abdul Adu, D.J. Stewart, and Iverson Molinar. While the three played in every game last season, and some other key pieces are joining the team, none of it makes up for all the talent that the Bulldogs have lost and I don’t think it’ll be a good year in Starkville.

Mississippi State managed to finish fourth in the SEC last season before the SEC Tournament was canceled, but they might wind up on the exact opposite side of the standings this year and are going into the season looking like one of the worst teams in the league. Maybe Ben Howland will show off an ability to find diamonds in the rough with one or two of his 3-star prospects, but I wouldn’t count on this being anything more than a rough rebuilding year for the Bulldogs.

The Bulldogs do return two players that started in a majority of games last season, but between the two, they just averaged barely over fourteen points per game which won’t be enough to get it done in the SEC. Abdul Ado has the chance to be one of the better big men in the SEC, but he’ll need to show a lot more on the offensive end if he’s going to will Mississippi State to some wins this season.

Ben Howland will be hoping that at least two of Woodard, Perry, and Weatherspoon hear their names called on NBA Draft night, otherwise it’ll always be hard to realize that any combination of those guys, who averaged a combined 40+ points a game could have been back this season. 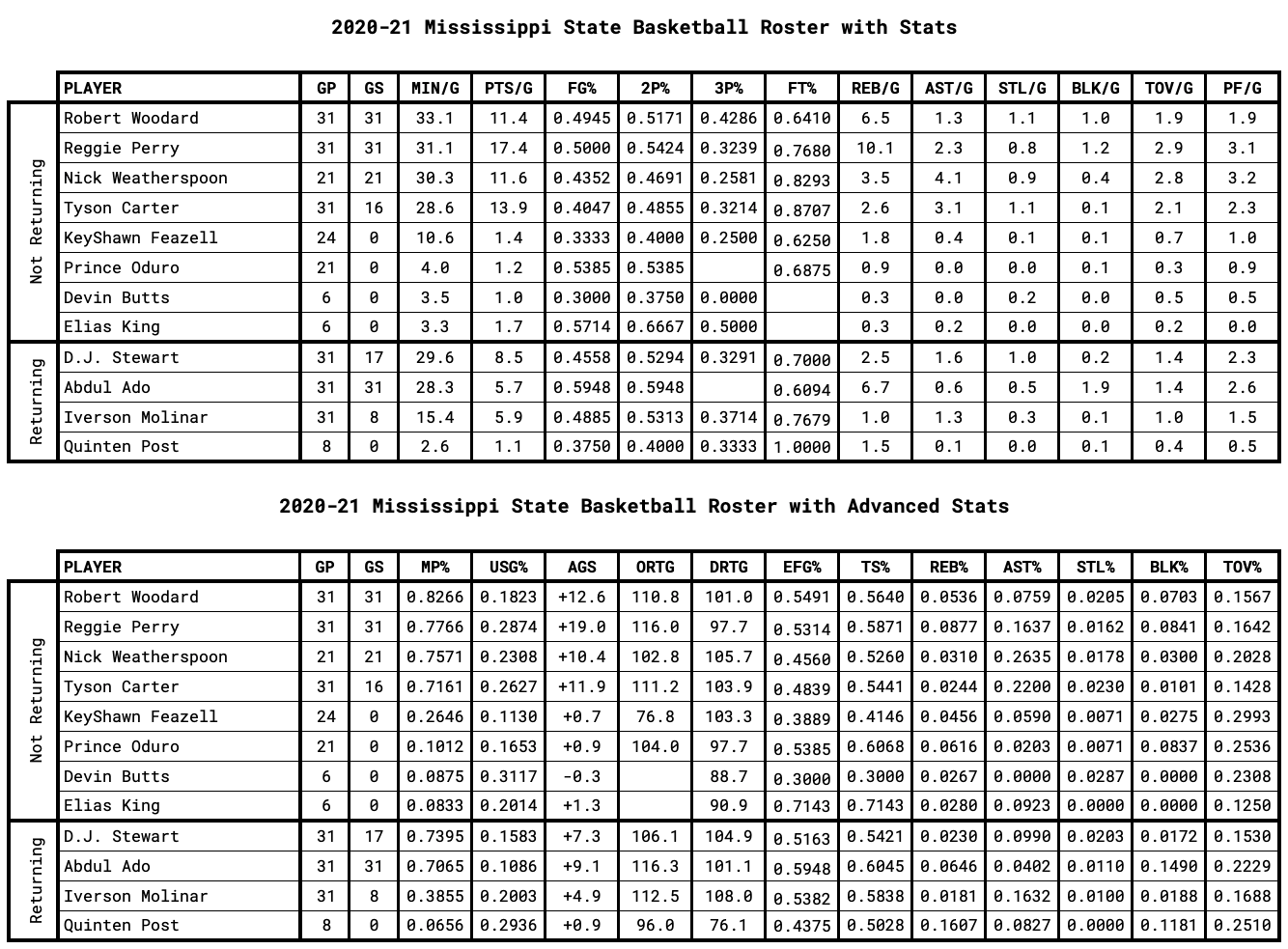 Mississippi State is very fortunate that the pandemic likely led to Javian Davis getting immediate eligibility after transferring from Alabama. Davis brings even more size to the Bulldogs and more importantly he has proven that he can contribute in the SEC already.

4-star guard Deivon Smith could also be a bright spot for Ben Howland, and whether or not he lives up to his top-60 high school ranking, he should get plenty of opportunities to show off his talents on a team that lost most of its backcourt from a year ago. Other than Smith, just four lowly ranked 3-stars are joining the squad who will have to prove what they can bring to the SEC and college basketball.

Abdul Ado will be the senior leader of this team and lock down the post once again as the starting center. Joining him will be two of the other returning players in D.J. Stewart and Iverson Molinar. Javian Davis should work his way into a starting spot after transferring from Alabama where he showed signs of being good while playing in every game for the Crimson Tide last season. The last remaining starting spot, and maybe the most important, will probably have to go to talented freshman Deivon Smith.

On the bench, there’s plenty of size for Mississippi State to work with and Ben Howland will need to figure out how to use all of the extra size and length to be an advantage in a league that is moving more and more towards uptempo basketball. 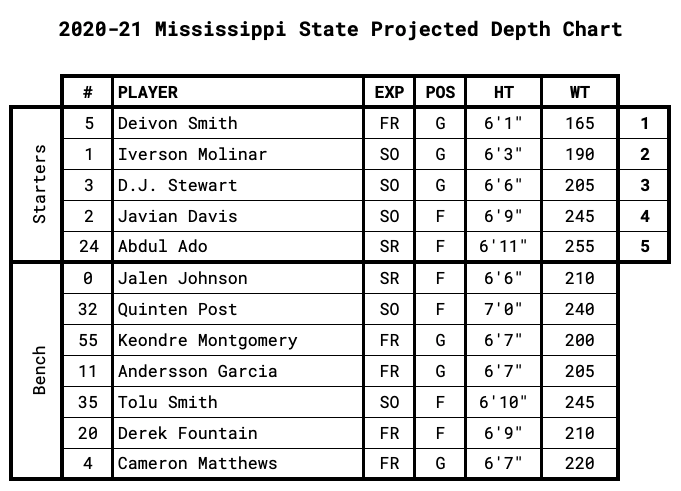 Starting the season against Clemson in the Cancun Challenge probably isn’t a good sign for Mississippi State and I expect them to start and end the year with losses with plenty of others in between. There’s a brief window of easier games in the non-conference schedule, but the Bulldogs still have tough matchups against Dayton and Utah State before they make it to SEC play.

Unfortunately for Mississippi State, they only get to play the other teams I predict to be near the bottom of the league four total times and just two of those are at home. The home games against Texas A&M and Vanderbilt could wind up being the Bulldogs’ only wins in conference play.

Drawing Iowa State at home could give Mississippi State a nice chance at a mid-season bright spot and a win for the SEC in the SEC/Big 12 Challenge.

Ben Howland had done enough in his time at Mississippi State to show promise and justify himself as one of the major coaches hired over the last decade, but this year might be his toughest coaching challenge. The goal will be to win some games that they probably shouldn’t and hopefully find a few key players out of the lower-ranked recruits they’re bringing in. 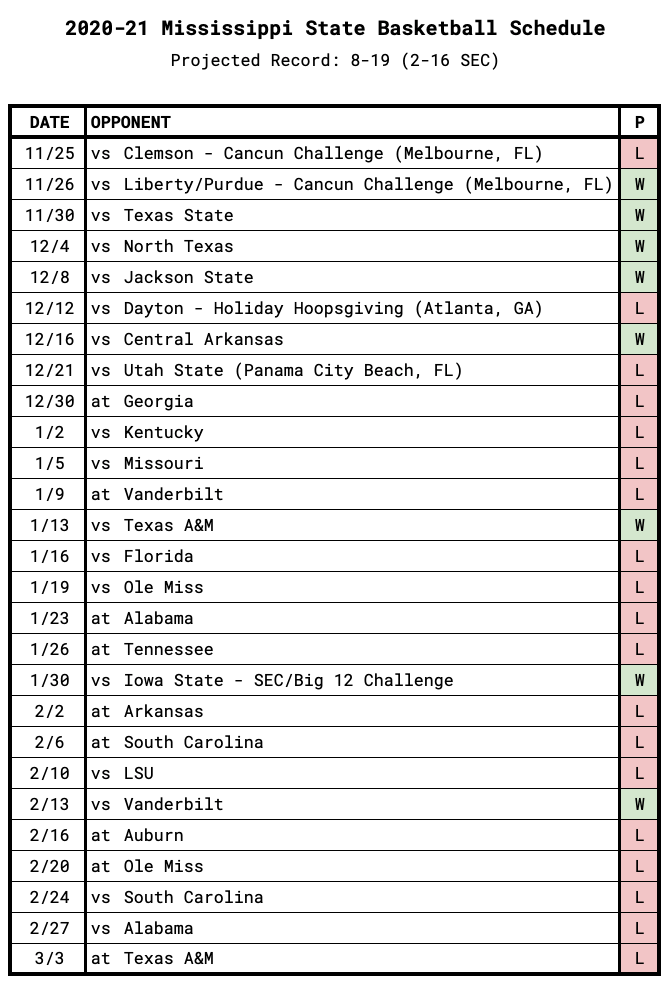