Tom Crean hasn’t been off to a great start in Athens, and after losing projected top-5 pick Anthony Edwards and four other key players, it doesn’t look like year three will be any better. Georgia had one of the best players in the country last season and still only managed to finish with a perfect 0.500 record on the year and second to last place in the SEC.

Now, without Anthony Edwards, the Bulldogs will rely on five rising sophomores, three grad transfers, and three junior college guys to survive another year. And surviving is about the goal I’d give for this year’s Georgia team. The grad transfers that they brought in from George Mason, Stony Brook, and Virginia Tech should ad quality play, but I don’t think having three grad transfers immediately enter your projected starting lineup is a good recipe for success.

I don’t think Tom Crean will get fired after a pandemic season, but unless he surprises people this year or pulls in another massive 2021 recruiting class, his time at Georgia could be even shorter than most expected.

Georgia is losing their two top scorers, two top rebounders, and two top minute earners from last season with both Anthony Edwards and Rayshaun Hammonds declaring early for the NBA Draft. Edwards will likely be a top pick in the draft, but I’m sure Tom Crean and Georgia fans wish that Hammonds had opted to return. If Hammonds had chosen to stay for his senior year, he and Sahvir Wheeler, who showed many bright spots as a freshman, could have provided enough talent for the Bulldogs to build around and succeed with.

With no rising seniors and a bunch of sophomores going into 2020-2021, it was probably smart for Tom Crean to go after and land so many grad transfers. The three grad transfers that he got commitments from, Justin Kier, Andrew Garcia, and P.J. Horne, should add enough talent and experience to make Georgia a team worthy of playing in the SEC.

After landing Anthony Edwards in the previous class, I think most fans would have expected Tom Crean to follow it up with more than just a single 4-star recruit and three junior college guys. But that’s where we are and Georgia will be hoping that the freshmen show promise this season like Wheeler and others did last year while also hoping that they have found a few steals from the junior college guys. At the very least, Josh Taylor, Tyron McMillian, and Jonathan Ned should add some needed size for a team that certainly won’t be one of the biggest teams in the SEC this season.

Sahvir Wheeler should be ready to step into the starting point guard spot this season after leading the team in assists last year despite only starting 17 games and playing less than 28 minutes a game. He’ll be joined by the three grad transfers and the other rising sophomore that also played significant minutes last year, Toumani Camara.

Tye Fagan and Christian Brown, whom both played in almost every game last year, should be the first off the bench as they try to further establish roles in the rotation. After them, it’ll be mostly the freshman and junior college guys fighting for minutes and trying to show where they can contribute. 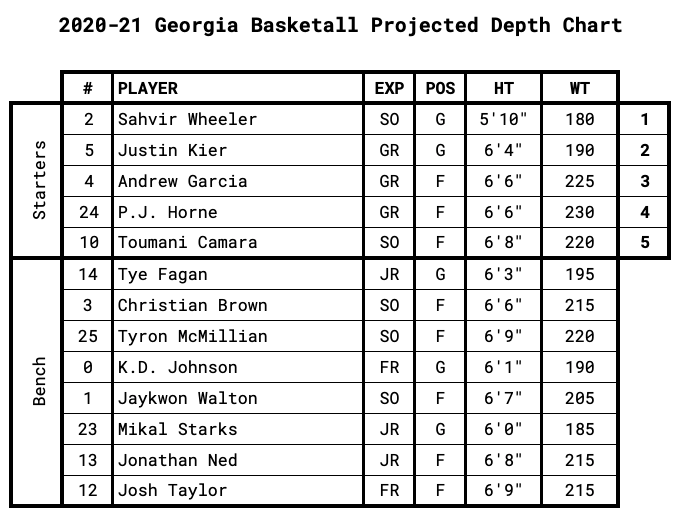 Georgia opted to skip out on any MTEs this season and instead will just play seven games at home to start the year. Don’t be fooled when the Bulldogs likely have a really good record after non-conference play because the only worthy team coming to Athens is Cincinnati and all games will be at home meaning no travel until 2021.

Coming off a weak non-conference time and plenty of opportunities to find a groove, Georgia will also get the treat of having one of the other lower teams in the SEC at home to start the conference schedule. But once Georgia gets by Mississippi State it’s likely going to be another entire month before they could see their next win. Overall I have the Bulldogs just getting home wins against Mississippi State, Vanderbilt, and Missouri with that being enough to keep them out of the very bottom of the SEC standings.

That third win could also come against a team like Auburn earlier in the conference schedule while the Tigers are also figuring out their growing pains as a young team. 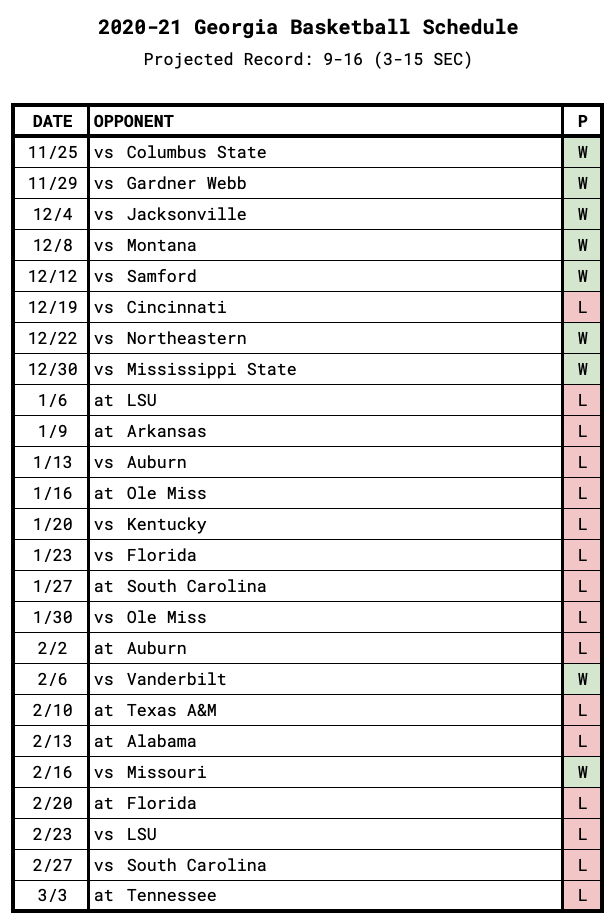