Kentucky once again loses almost every single player from their previous season and also once again replaces them with a top recruiting class and a few key transfers. It’s beginning to certainly reach the point where Kentucky’s ceiling, especially on the national level, is determined by how well the highly ranked high school prospects live up to their expectations.

This season, the raw talent of Kentucky might be able to play an even bigger advantage when opposing teams likely won’t have as hostile of environments as a full crowd usually provides. With a shortened offseason, it might lead to more teams not having enough time to implement set schemes, and the ability to just throw a bunch of highly talented players to just play basketball could be even more useful than usual.

Despite how well the young talent performs for Kentucky, the final granting of immediate eligibility of Olivier Sarr elevates the Wildcats once again to league favorite. It was assumed that he would get the waiver, but after it dragging out for some time, there was a little bit of doubt that Calipari would get his final piece.

This section isn’t super useful for Kentucky’s preview other than to show how good all the players that left were. Keion Brooks Jr. is the lone returning player and even he only played 15.1 minutes per game and started just six times. Brooks will look to expand his role, and if he can have the sophomore jump that players like Immanuel Quickley and others have had at Kentucky, it could make the Wildcats even more dangerous at the end of the year. 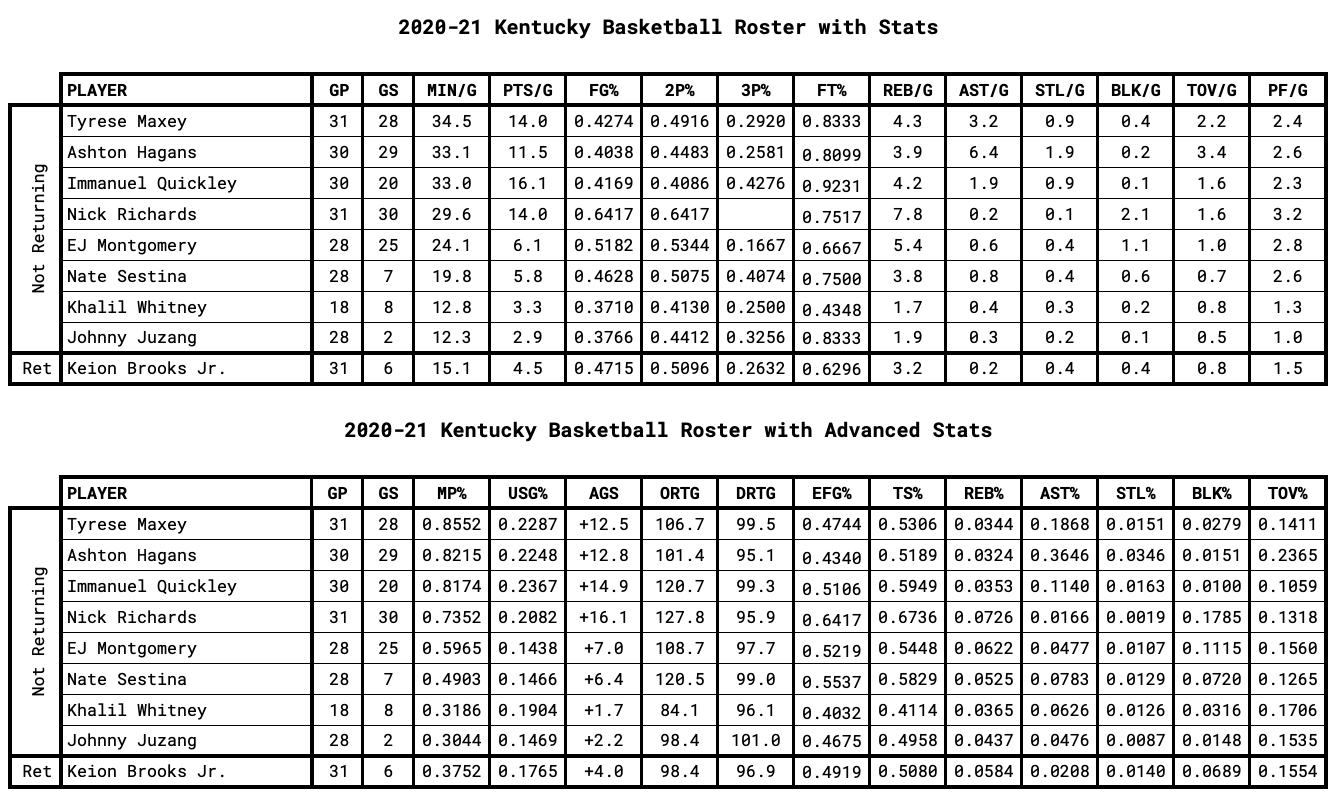 The newcomers are always where John Calipari’s Kentucky teams thrive. This season is no different as the Wildcats bring in the top high school recruiting class with two 5-star, top-10 players in Brandon Boston Jr. and Terrence Clarke as well as four more 4-star guys and three transfers. Dontaie Allen is also available after sitting out last season to fully heal from a knee injury that happened during his senior year of high school.

Brandon Boston Jr. and Terrence Clarke are both most likely going to be some of the best freshmen, and players overall, both in the SEC and college basketball. But as I alluded to above, the addition and eligibility of Olivier Sarr is most likely the key piece that the Wildcats need to content for another SEC title. Davion Mintz’s grad transferring from Creighton should also give the Wildcats more experience at the point guard position while Devin Askew can morph into the role as a backup player, at least initially.

I gave the nod to Davion Mintz at the starting point guard spot because I think the experience will be much more valuable in an odd season like this one, especially early in the year. Askew could be starting towards the end of the year, but I believe both players will be key in running the show for the Wildcats.

Keion Brooks Jr. gets a starting spot as the lone returning player and then Olivier Sarr will anchor the five spot now that he’s finally officially eligible. The last two starting spots go to the two top-10 high school prospects and all other newcomers will fight for minutes off the bench. It’ll be interesting to see how deep Calipari goes this year because while Toppin was brought in mostly as a project to develop, the extra depth he provides after also being granted eligibility could be even more useful this season because of the added risks COVID-19 brings. 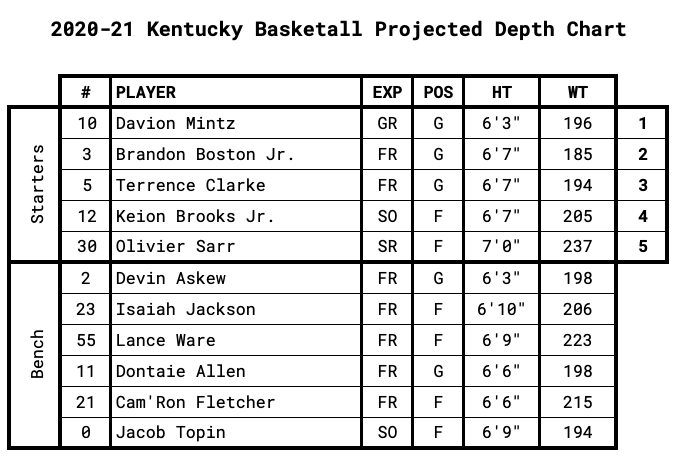 As Kentucky’s non-conference schedule usually goes, the Wildcats have a few very tough games and then a bunch of cupcakes in between. This year I think Kentucky gets through their non-conference schedule most unscathed except for the game versus Kansas and trip to Louisville. The matchup against Georgia Tech in Atlanta could also wind up being an interesting game, especially early in the year.

When the Wildcats get to SEC play, this is where I think the lack of full crowds will benefit this young talented team even more. Kentucky is used to getting most team’s best from both the team and fans but with fans limited this season, that best might not be enough to give too many teams the edge. I’ve got the Wildcats losing road games at Florida, Tennessee, and Ole Miss but the games at Alabama and Missouri could also pose some problems.

At the end of it all, I have both Kentucky and Tennessee finishing the year at the top of the standing with the Wildcats getting the edge for the first seed in the SEC Tournament through tiebreakers. When I made my power rankings I had Kentucky and Tennessee both as clearer favorites at the top and I think both have what it takes to get more wins against the other top teams while those teams split more series with each other.