Prep to Pros: Part Two - Draft Busts and Players That Didn't Quite Live Up to the Hype

In this two-part series, I’m comparing high school recruit rankings and NBA selections for basketball players across the SEC in recent years. The first part highlighted the hidden gems and development success stories where unranked or low ranked high school players used their college years to end up getting drafted or signed to an NBA roster at a much higher position than their high school ranking.

In part two, I take a look at the opposite situation, where highly ranked recruits fell in the draft or ended up not making it to the NBA at all. In this post, I’m labeling these players a “bust” but that’s often unfair given a lot of these players were very highly rated and had nowhere to go but down. Players that were highly rated and then didn’t make it to the NBA certainly count as busts, and I’ll focus on them mostly, but other players mentioned in this post might have just fallen a few spots.

For both of the posts, I am using the 247 Sports Composite ranking for high school prospects since 2003 and then comparing it to a player’s draft position or them signing an undrafted free agent deal and playing in at least one NBA game. I am also only considering players that were signed by an SEC school and then went to the NBA from that same SEC school. Transfers to or from other NCAA schools are not considered.

The 2003 recruiting class had nine different players drop from their high school ranking to their position after college with just two falling from inside the top-30 to out of the NBA completely.

Regis Koundjia played in 27 games his freshman year at LSU, but then played just six in his sophomore season before transferring to George Washington for his final two years of college basketball.

In his first season at Arkansas, Olu Famutimi made the SEC All-Freshman Team and the played in every game his sophomore year. Famutimi opted to declare early for the NBA draft after just two years in college and ultimately went undrafted and never made it to an NBA game.

Randolph Morris from Kentucky had the biggest drop going from the eighth overall recruit out of high school to an undrafted free agent two years later.

The 2005 recruiting class had nine players that fell from their high school ranking to their after college position. Four players went from inside the top-30 out of high school to not playing in the NBA at all.

Mike Mercer only played two seasons at Georgia, and managed to make the SEC All-Freshman Team, before transferring to South Florida for his final two years of college basketball where most of his major stats declined, despite playing in a lesser league.

Jamont Gordon only played three years at Mississippi State where he was on the SEC All-Freshman Team and then twice on the All-SEC Team before leaving early only to end up undrafted and playing professionally overseas.

Magnum Rolle had two non-impressive years at LSU before ultimately deciding to transfer to Louisiana Tech where he found a little bit more success. Despite briefly making it to the D-League, Rolle never made it to an NBA roster.

After laying five total seasons at LSU, Tasmin Mitchell never made it to the NBA. After a few years playing in various international leagues, Mitchell eventually found a spot on Will Wade’s coaching staff where he has served as an assistant coach for LSU basketball since 2019.

The 2006 recruiting class only had six different players fall below their high school ranking with just one player falling from inside the top-30 to out of the NBA.

Duke Crews only played two seasons at Tennessee before being dismissed from the team and never made it to the NBA.

The 2007 recruiting class had ten different players drop from their high school ranking to their after college position but non of the guys within the top-30 high school rankings fell outside of the NBA draft. Jai Lucas from Florida, was the highest recruit, ranked 33rd overall, to not make the NBA. Lucas played just one season at Florida before transferring to Texas, where he then spent some time as an assistant coach before recently taking the same job at Kentucky.

The 2008 recruiting class had eleven prospects fall from their high school ranking to after college position with two players falling from inside the top-30 to not even making it to the NBA.

Kenny Kadji played just two below-average seasons at Florida before transferring to Miami where he had more success. Kadji never made it to the NBA after being a highly ranked high school prospect.

Another Florida player just one spot ahead of Kadji at 26th overall in his high school class, Eloy Vargas had a similar path as Kadji as he spent just one year at Florida before transferring to Kentucky to play for two years, including a National Championship in 2012. Despite the championship run, Vargas still never made the NBA. Vargas also never averaged more than 1.5 points per game at either of the schools he played for in college.

The 2009 recruiting class had eight players fall from their high school ranking to their after college position with just two falling from inside the top-30 to out of the NBA completely.

Kenny Boynton played four quality years at Florida where he averaged over 12 points per game in each of his seasons. Despite a solid college career, Boynton went undrafted before playing a few years of international professional basketball.

Renardo Signey was suspended for his freshman year at Mississippi State and then played just two more seasons in Starkville before going undrafted in the 2012 NBA Draft.

The 2010 recruiting class had 12 different players fall from their high school ranking to their after college position with just one player falling from inside the top-20 to outside of the NBA.

Patric Young played all four seasons at Kentucky, but didn’t quite live up to his high school ranking and eventually never made the NBA.

The 2011 recruiting class had ten players drop from their high school ranking but fice of them fell from inside the top-30 out of high school to not making the NBA at all.

Rodney Hood played just one season at Mississippi State before transferring to Duke where he still managed to improve his stats and go in the first round of the 2014 NBA Draft. Because he was not drafted out of Mississippi State, I still count him as a missed opportunity as my records go for the SEC.

Despite being the highest-ranked recruit to sign with Ole Miss since 2003, Jelan Kendrick only played one season in Oxford before transferring to UNLV and eventually going undrafted.

B.J. Young played just two years at Arkansas before declaring early for the NBA Draft. Young went undrafted and signed a few short contracts to play in the summer league and D-League.

Kyle Wiltjer was the 20th ranked player out of high school and helped Kentucky win a National Championship in his freshman year. However, he then transferred to Gonzaga for his final two seasons before going undrafted in the 2016 NBA Draft and only played a few games in the NBA overall. Again, Wiltjer counts as a bust for Kentucky by my standards for this data and post, although I don’t think too many people in Lexington complain about his help in getting another championship.

The 2012 recruiting class had just four players fall below their high school ranking and just one of them fell from inside the top-30 to not making the NBA.

Devonta Pollard only played one season at Alabama before transferring to Houston for his final two years and eventually going undrafted.

The 2013 recruiting class had a total of 14 different players fall from their high school rank with five of them going from inside the top-30 out of high school to not making the NBA.

Robert Hubbs played four full seasons at Tennessee as a significant contributor, but never lived up to his high school ranking and eventually went undrafted.

Marcus Lee played three seasons at Kentucky before transferring to Cal for his senior season. Lee still never made it to the NBA despite being the 18th ranked player out of high school.

Kasey Hill played all four seasons at Florida but never scored more than 10 points per game in a season. As a result, he went from the 8th overall player in the 2013 recruiting class to never making the NBA.

Even worse than Hill, Walker was the 7th overall recruit and made it only two seasons at Florida, including several missed games and a late start due to NCAA eligibility issues. Walker eventually went undrafted after just two seasons at Florida and bounced around in various professional basketball leagues outside of the NBA. 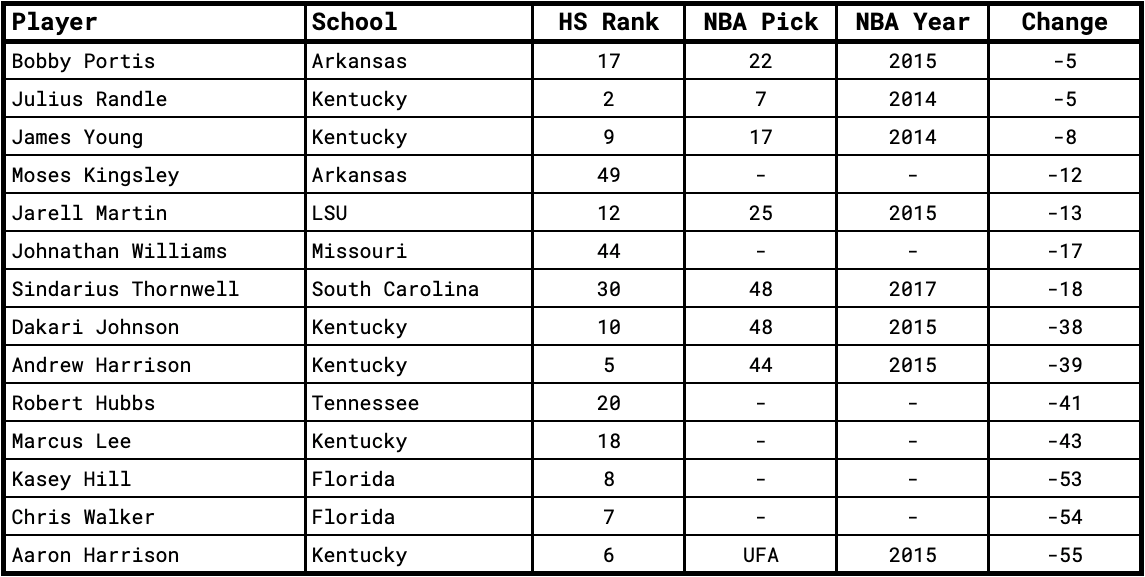 The 2014 recruiting class had eight players fall from their high school ranking, but none of the players that missed out on the NBA completely were in the top-30. Devin Robinson from Florida had the biggest drop, but he only went from the 18th ranked recruit to signing as an undrafted free agent in 2017.

The 2015 recruiting class had eleven players fall from their high school ranking but only two went from inside the top-30 to not making the NBA from SEC schools.

DJ Hogg played just three years at Texas A&M before declaring early for the 2018 NBA Draft where he went undrafted and only signed a summer league deal.

Malik Newman was the highest-ranked recruit to sign with Mississippi State since 2003 but he only made it one season in Starkville before transferring to Kansas where he still went undrafted. Newman has played one game in the NBA so far, but his transfer from Mississippi State still leaves a lot to be desired for the top recruit in their modern history.

For the 2016 high school recruiting class and on, it’s technically too early to call any guys a bust. From the 2016 class, there are players like Mustapha Heron and Sacha Killeya-Jones that were once top-30 recruits and are unlikely to get drafted this season, but I won’t call them busts until it’s officially official.

I now have a mostly complete spreadsheet covering SEC basketball recruits and paired with my spreadsheet on NBA Draft picks out of the SEC, this was the first series that I wanted to write on. I plan to have some other fun posts based on the information I’ve collected and will continue to collect, but I hope this was a nice look at players that have outperformed their high school recruiting ranking.

If there are other things that you would like to see based on SEC recruiting over time, please let me know on Twitter and I might answer your quick questions or make a series or post based on what you want to see.